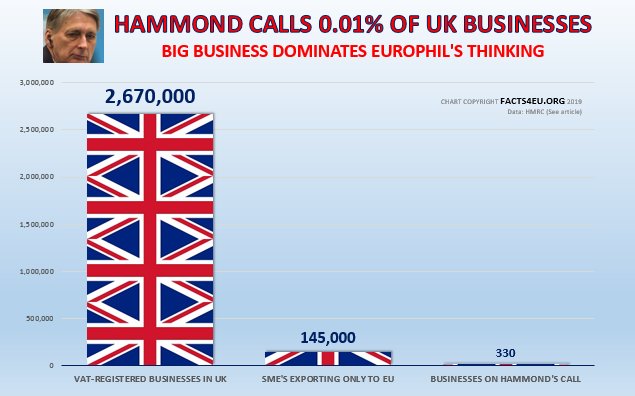 (See below for full chart and explanation.)

Brief analysis of conference call between Ministers and Big Business

Today the Daily Telegraph has exclusively published a leaked transcript of a conference call made by Philip Hammond and two of his ministerial colleagues to 330 representatives of big business in the UK, including the UK boss of German manufacturer Siemens.

We can’t bring you the entire transcript because of copyright law but we can quote from and comment on it.

A Treasury spokesman said that Mr Hammond was merely explaining the process by which Article 50 could be extended or revoked.

Here are just a few excerpts and our comments:-

“The withdrawal agreement will need to remain in place but there is flexibility to look at the terms of the political declaration on the future relationship.”

In other words, there is no intention to alter the terms of Mrs May’s catastrophic and legally-binding Withdrawal Agreement which makes the UK a serfdom of Brussels. The intention is to improve the terms of the ‘Future Declaration’, which is not legally-binding. The technical term for this is “Window dressing.”

“The second question is whether we can somehow take the option of no deal off the table.

“Everyone on the call will be aware that a bill has been tabled today and amendments will be tabled on Monday by backbenchers from across the House which would have the effect of removing the threat of no deal.”

Then, in answer to a question from the UK boss of German manufacturer Siemens, Mr Hammond responded:

“Jürgen, on the first part of the question what has been tabled today is a backbench proposal backed from across the House. We know it has been put together with active engagement from the clerks of the House. It is properly drafted.

“What it proposes to do is to create a parliamentary power to withdraw the Article 50 notice and to lay that on the table as a sort of ultimate backstop if the work the Government is doing in seeking to find a way forward fails to deliver.

And here is a small excerpt from the Business Secretary, Greg Clark:-

“Our purpose in the next few days is essentially to reflect all the things you have told us. First that we can't have no deal, for all the reasons you set out completely consistently.

“Secondly we need to achieve a deal that allows us at least as close a trading relationship with the rest of the EU as in the agreement that has been negotiated. That is vital.”

There were apparently 330 businesses on the conference call from Mr Hammond.

According to HMRC there are 2.67 million VAT registered businesses in the UK. 145,000 SMEs export solely to the EU, which is just 5.4% of the total.

Many readers will wearily tell us that the leaked comments from Messrs Hammond and Clark come as no surprise. This may be true, but when you read the entire transcript it is shocking just how clearly the Treasury and Business Depts are so in bed with Big Business over continued EU membership – or as close as they can get to it.

We would just like to remind Mr Hammond and Mr Clark that the vast majority of businesses in the UK do not belong to the CBI, whose Director-General was present on this call.

Brexit Facts4EU.Org campaigned vigorously for Philip Hammond to be excluded completely from Government prior to Mrs May forming her first Cabinet in 2016. We have consistently criticised him ever since.

We would invite both Ministers to speak to The Alliance of British Entrepreneurs, none of whose members and supporters share the Europhile illness inflicting the Treasury and Business Depts. They have been far more active in campaigning than their website currently shows. You can follow them on Twitter @AllianceBE.

They support what the British people voted for in record numbers in the official, “people’s” EU Referendum of 2016 – to leave the EU. They are also fully behind our #GoWTO campaign.

Help us to stop the rot in Westminster

It is increasingly urgent for MPs to be deluged with letters, surgery visits, emails and phone calls, expressing the absolute necessity of implementing the result of the EU Referendum in full.

We strongly urge all readers to act today. If you have already done something, do it again, or use another of the techniques contained in the Brexit Battle Pack which we launched last summer. The Pack is free to use and it contains many effective ideas and practical information for contacting your MP and the media.

Please also visit our Go WTO pages and please use #GoWTO on all your posts on social media.

If you haven’t yet done something, please do it today. The most effective method is to post our flyer (or preferably your own letter) to your MP. Let’s have their mailbags bulging so much that MPs can’t even squeeze into the Westminster offices!

I suggest that every business owner who wasn't involved in this, starts calling Hammond, Clark and Barclay today. Tell them that they obviously somehow forgot to add you to their list. Ask for a full and detailed explanation of the process by which Article 50 could be extended or revoked and also an exhaustive description of how exactly are they planning to fudge the #GoWTO option (or no deal, cliff-edge, crashing-point or whatever they currently call it) off the table.
That way at least we have a bit more insight into their secret society.

I should imagine most of the remainers in the 'bubble' are also secret society members.
I presume this story is true, and this helps people to understand fully the treachery that has been going on infront of our eyes and ears since the day of the most momentous democratic vote this country has ever seen.
I see no difference in Labour or Conservative, they have both created the mess that Britain is now in. Peter Bottomley for example wants to criminalize wolf whistling - to him that is more important that getting us out of the evil union! I hope the intelligent voters vote them all out of parliament.
Maybe the Queen could be asked nicely to dissolve parliament until the 30th March 2019, that would be a reason to be proud of her rather than her majesty's so called government which one cannot be proud of.

Our so-called Government & Parliament (with a few honourable exceptions) really are a nasty piece of work. Do they really think that they can veto democracy & it will be ignored? They've been EU patsys too long.
When I voted to leave the EU & for our laws to be made by our elected representatives for our benefit & in our interests, I didn't realise that quite so many MPs didn't want the job & are also incapable of doing it. There needs to be a cull of the incompetent & 5th columnists.
Parliaments at key points in our history have gained descriptive names, e.g. Long Parliament, Rump Parliament. I would suggest that historically that this Parliament is called the Quisling Parliament.

The evil machinations of our not-fit-for purpose politicians are becoming ever more immoral. Many friends who have never been political are utterly disgusted and voicing the opinion that all three main parties should be swept out of office immediately. The only principled political party, which is passionately committed to a clean break from the EU is UKIP; so there IS a choice!

These three are traitors to the People, traitors to their Party, and traitors to Her Majesty. Their punishment:? Stripped of office and banned from ever entering the Palace of Westminster. Time to clear the chaff from the wheat. Only the honest and true will be allowed to represent constituents. An achievable Utopia, if we all have the will for it to be so.

Some great comments on this and I am in full agreement. Sadly I am no longer surprised at the skulduggery this is par for course of these 'Conservatives'.