Even the EU only claims deals with 36 countries are in force, and that's optimistic 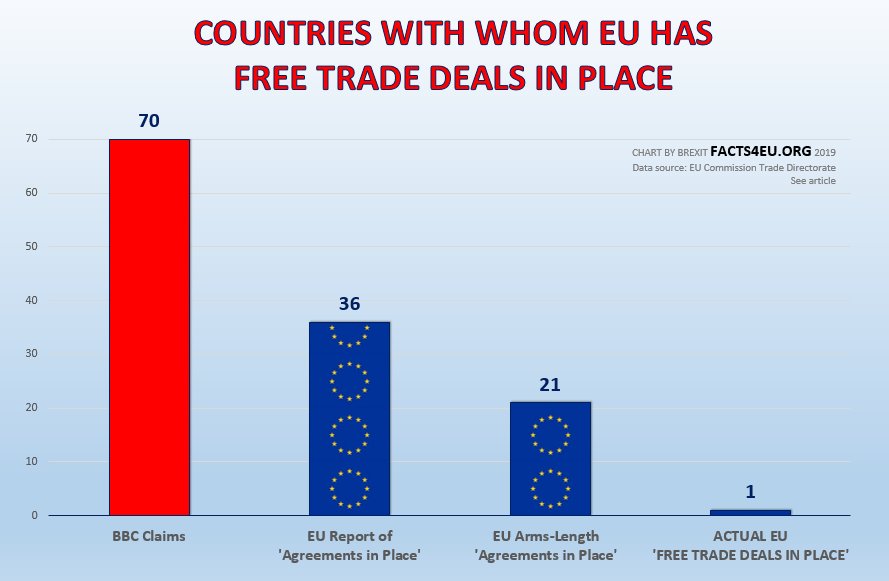 “The UK is seeking to replicate about 40 EU free trade agreements, covering more than 70 countries.”

“The UK is party to around 40 European treaties, covering trade with more than 70 countries and making up 12% of the UK's total trade.”

Reality: Today the EU claims ‘agreements’ with only 36 countries are ‘in place’.

This is half the number of 70 countries spoken about by the British media.

The vast majority of these are tiny or meaningless. Very few of these are what might be called Free Trade Agreements.

The only trade arrangements of any significance which the UK might wish to replicate are with Switzerland (completed by Dr Liam Fox yesterday), South Korea, Japan (only just signed by the EU and not yet completed), Canada (not yet ratified by EU), Norway, Mexico and Israel. Norway is part of the EEA and therefore should be a discussion amongst friends.

Looking at the above table, and without in any way wishing to be disrespectful to many of the countries on the list, where’s the USA? Where are Argentina, Australia, Brazil, China, India, Indonesia, and Saudi Arabia? (All members of the G20.)

What on earth would they expect? The majority of the countries on the EU’s list of ‘agreements in place’ would barely be noticeable if for any reason they chose not to replicate the deals they have with the EU. Indeed, in many cases these ‘deals’ come at a net cost, such as those with EU-accession countries where the EU actually gives these countries billions and which the UK taxpayer part-pays for.

Do journalists expect Dr Liam Fox to give the same weight to tiny Moldova with whom the UK does virtually no business, as to Switzerland, with which the UK does a lot of trade?

The propaganda is relentless

British journalists who want to present the EU as some form of Holy Grail are ably assisted by the EU, which puts out a daily stream of propaganda. Many journalists seem to read the first few lines, and this is what is presented to the public.

It doesn’t take long to drill down and see the true picture, but the real facts don’t fit the narrative, and so are ignored.

Yesterday proved to be a classic case in point

When we started reporting on this three years ago, the EU claimed just six ‘free trade agreements’. After attention started to be focused on this area of EU incompetence during the Referendum campaign, the number of ‘agreements’ which were listed by the EU steadily multiplied. Soon all manner of loose ‘co-operation agreements’ started to be included, as readers can see above.

Even with agreements which aren’t free trade agreements at all, the EU can only list 36 countries with whom something is ‘in place’.

Most British journalists don’t seem to understand one fundamental thing. It is not necessary to have a Free Trade Agreement with a country in order to trade with it successfully.

Currently the top country taking UK exports is the USA. Not Germany, not France, not even Italy. For years the USA has been the UK’s biggest customer.

Thanks to the EU’s incompetence at negotiating trade deals, they couldn’t even manage to conclude a US deal when the europhiliac President Obama was in power.

A full, clean World Trade Brexit on 29 March means that the UK can finally deal with the World on its own terms in the interests of the British people, not in the interests of French farmers, Spanish orange growers, or German washing machine manufacturers.

Whether we negotiate free trade deals, reduce our ‘most-favoured’ tariffs for WTO trade, or a combination of the two, the UK’s trading future will be full of possibilities for British business and British success.

Please tell your MP by using our #GoWTO campaign. And please donate so that we can bring you more facts like these above, and so that we can carry out far more campaigning in these vital days for Brexit.

[ Sources: EU Commission Trade Directorate ] Journalists and politicians can contact us for the full list of links, as usual.

From the beginning the EU kept saying that the UK can not sign any future trade agreements, or even have discussions about trade agreements until we've left. It is clear now that this was just another lie.
Why am I still surprised whenever something else the EU states turns out to be complete b****cks?

Another good piece nailing another lie.
"Quis custodiet ipsos custodes?" (Who will guard the guards themselves?) indeed.
The Guardians of "the truth" have most certainly & most publicly morphed into the infamous 'Ministry of Truth' depicted by their ex-employee, George Orwell, in 1984. It has become nothing but an agenda pushing propaganda machine where its broadcasts have become virtually unwatchable. Even their previously well-deserved reputation for historical accuracy in drama has succumbed.
The daily lies of omission are too many to count. Apart from ignoring any positive news about our exit, and if they can't avoid it append 'despite Brexit' or otherwise downplay it, just where are the reports of what's going on in, or even the impact of our leaving, their beloved EUtopia? It's certainly not good news. Errors of fact by remoaners are never challenged, yet those standing for the leave argument are not allowed to finish a sentence, or the facts are deflected with whataboutery. Brexiteers are 'named & labelled' Brexiteers often prefixed with descriptive adjectives in a derogatory manner, as if they represent a minority viewpoint, which doesn't happen with 'remainers'. They also 'sandwich' Brexiteers, ensuring that they are preceded and followed by remainers, hoping that the 'middle part' of the segment will be lost as most people will remember the beginning & the end. News is now the opinions of their 'reporters', & don't get me started on fake & manipulated 'evidence' & 'hit' pieces.
Note to the BBC & other broadcasters - Leaving the EU WON the referendum and are the MAJORITY. The only time that Brexiteers represent a minority is as contributors to your biased programming. Like many pollies, you've gone past the point of recovery of trust, & are no longer fit for purpose. I don't know many who take you seriously any more.
Nb. Have the BBC ever explained what their 'EU' funding is provided for?

Harry, 47 years of lies and counting. and so many voters oblivious to the lies and deceit....... after the 29th March 2019, I hope they can tackle the socialist agenda and bring back the Conservative party. Currently we have ConLab and nought else ruled from tiny Brussels.

Our condescending UK media is just as good at peddling fake news as other outlets around the world and even better at lying to the population.

Never trust any site with an agenda... Try this one.
https://fullfact.org/europe...
REPLY FROM BREXIT FACTS4EU.ORG
Seriously? Fullfact doesn't have an agenda? At least we say openly that we present the positive case for Brexit, to counter the overwhelming anti-Brexit bias from the media.

TO BBB, the facts are above and they are the EUs own facts.