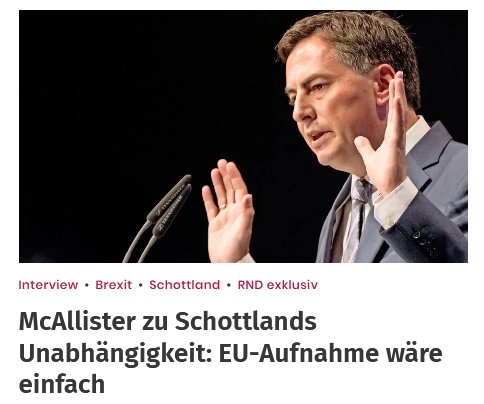 Brexit Facts4EU.Org goes beyond the headlines, revealing what he ACTUALLY said

Yesterday the Chairman of the EU Parliament’s Foreign Affairs Committee – and an ally of Chancellor Merkel – gave an interview to a major German news organisation, which has been reported overnight as suggesting that Scotland could rejoin the EU “very quickly”.

No doubt Mrs Sturgeon and the SNP will be using this story in their continuous propaganda fight for another referendum on independence for Scotland, as a result of Brexit.

Before they do so, readers may wish to consider the following:-

No, Scotland would not be able to join the EU quickly

Interviewer: ”Could Scotland become a member of the EU again very quickly after a referendum on independence?”

Herr McAllister: ”That is currently a theoretical question. The first requirement for this would be that Scotland become an independent state. Since the EU legal system is part of the United Kingdom in Scotland, an admission procedure would probably be shorter than for a country that has to gradually move closer to the EU in legal, economic and political terms.”

NOTE: At no time did Herr McAllister suggest that Scotland could join the EU quickly.

For German speakers, the full interview is here.

What would Scotland be facing?

How long does it take a country to join the EU?

Croatia signed the initial ‘Stabilisation and Association Agreement’ with the EU on 29 October 2001. It then took 12 years of negotiations and dramatic and forced changes in the country’s public finances before it was finally able to join the EU on 01 July 2013.

There are so many obstacles in the way of a theoretically independent Scotland joining the European Union, it’s hard to know where to start.

Above - purely in terms of the basic process - we have debunked any claims by the SNP today that Scotland could quickly join the EU after Brexit. Indeed this is not what Herr McAllister said. As a German who is proud of his half-Scottish ancestry he merely indicated a hope that Scotland’s EU accession process might not take as long as it usually does.

If readers are interested, tomorrow we could demonstrate with some simple and official facts and figures from Scotland’s own devolved government why the EU’s and SNP’s clear desire to break up the United Kingdom is not based in reality.

If any pro-Union Scots were considering donating to keep us going, now would be a good time. Quick and secure donation methods are below. Thank you.

[ Sources: Redaktionsnetzwerk Deutschland (RND) | EU Commission ] Politicians and journalists can contact us for details, as ever.

Any country now joining the EU, must be desperate for the promised 'land of milk and honey', I find no other reason remotely feasible as I can think of no advantages to becoming part of the new EU-USSR least of all the euro.

"If readers are interested, tomorrow we could demonstrate with some simple and official facts and figures from Scotland’s own devolved government why the EU’s and SNP’s clear desire to break up the United Kingdom is not based in reality." - Please provide these facts and figures for me tomorrow. Many thanks

Colin, there's a tome produced by the Yes camp in the 2014 referendum which had serious problems - oil revenue estimates for a start. Currency.
As a Scot, if I were pro Scottish independence (which I might or might not be, I'm not saying here), I would not want the campaign led by Scotland's current government team, particularly with what is going on in the health service and education up here.
And as a Scot, I would be furious to be led back into the EU. EU membership and independence are a contradiction in terms.

I assume that most of the people who read this site consider themselves to be democrats and believe that those in charge should deliver the outcomes that people vote for, so if the people of Scotland are granted a second referendum and then vote for independence then that is exactly what they should get. However, there needs to be a cold, clear eyed analysis of what independence would entail for the Scottish people, and the UK government shouldn't resort to devolving further powers to Holyrood in an attempt to bribe the Scots to stay in the UK, as we have seen that that just doesn't work. Nor should they be afraid to lay out the cold hard facts for fear of SNP accusations of bullying, which for sure they will. As to whether indy Scotland could rejoin the EU quickly or not, I really don't care either way, as Scotland will be a separate country and that will be a matter for them. However I do think that the Scottish people deserve a definitive answer on that from the EU before they vote.

Project fesr ramping up sgain. Carney and the EU making pronouncements. Boris do not alliw the communists to win our country.