Ms SOUBRY, DO YOU HAVE THE FIRST CLUE WHAT YOU WANT TO REMAIN IN?

BrexitFacts4EU.Org presents one small example of what ‘Remain’ means

There is no status quo with the EU. It spreads like a cancer growth, invading deeper into our national life. It is also constantly seeking to expand its empire. Here is just one small example of this.

A little discussed part of the EU’s work and the money it spends is its constant preoccupation with growing in size. Part of the EU budget is dedicated to this and the sums are significant.

The Instrument for Pre-accession Assistance (IPA) is the means by which the EU supports the 'enlargement countries' with financial and technical help. 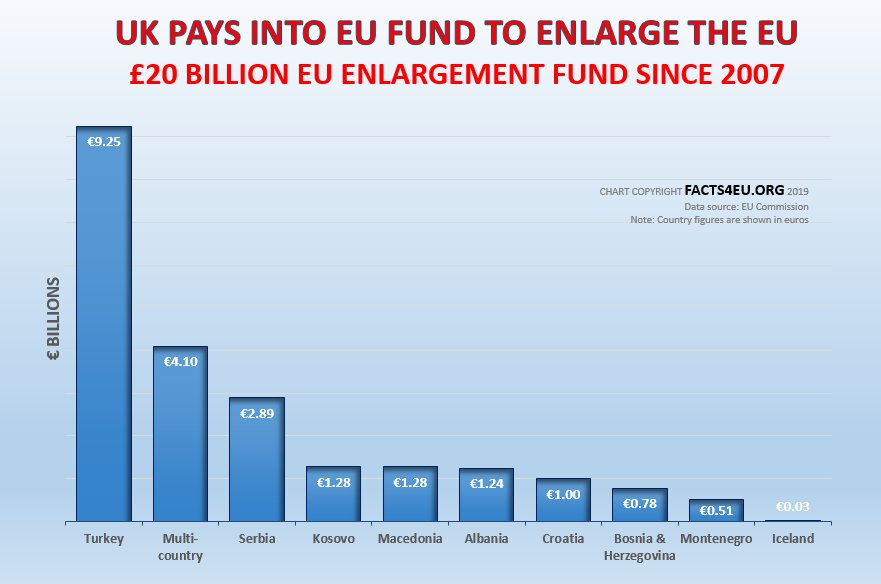 This sum is IN ADDITION to the €6bn which the EU is giving to Turkey to stem the flow of migrants to Germany after Frau Merkel’s disastrous ‘All welcome here’ unilateral announcement in 2015.

Here are the totals for all countries receiving this largesse :-

Note that these figures do NOT include the €6bn paid to Turkey as a result of Mrs Merkel's migrant crisis.

The EU is the only club that pays you to join

In most instances of a club welcoming new members, it is the prospective members who have to pay a joining fee.

This is not the case with the EU.

It's the EU that effectively now pays the prospective members to join. Please note that the UK received no such payments to join in 1973.

Strangely, when a country wishes to leave the club, the EU insists on what is a effectively a leaving bill. For the UK, Mrs May has so far agreed to £39 billion, but there is no limit on this and we are certain it will be much, much higher.

As part of this bill, Mrs May has agreed to continue footing the bill for the EU to grow its membership.

This is one of the enormous number of areas of the EU's activities where it seems wholly inappropriate - whatever the other arguments - to pay anything towards the EU's efforts to subsume even more of the European continent into its totalitarian nightmare.

If you were to ask a typical Remainer MP – such as Anna Soubry, Dominic Grieve (recipient of the French Legion d’Honneur), Chuka Umunna, Yvette Cooper, or Ken Clarke – about facts like those above, we suspect they wouldn’t have a clue.

Don’t forget, Ken Clarke is the man who even boasted that he had never read the latest EU Treaty, and yet vigorously supported it.

In what world is it acceptable for our supposedly-knowledgeable MPs to dictate our lives on something as important as EU membership when they don’t know – and certainly never quote – any real facts about it?

The EU isn’t static. It changes so fast that we have trouble keeping up with it. MPs have researchers. They have the House of Commons Library. They also have access to the internet like the rest of us.

Frankly, many of our readers are much better informed than our MPs. These MPs should hang their heads in shame.

I would agree with this "Frankly, many of our readers are much better informed than our MPs. These MPs should hang their heads in shame." However, I think many in the 'bubble' or swamp as some people prefer to call it have no morals left. So one should not be surprised at their weakness to lead or even to make decisions that are to the benefit of a decent society. All of that is lost in Westminster which is just a rubber stamping machine for crackpot diktats received from Brussels.
Europe is on the way to a third world war starting in Europe yet again if it continues with the stupidity of open borders and all the other EU madnesses.

Just watch the European Election and Local Election results! That should wake these slumbering, ignorant MPs who try to keep us in the EU. That should concentrate a few minds!

A verifiable comment made by just one of the traitorous, ignorant HYPOCRITES featured above, one Anna Soubry, quote:
"I believe the EU has become a huge, overly costly bureaucratic organisation fundamentally lacking in both DEMOCRACY and ACCOUNTABILITY to the many millions of people who pay for it through their taxes and who are BOUND TO LIVE BY ITS RULES"
Anna Soubry 2011.
The information detailed on this page will be sent to each and every one of those featured above, together with the above quote.

Good on you Barbara!
I guess these careerist, posing, truth-twisting MPs worked out that as long as they are close to the centre of power, this EU anti-democracy is good for them, and they can't care less about us.

1) That Mrs May in the Withdrawal Agreement agrees that the UK will continue to pay into the EU's pre-accession honeypot is surely further indication of her bad faith in the negotiations. In what possible way can these payments benefit the UK outside the EU? (Or indeed inside the EU?)
2) Do we know if Ken Clarke has read the Withdrawal Agreement? Bet he hasn't. He certainly revealed his ignorance about customs unions when intervied by Andrew Neil, I gather.

Remainers generally fall into 3 categories:
1. Those who have a rose-tinted view of the EU, but don't really know any of the facts. Soubry falls into this group. I saw her present her own show on LBC a while back (she must have escaped from her padded cell), and it was obvious she was completely barking and deluded, almost as insane as May.
2. Those who have a direct financial vested interest. Examples would be Heseltine, who gets £90k/ann to subsidise his farms, and Hammond who relies on cheap East European labour to make his Castlemead property development company viable.
3. Those who receive 'sponsorship' from Pro-EU corporations. Most Tory MPs are in this group, and of course the Tory Party is heavily depended on Pro-EU corporate donations to survive.

This is what the EU does bribe the "Elites" the powerful and those with a platforrm to support its aims , and it does so with the money of the oppressed, powerless , voiceless
The expansion eastwards can only cause friction with russia, hence the need for the EU army.

Yesterday on TV I saw a Labour twit calling the ERG - Nazis! For his education Nazi = National Socialist German Workers' Party!!!!!! He being a Labour MP seems to have forgotten Labour party doesn't mean Conservative. What a mixed up man to say the least.
ERG members are about as far away as one can get from the Nazis. On the other hand Momentum members are much closer.
It is highest time that these stupidites were called out for everyone to see and learn.
The Labour party doesn't give a fig-leaf for the working people of this country and have not done so for many years.

The ERG stand up for the Leave vote. By extension then Leave voters are "Nazis".
Ironic that many on the left are indistinguishable from the Fascist right and adopt the same tactics: smear democracy and democrats, gag free speech, manipulate the media, whilst at the same time claiming to be "liberal" and representing the majority!

Re Concerned Expat's comment and my own. I've just read that the Labour MP in question is David (if anyone disagrees with me they're a racist) Lammy.
You're a bigot Mr Lammy.