Proud to be British : The eight young men who stood tall for Her Majesty

2,702 military personnel were majestic yesterday – but eight stood out 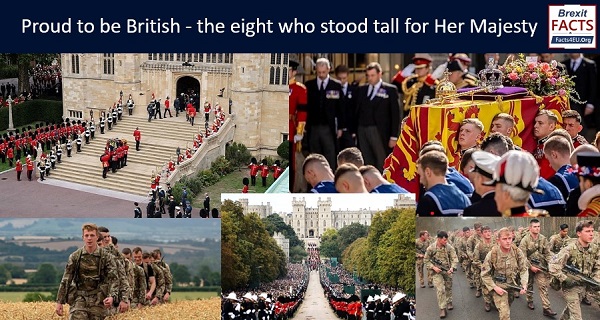 Facts4EU.Org pays tribute to the role of the men and women of the UK’s armed forces

Yesterday was an emotional day for millions of people, not the least of whom being His Majesty King Charles and the members of the Royal Family. However, eight young men serving the Crown carried an additional burden.

Amongst the 2,702 military personnel who took a public role in the greatest state funeral the world has ever seen - and the thousands more in the armed forces who backed them up - eight Guardsmen took on the heaviest responsibility.

These eight young soldiers were talismans for the entire contribution of the armed forces in making a sad day special and we pay tribute to them and to all those who took part.

In this article we refer to eight Guardsmen but in fact the bearer party totalled 12. We are singling out the eight because they bore the heaviest burden in every sense.

As the serving monarch, Her Majesty Queen Elizabeth II held the position of Company Commander of the Grenadier Guards’ Queen’s Company.

The Grenadier Guards' relationship with Her Majesty The Queen during her remarkable reign was a special one. Whilst the troops of the Household Division were charged with guarding Her Majesty and her palaces through her reign, it is the Queen’s Company who oversee the transition from one monarch to the next and undertake the exceptional role of guarding Her Majesty’s body in death too. Their 12 very best soldiers were selected to provide the bearer party at Her Majesty’s funeral.

The officers and the pall bearers performed their duties with precision and respect.

These are real soldiers who go into combat

There will no doubt be millions of people around the world who think that the military personnel they witness on occasions like this have only ceremonial duties. This is emphatically not the case.

The Guardsmen who carried the Queen’s coffin yesterday are active soldiers who were called back from duties in the Middle East for this sombre duty. They then rehearsed day and night until they were able to carry out their duties to perfection. And perfection it was. 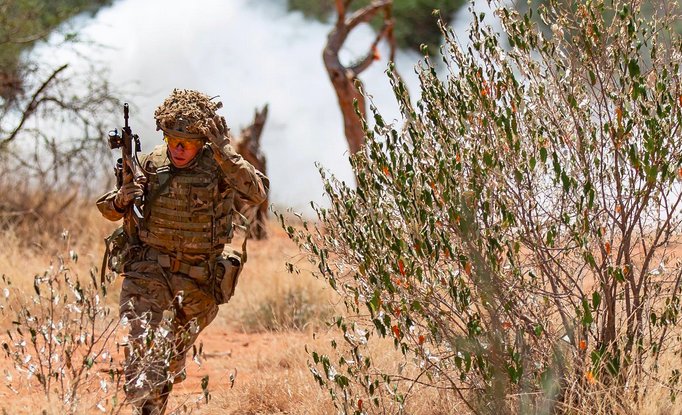 About the Grenadier Guards and their defeat of the French

The Grenadier Guards, as the most senior regiment of Foot Guards, have a rich history. They were formed as a Royalist Regiment in 1656 while King Charles III’s preceding namesake - King-in-Waiting Charles II - was in exile in Bruges after the English Civil War.

Previously, it had only been the Grenadier Company of the First Regiment of Foot Guards that wore the bearskin caps. This was a move that was subsequently embraced by all the British Foot Guards Regiments.

Yesterday it was if the world stopped for Her Majesty Queen Elizabeth II.

In our – admittedly non-scientific – survey of international TV channels we could not find one that was not covering the event live, with most of the video coming from the BBC’s cameras. From Asia to the US networks and even to France’s TF1 and TF2, it was wall-to-wall.

Was this the most watched event in television history? We suspect so, but we’ll never truly know. What is certain is that the newly independent United Kingdom showed itself off in spectacular fashion.

From a foreign policy perspective our only niggle is with the seating of world leaders at the funeral service itself. This is one matter that should not have been left to the Palace. Whilst we understand royal protocols it was not in the United Kingdom’s best interests to dot them around, many rows back, seemingly at random. This will not easily be understood by our international friends.

The pride of a nation

Returning to a positive note, the brave Guardsmen who carried Her Majesty’s coffin so many times yesterday also carried the pride of an entire nation. They are ‘the Best of British’, representing the professionalism of all of the UK’s armed forces from all the services.

Gentlemen, we salute you and all members of the military who took part. You did Her Majesty proud.

God save the King.

[ Sources: Ministry of Defence | Queen's Company, Grenadier Guards ] Politicians and journalists can contact us for details, as ever.

Magnificent and mournful. God speed her majesty and God save the King.

I really felt for them. They were so precise, what an honour for them. It must have been nerve wracking with all those steps they had to negotiate. I found myself holding my breath. Bravo

There can be no doubt that Her Majesty served us proud and dutifully during her expansive reign. I for one applaud her, though as one day ends a new begins, with the about to be removed American contingency poking their nose into our sovereign business. A warning to Mrs truss, be careful with whom you would be advised by. You are to free the people from Northern Ireland as democracy dictated.

They were magnificent, weren't they? As were the rest of our armed forces. They certainly did us proud & merit honours.
The difference between the politicised, PC Westminster Abbey Service & the dignified St George's Service showed two worlds, as did the country's silent majority, of crowds & those in the queue, seen in raw footage paying respects versus the meeja-driven vision portrayed.
The Monarchy must remember that their unifying ability is solely because they are perceived as being 'above' the bickering self-serving & corrupt short-termism politicians. When they are seen as one & the same, they no longer serve the country. I hope that the King and his heirs take note of that, & stop promoting foreign vested interests & agendas.
The silent majority are not stupid. Silence should not be taken as acquiescence. The referendum showed that. The majority spoke and we're still waiting for that decision to be properly implemented.

No,4
Absolutely bang on!! Sort it out Liz, we are all watching!!

The people of Don ass and lughansk are to hold a referendum on their future on the 23 and 27 of September. Of course our politico will dismiss it (Serbia mk 2), although we have to understand that there will be a change of personnel fighting the Ukrainian forces (British and American special forces). This will mark an escalated scenario whereby many of us will need to be conscripted as Russia will never allow a defeat on what will then be home ground. This is a lesson from history and all propaganda aside will be repeated.
No one speaks of peace while involving us in a war with no winners, as the scale will make humanity the loser, again.
Make your choice Elizabeth Truss for the people of Britain and not the interlopers of the White House or history will judge you a corrupt fiend as it already has them

Hi one eye. Great to read the latest orc defending spam. Russia invaded Ukraine. UKRAINE is fighting back with their own army magnificently. Any so called referendum carried out under the guns of the invader is voided by the very threat of having to vote putins way or die. Russia has previous. History will judge the west and the UK by our determination to back genuine democracy and sovereign freedom. Russia is free to do what ever they wish IN THEIR OWN SOVEREIGN NATION.

Dear one eye … Russia lost the Cold War. And Russia will lose this war as well.