“Once more unto the breach, dear friends, once more” says our Chairman 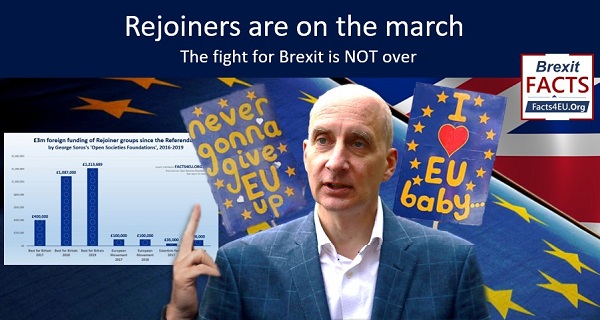 On Saturday the BBC, Sky News and ITN will no doubt be giving significant coverage to the “March to Rejoin”. Whilst most of the marchers will be from the extremist fringe, this march should nevertheless send a warning to all Brexiteers – the fight is not yet over.

In this report we bring readers up to date with news of the march. We may well be looking at the rump of the Remain movement but it’s very well-funded and very active on social media and in its political campaigning. And it’s clearly on the rise.

£20,000 for a single day’s output… The Facts4EU.Org team would love to have this sum for an entire month’s output, researching and publishing seven days-a-week. We count ourselves fortunate if we receive a total amount like that for six months’ work.

This is the tip of the iceberg, however. As we recently reported, foreign funding of Rejoiner groups stands at over £3 million. 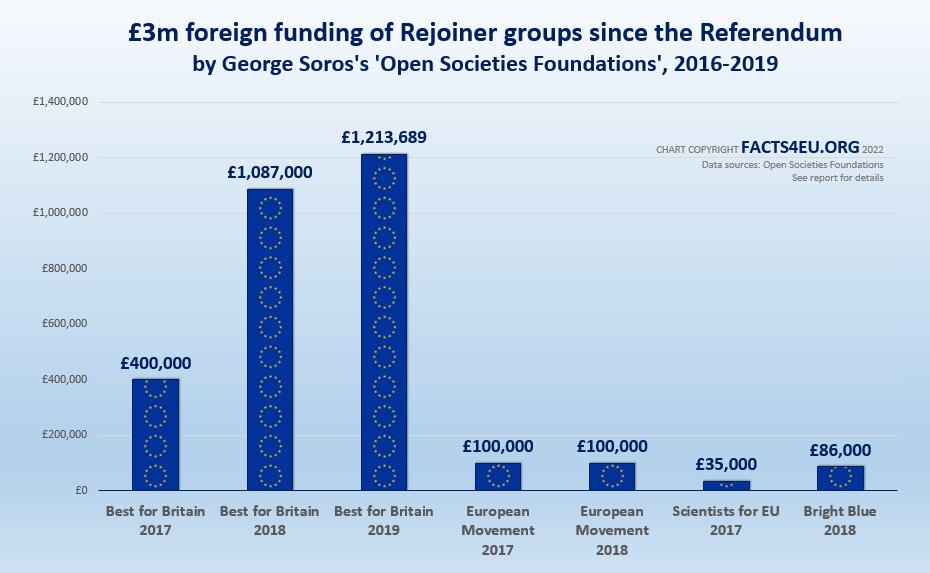 Note: We do not have details of any other funding that may have been received by these groups from OSF since 2019, nor the amount of funding from other sources.

Who is speaking on Saturday?

The first speaker is Steve Bray, whom readers will know as the constant irritant in broadcast interviews outside Parliament with his never-ending “STOP BREXIT” shouts.

Other luminaries include Femi Oluwole of the unfortunately-named OFOC group (“Our Future Our Choice”) and Madeleina Kay, who used to dress up as ‘EU Supergirl’.

Then follows a list of people we’ve never heard of until we come to one name: (Lord) Andrew Adonis.

Instead Tony Blair gave him a peerage and used him in various appointed government roles.

According to the march's website, 47 Rejoiner groups are backing this march. Whilst we have no doubt that some of these groups are tiny, it gives some idea of the scale of the anti-democratic rebellion.

We also found it interesting that the largest donor to their 'GoFundMe' web page continues to be Steve Bray (£1,500), despite him not having had a 'proper job' for all those years.

The irony of Rejoiner ignorance

Judging from the poor quality (and often abusive nature) of social media posts from Rejoiners and the absence of any facts on the ‘MarchForRejoin’ website, we doubt that the marchers will hear any real facts from the speakers.

If any of the speakers are brave enough to try, we doubt they will have done their research as we have done seven days-a-week for the last seven years.

The irony is that since 2016 Brexiteers have had to endure an endless stream of insults about being ignorant and poorly-educated. Brexiteers continue to be told they voted Leave based on some words on the side of a bus.

To be clear, we do not know of ONE single Leave voter who made their choice based on that slogan. 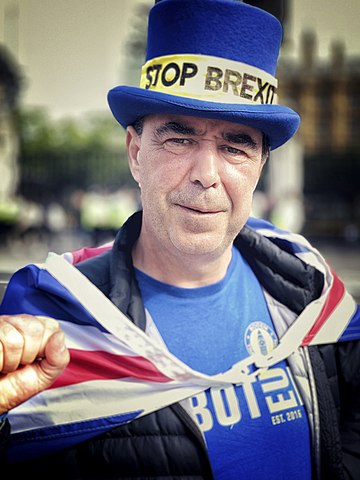 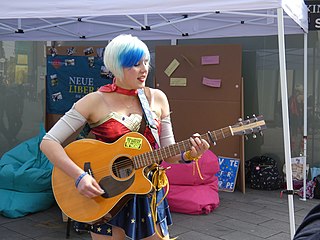 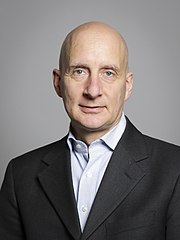 Many Leave voters made their decision based on overall instinct – and they were right, as the British public so often are. Many Remain voters also voted on instinct but many also voted based on the fear generated by the massed Establishment ranks and the government-sponsored campaign, prophesying an increasing panoply of Armageddons if the United Kingdom were to leave the EU.

Sadly, the fight is not yet over

Here is our Chairman :-

“One more unto the breach, dear friends, once more…

“Brexit is not “done”, sadly. Not only do we have to ensure that the United Kingdom is reunited and that all of it is removed from the yoke of EU laws, we must also ensure that all the dividends from being an independent country again are realised as quickly as possible.

“Well, we’ve scarcely started, have we? I mean, it's still very disappointing. It's great news that we finally got out, despite Parliament's worst efforts to thwart the will of the British people. But we got out with a deal, which Boris Johnson had substantially revised from Theresa May, but it still left us under some elements of EU control, which I find deeply disappointing.”

[ Sources: The Rt Hon Sir John Redwood MP | GoFundMe | MarchforRejoin ] Politicians and journalists can contact us for details, as ever.

The fight for Brexit is over. You have Brexit and, frankly, it’s embarrassingly crap. You put a border down the middle of our own country. You made it harder and more expensive to trade with our nearest trading partners. You imposed a tsunami of red tape on British businesses - killing exports in many sectors to a market of half a billion people. You removed the automatic rights of British people to live, work and study in 30 other countries - making them 2nd class citizens on the continent. The removal of their free movement makes Britons the least desirable people to employ for those jobs - usually good ones - which require mobility. You ended friendly cooperation in science and destroyed a successful student exchange scheme - and became the crazy man of Europe. Meanwhile, on the home front, you ran out of people to pick crops and work in care homes. You had the worst inflation among big western countries. You had the highest Covid death toll in Europe. Your lawbreaking prime minister - who most of us didn’t vote for - surrounded himself with a bunch of halfwits for Cabinet ministers and lied for a living. You made it harder to deport brown people who arrive on dinghies and harder still for British people to go on holidays. You screwed over British fishermen by making it harder - impossible in some cases - to export their catch to Europe, for many of them their biggest market. You screwed over farmers by signing two appalling trade deals with Australia and NZ which benefit them but not us. You poisoned our politics - turning old against young, country against City, north against south, Scotland against England. You shat on our constitution, crashed our economy, rode roughshod over our democracy. Your Brexit is done.
But it’s an epic failure and we will not stop fighting until we undo it. The question isn’t if we undo it, it’s when. The Baby Boomers are dying out. As we say good riddance to them we say good riddance to Brexit too.

We voted out and confirmed that vote in subsequent elections....having seen the EU's behavior over Russia and Farming I cannot fathom why they still hanker to be ruled by the unelected and unaccountable Euro Fuhrer.

Very sad they do not except British democracy. Britain is OUT,people voted that way. Why should we have to ask 27 other countries to be able to do anything?

@Buster
Typical lefty who transferred his allegiance to the EU in order to fill the Marx shaped space in his soul, on the collapse of Communism. When the EU finally implodes, where will Mr Buster go to find his nirvana? Perhaps he will tell us.

1. Buster Thanks for giving us a preview of the insane ranting we will be hearing on Saturday, but I for one could have waited for the real thing.

Buster I hate to tell you the good news but the UK is out of the EU, if you wish to live in a society governed by the unelected Commision you will need to move to your Garden of Edan. As for myself I am happy living in a country I love, a country that thanks to the majority of like minded people wanted no part in being ruled by a group of unelected socialist politicions. However sour you feel at least you can vote for who represents you and if you lose well that's democracy for you

The March of the smarmy army, perhaps with all those civil servants massed in one place it would be easy for Mrs Truss to tell them to get back to work just by shouting