Facts4EU.Org analyses how much the NHS has benefited each week 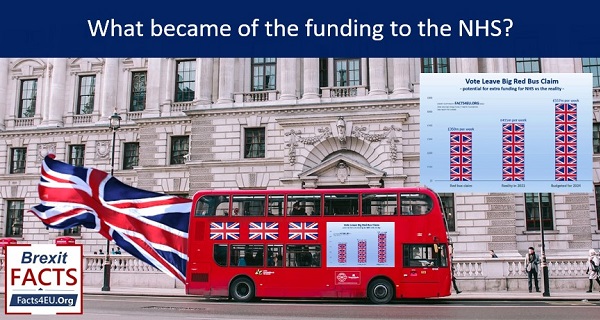 Spending figures show NHS can expect to receive £415m more per week this year – thanks to Brexit!

We all know how the big red Brexit bus became a focus of Remainer raspberries and ridicule.

The fact the figure of £350m per week emblazoned on its side was regularly contested, not just during the referendum but at every opportunity for the next three years, showed just how much it riled EU fanatics.

The £350m a week figure was irrelevant – the message was about making our own spending priorities – and being able to deliver them.

The number was contestable because it represented the gross payment due by the UK to the EU of £18.9bn divided by 52 weeks, rather than the lower net figure of what – after abatements and EU spending - it actually cost.

How the figure was arrived at was, however, never the point. The intention was to demonstrate that the money we sent to the EU could be spent on other things and that it would be for the British people – by electing their governments – who would have the say. 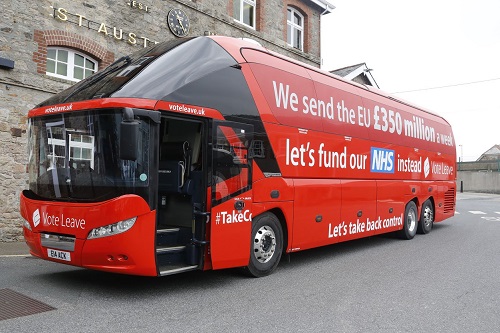 The actions of the Remainer Establishment cost the country billions

The fight by opponents of Brexit to disrespect democracy by preventing us leaving the EU dragged out our departure unnecessarily, costing the country billions and dividing the nation further. We only left officially on 31st January 2020 and we only ended the transition period with the Trade and Cooperation Agreement on 1st January 2021.

Through all of that period remainers supported the UK paying more money to the EU, be it our membership fees, the additional foreign aid commitments or any other funds going to Brussels – and of course backed the higher EU estimate of the ‘divorce settlement’ rather than that calculated by the UK’s National Audit Office.

But what became of the funding to the NHS?

Firstly it was never a promise, the Vote Leave campaign was not a political party and could not make a promise on behalf of others. Yet for all that the post-referendum Conservative Governments have been conscious of the importance of the £350m a week figure and both Theresa May and Boris Johnson made commitments to spend that amount.

Note: None of the following figures include Covid spending – all of that has been stripped out. We have also allowed for inflation, so these figures represent real spending increases. 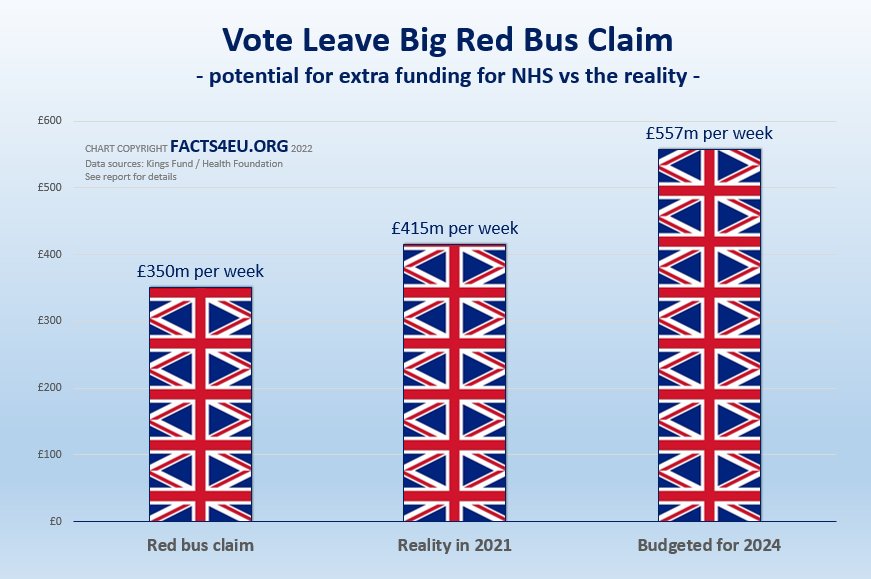 Spending higher than was hoped – even after taking out Covid spending

It does not end there, for the UK Government has published its NHS spending up until 2024/25 and by then it will have risen to £166bn – meaning an increase of £557m a week more than before the referendum (allowing for inflation).

No guarantees but the money is what matters

The extra money cannot guarantee our NHS will be able to meet expectations or be the best in the world – it simply means that after setting a priority that target was met. Maybe priorities will change, maybe we will want some reforms in the NHS itself?

Who knows, the point is the idea of the side of the big red bus – that we could take back control, save ourselves some money and spend it on other things – worked and has been delivered.

The big red Brexit bus will forever be a part of the EU referendum folklore and political history. People will argue over the amount on the side of the bus and if it was a truly representative figure. If it were the net figure it would have been £180m a week – but that sum missed out all sorts of other add-on costs that the remainers did not want to talk about – like the additional £1.3bn per annum given to EU foreign aid.

The truth is that the message was what mattered, not the number. The fact that people argued about the number only exposed the fact that we were sending millions a week to Brussels and brought it to more people’s attention. This campaign tactic was intentional and it worked, the remainers giving it more publicity than if they had simply kept shtum.

Now the figure has been exceeded we might hear less about it. And now we have the ability to determine our spending priorities we might consider what else needs changed.

[ Sources: The Kings Fund | The Health Foundation | Vote Leave ] Politicians and journalists can contact us for details, as ever.

Don't you just love that rejoiners constantly claim to know and tell you what your exact reason was for voting for Brexit? They often claim that it was this bus that apparently decided the vote... Wow, marketing managers I hope you made notes about effective advertising! The price of advertising on London buses must have skyrocketed, if rejoiners are right. I need to check.

Out of the frying pan into the fire - from one sinking pit of funding the EU into our own dire sinking pit of funding the National Covid Service - an utter disgrace in the last two years due to political interference and following Globalist agendas whereby the health of the people was the lowest priority (hence they banned known effective Early Treatments such as Ivermectin and Hydroxychloroquine). The money would be far better NOT spent and left in people's pockets. Brexit was about independence and freedom - let's now have more independence and freedom from all government interference.

The establishment remainer lies like 800,000 unemployed just for voting leave, and project fear and Theresa May and Ollie Robbins (got a knighthood-should be in jail) treachery got us here. Although we still haven’t got Brexit!
N. Ireland left behind, fishing industry thrown under the bus again. Where are the Freeport’s that were promised. Why are we still under the ECJ?
One thing that still wrankles with me is that remainers still go on about the bus lie! A high court recently conformed it wasn’t a lie in a court case and now confirmed here.
Thanks for the continuing hard work.

Someone who agrees with me:
https://www.telegraph.co.uk...

Interesting that people still believe what was not written on the side of the Brexit bus to defend their argument. Take another look and study the text.
Had it categorically said the £350m would go to the NHS, could you be so naive that you could believe it? We’re talking about utterances from politicians!

This is great news, but the naysayer in me wants to know the specifics of the "research". What research, where? Who did it, and when? Also, how do we absolutely 100% attribute the extra money going into the NHS coming directly from the money we would have spent had we remained in the EU, and is there a way to find out whether the costs associated with leaving the EU, do not make this increase a net loss? I ask, not to provoke, but because I'm genuinely interested and want to share this news, but I can already hear the Remainer counter-arguments.

Adam - As with my comment 4, I hope the new broom will be Lord FROST.
Instead, I expect we get Bill Gate's globalist mate, Jeremy Hunt.
God help us!
https://www.youtube.com/wat...

No no no. The amount is the message. If the amount is a lie then so is the message. Lie are always going to lie - the issue here is that the people who swallowed the lie are embarassed for falling for lies. You'd do better to avoid further lies than spend your lives trying to make true what was obviously a lie you fell for.