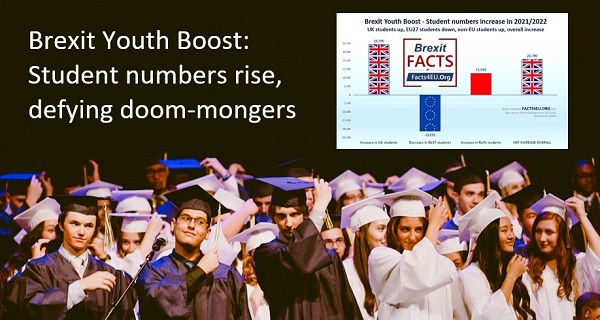 The official figures for students in UK higher education have now been published for 2021 by UCAS, showing an increase of almost 21,000 students enrolled since the UK left the EU.

Against all the usual doom-mongering about the effect of Brexit on our universities and colleges, it turns out that not only have student numbers increased but educational institutions are now able to benefit from greater incomes.

Numbers up, potential incomes up, EU27 subsidies down

Today we look at higher education and how removing the subsidies for EU students receiving tuition fees and student loans (that were often never repaid) is creating more places for British students - up by 29,390.

We also show how the UK is now treating all international students equally, with more non-EU students gaining entry - up by 12,595. 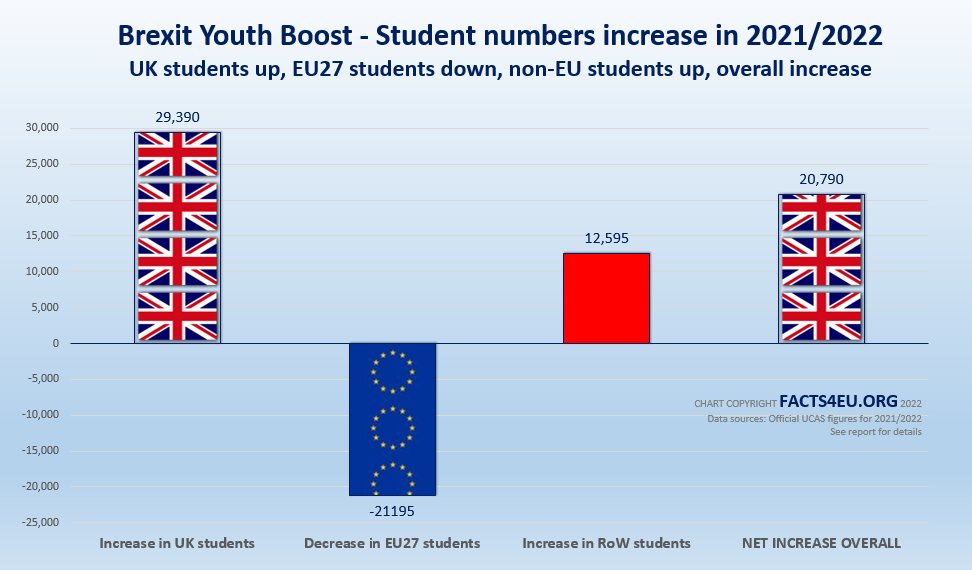 Following Brexit the UK can now charge EU citizens the same price as international non-EU students for attending UK universities. Previously, EU rules meant EU citizens at UK universities were entitled to the same lower fees as were charged to UK citizens. In effect, this meant the UK taxpayer subsidising EU students. In many cases, university fees are not repaid for many years – if at all.

Similar to the above arrangements for tuition fees, EU citizens were entitled to UK student loans on the same favourable terms as UK students in each jurisdiction. A 2017 study found that the UK’s Student Loans Company had failed to recoup £1.2 billion of loans from EU27 students, particularly those who had moved home or out of the UK after attending university. Very simply EU students were able to apply for loans knowing that they could easily avoid ever paying them back. This benefit to EU students has now ended.

The rule on tuition fees applied to the jurisdictions of England, Scotland, Wales and Northern Ireland charging the fees within the UK. Thus when the Scottish Parliament retained free tuition fees for ‘home’ students the same free fee arrangements had to be made available to EU students.

In one of the most partisan moves of the SNP Government in Edinburgh, students from England, Wales and Northern Ireland were not given the same free tuition as students from the EU – but were charged for their tuition. This policy has had to end from the academic year 2021/22 with EU students now charged the same international student rate.

The unintended consequence of this policy was that to afford the cost of ‘free’ tuition for Scots and EU students (as the universities still have to be paid for the student place) a limit was put on Scots’ student numbers. To make up for this ‘cap’ Scottish universities were giving preference to the more 'lucrative' English, Welsh and Northern Irish students at the expense of ‘home’ Scottish students being denied places.

Thanks to Brexit the UK can now more reasonably manage the cost to the public exchequer of providing English-as-a-Foreign-Language (EFL) lessons for free movement families.

Associated with the above is the unquantified but significant cost to the taxpayer of providing EFL in secondary schools for the children of EU free movement families.

It is interesting to look through the various economic and social studies conducted by universities and educational vested interests as they looked for arguments to defend open access to UK higher education for EU students. The focus was always on the loss of income to the universities or the economy and never on the savings to the hard-pressed British taxpayer who was to all intents and purposes subsidising EU students to study in the UK.

Yes, raising tuition fees to the same level that a student from Australia or North America would be expected to pay would inevitably reduce numbers and therefore university income and the generation of local economic activity. This, however, would be offset by the remaining EU students paying the higher international fee - in some cases significantly higher.

It would also mean the gap created by those EU students deciding that without a subsidy they would not come to our shores would be filled by international students paying the full fee. This is indeed beginning to happen. This latter cohort will bring significant revenues to British universities.

We recall the howls of anguish and protests in the early 80s when the Education Secretary, Mark Carlisle, allowed universities to charge ‘Overseas Student Fees’ at an economic rate compared to the domestic rate (that was ‘free’ but paid by the public purse). The protesters argued overseas students would be priced out of attending and numbers would drop – but the reverse happened. Universities recognised there was now a new revenue stream to be exploited and very quickly Overseas Students (now called International Students) mushroomed. The protests disappeared and were very quickly forgotten.

The point here is that those defending the open access to EU students granted through freedom of movement forget how discriminatory it was against students from Africa, Asia, South America, North America and many non-EU European countries.

Now Brexit Britain can treat all international students equally. The argument that our universities will be bereft of international cultures and life experiences is completely wrong. As a result of Brexit our campuses can now be even more diverse and culturally enriching for all the students attending. We think the figures in the table above show this is the direction of travel for our universities.

Another Rejoiner myth put to the sword.

You will NEVER hear the alternative to Rejoiner myths in the liberal pro-EU media and especially not the BBC, Guardian or Mirror. Facts4EU believes you should know the truth.

Our hard work in preparing these reports does not, however, come cost free, however…

[ Sources: UK Gov official statistics | Department of Education | UCAS ] Politicians and journalists can contact us for details, as ever.

So what are the numbers then? do we make more money now than we did? that question still remains and do you have an answer and figures to that as it seems to be conspicuously absent.

Bob, Facts4eu published articles about this subject with numbers. You clearly have missed them. Were you conspicuously absent? : )

Claire, I dont see any articles, they just have some flannel about contact us for details if you are a journalist, they cite no actual links to sources in here, again conspicuously absent. The wording in this article is also incredibly loaded, like students knowing they dont have to pay back loans, not saying a percentage just heavily insinuating that they are all going to avoid paying. This is highly dubious.

Bob, some numbers for your pleasure...
https://facts4eu.org/news/2...
And this is just one example, do your own research. But do make a bit of effort please, you seem to only read bits here and there. So I won't be wasting any more time replying in case you come back.

bob, WHY do you ONLY associate been better off with MONEY ??, we now have ELECTED ACCOUNTABLE politicians, which is PRICELESS, or would you rather throw away your democracy and that of future generations so you can have a few pennies more ?

EU student numbers dropped from about 50k a year to about 27k a year, as post-Brexit fees rose from about 9k a year to as much as 40k a year, so it is pretty clear that the total amount of income from EU students has gone up, even though there are fewer of them.
And the increased number of non-EU foreign students more than made up for the decline in EU students.

According to this morning's announcement, the UK economy grew by 7.5% in 2021. This is the fastest growth since 1945. Obviously there is a lot of recovery from Covid in that number, but that in turn just tells you that the drop in GDP in 2020 was due to Covid, not to Brexit. In fact, you can't see any significant drop in GDP that lines up with any specific Brexit date.

The second statistical release this morning shows that in 2021 exports of goods rose by 9.4% over 2020 while imports of goods rose by only 1.7%, leading to reduction of £20.5bn in the goods trade deficit compared to 2020. The UK almost always runs a deficit on goods trade and makes up for it with a surplus on services trade.
So the first full post-Brexit year shows a significant improvement in net trade and a decrease in the goods trade deficit.

Bob (1) - If you haven't already done so, may I suggest in future that you sign up to the "BREXIT INDEX" where you will find a wealth of factual information.