VIDEO EXCLUSIVE : Would Redwood serve in Government again? - “Of course” 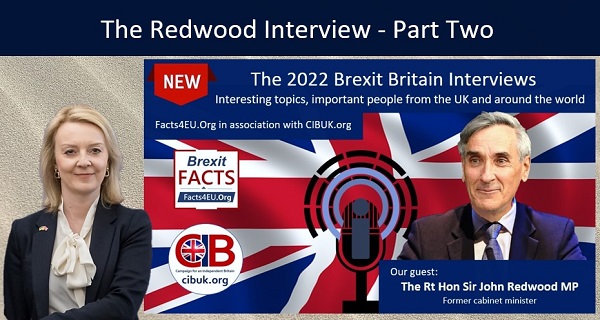 In an exclusive and wide-ranging interview for Facts4EU.Org and CIBUK.Org with the Chairman of the Campaign for an Independent Britain, the Rt Hon Sir John Redwood MP provides his thoughts on the multiple policy challenges now facing the government while the Conservative Party goes about the business of electing a new leader – and Prime Minister.

In the second and final part of this exclusive interview, the former Cabinet Minister discusses the Eurozone’s troubles, the UK’s over reliance on renewable energy as a result of Net Zero, policies on housing, legal and illegal immigration, an increased defence budget, and confirms he would serve in Government if asked by the new PM.

The video is below

This final part of the interview is 21 minutes long. Sir John does not pull his punches on some issues and we highly recommend it. Under the video below we have summarised some of what Sir John had to say.

1. The EU and its financial woes

In Sir John’s view, there needs to be a far more effective transfer payment system within the Eurozone from richer countries to poorer, to even out the levels of debt and help bring much needed stability to the bloc.

“The EU’s energy system is very badly damaged by its over-reliance on Russian gas.”

“Europe, led by Germany, needs to change its energy policies as quickly as it can.”

”If many more turn to electric vehicles and heating we are mighty short of capacity, were that movement to take off…”

“A whole of government task.”

Sir John is clear also that we need to review and reduce the numbers of legal migrants coming into the country. In his view this would be a double-win for the UK:

The task of controlling never mind limiting the numbers coming into the country is enormous, he says. It covers multiple departments and will require detailed and careful planning to address the issue. It won’t be easy and will take time to address it.

“We are not properly defended as a nation if we cannot make the necessary weapons and supply the necessary ammunition here in the event of a nasty war breaking out.”

7. Finally, if called upon by the new Prime Minister, would he consider a role in government? 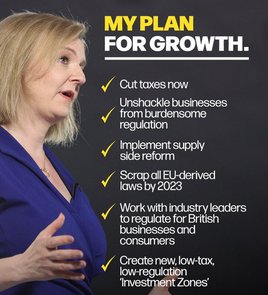 Sir John has been spoken of in some quarters as making an excellent new Chancellor, given his financial expertise and belief in a low-tax, high-growth economy. Some have questioned whether he would serve in a Liz Truss Cabinet if asked.

“Of course I would. But it’s for others to make that decision and make that offer, but I’ve always said that I’m very happy to help a Conservative government in any sensible way.”

The Facts4EU.Org and CIBUK.Org teams are grateful to Sir John Redwood for giving up his time for this interview.

He was forthcoming on so many issues that we decided to split the video into two parts, knowing that readers and our audience might only have 15-20 minutes on any given day to watch something like this. If you missed Part One you can watch it here.

Sir John writes daily for his website, called JohnRedwoodsDiary.com and we can recommend this for stimulating and thought-provoking information and arguments.

Interviews like this take a great deal of time and effort

[ Sources: The Rt Hon Sir John Redwood MP ] Politicians and journalists can contact us for details, as ever.

Redwood is far and away the best and most sensible choice.

Sort out the treasury

It will be funny watching him lose his seat to the Libs next time around, won't it?

Oh dear buster the Remoaner is back I thought you left for France on a dinghy with the tool Steve Bray ,Redwood would be a excellent chancellor better than anything the Traitor Party led by Starmer would appoint

Elizabeth Truss, get a grip of Blairs legacy throughout the institutions, preferably by the throat and remove it root and branch.
Your moment in the sun fast approaching, gives us our birthright and we will deliver your legacy. Too many are watching to continue on the path of predecessors, I sense a strength in you, whether or not you use it remains to be seen.
Long live freedom, long live the free