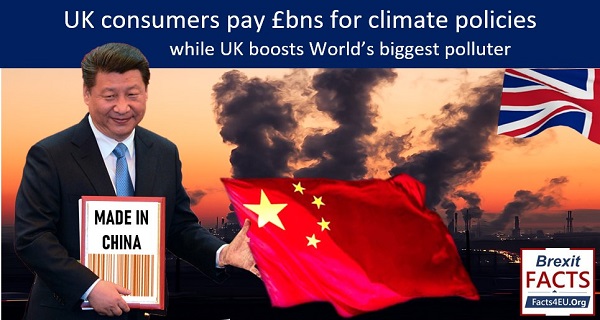 Why should UK consumers pay for China to keep churning out more and more CO2?

In just over five weeks’ time the UK will host world leaders, the UN, assorted EU bureaucrats, and many thousands of climate change lobby groups at the United Nations Climate Change Conference (COP26) in Glasgow. The United Kingdom currently holds the presidency.

This 10-day event will be an opportunity for Boris Johnson and his Government to showcase its leadership, in action on climate change. Readers may expect to see increasing coverage of the lead-up to this jamboree in the coming weeks, as well as saturation coverage by the BBC and Sky News during the event itself.

Over the past 20 years the policies pursued by the Chinese Communist Party (CCP) have seen a large rise in its manufacturing sector and in its exports of goods worldwide. In turn, China’s use of energy has increased enormously and this just continues to grow, with the building and commissioning of coal-fired power stations fueling the growth. This continues to this day, despite any token statements about climate change from the CCP.

To give some indication, Facts4EU.Org has analysed the latest figures from the Office for National Statistics, looking at the growth in imported goods into the UK from China. 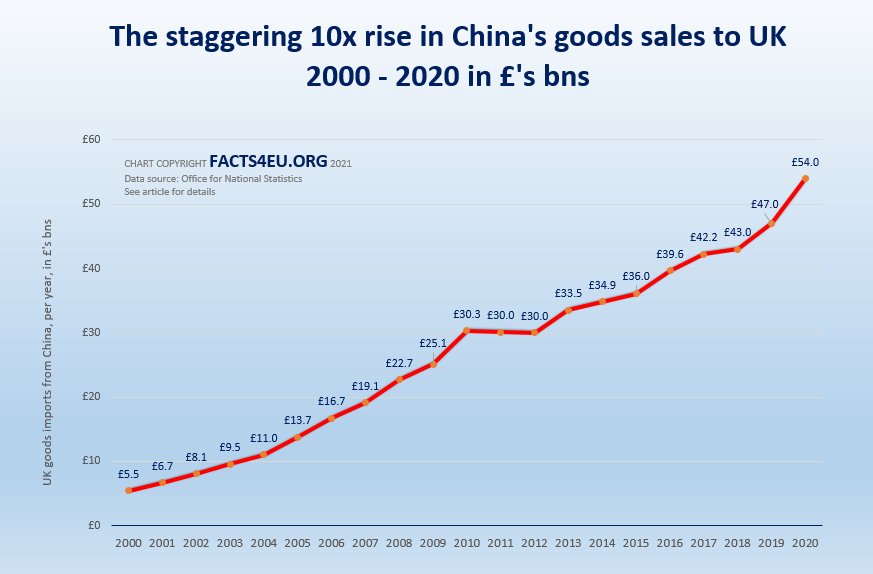 The number one source of CO2 is the burning of coal. And it is coal that is powering China’s manufacturing base, which in turn churns out the increasing quantity of goods sold to the rest of the World.

China’s responsibility in this area dwarfs that of any other country. Below is a chart showing the top 10 countries using coal-fired power stations. 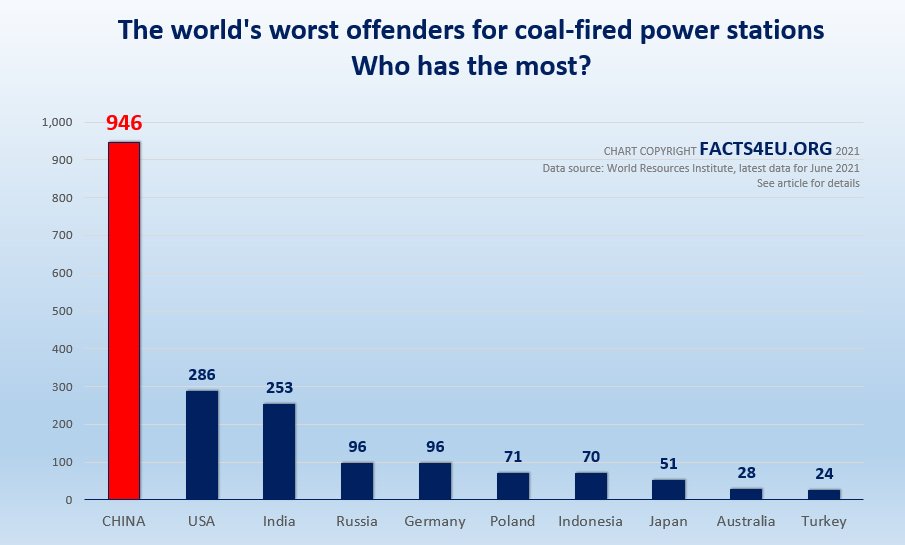 Finally, how clean is Global Britain when it comes to coal?

On this score, as in so many others, Global Britain can hold its head up very high. In fact, the UK's use of coal is now so tiny it would never show on any graph. To give some idea, China's coal consumption in 2020 was 423 times that of the United Kingdom.

Readers can read much more on this subject in the China report we published last month.

Global Britain is now looking outward, forging new trade deals around the World and – as we have reported in recent days – forming important alliances with partners such as the USA and Australia.

As the UK trades more and more with the rest of the World, instead of being locked in by its previous EU membership, it is perhaps time to review which countries we are prepared to do business with, and on what scale.

The British consumer is now being asked to pay more and more for the climate change policies of the Government, and these costs look set to increase considerably in the coming few years. As the UK feels the pain of switching out of carbon-based energy generation, it is worth remembering that the UK is responsible for only 1% of the World’s emissions, despite being the World’s fifth-largest economy.

Not only is China the World’s biggest coal-fired emitter of CO2, it shows little sign of cutting back drastically and thereby imposing hugely increased costs on its consumers at home. By buying increasing quantities of goods from a country like China, the UK is in effect merely exporting its ‘carbon guilt’ abroad. Emissions don’t change, merely the source of those emissions, and the global climate remains the same or gets worse – depending on whether readers accept the whole ‘climate change’ argument.

The question marks over China are not only about pollution, and they're growing

When the atrocious human rights record of China is included, together with its total disregard for international law, and its threatening behaviour to its neighbours, at what point must the United Kingdom reassess its reliance on that country and pivot with increasing urgency away from China and towards other countries?

We predict with a high level of confidence that China’s President Xi-Jinping will fail to show up at the COP26 world summit in Glasgow next month. If the United Nations were not as infiltrated as it is by Chinese influence, criticism would be forthcoming. Instead, it falls to other world leaders to express their ‘frustration and disappointment’ at what we expect to be his no-show. Boris Johnson and Joe Biden, over to you.

[ Sources: Office for National Statistics | World Resources Institute ] Politicians and journalists can contact us for details, as ever.

We need to boycott Chinese products. We're feeding a monster here. The sooner we refuse to let it grow even stronger the better.

Robert 1.
I totally agree and I try not to buy anything made in China, but it's so difficult sometimes. I Iook into where the goods are manufactured. But China has been busy buying so many Eur companies and trade under that name.

Boycott at once start manufacturing up in the UK - jobs and growth will follow!!!

I didn’t realise the Cop26 conference is to last TEN DAYS! Oh dear Lord, it’ll be unbearable…
It was bad enough listening to that stupid Kermit the frog ‘speech’!