In first 6 months of N.I. Protocol, Ireland’s exports to NI have jumped by 73%

EXCLUSIVE: Facts4EU.Org reveals how the South has benefited from the EU’s Protocol 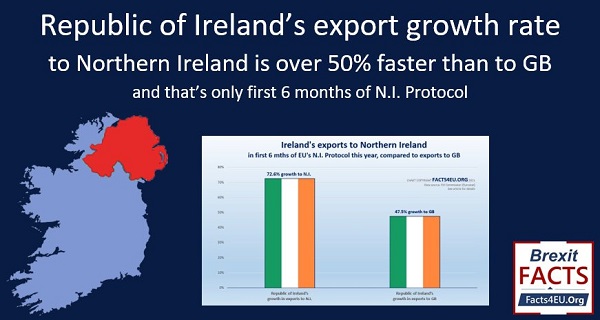 Ireland’s manoeuvres during Brexit have been about unification, but it’s done well financially too

Today Facts4EU.Org can reveal how the Republic of Ireland’s exports to Northern Ireland have risen since the Protocol was fully implemented on 01 January 2021. This has happened during a period when mainland UK firms have struggled to get their goods through to Northern Ireland, due to the EU's Protocol.

We also show how other EU countries have taken advantage, while many GB businesses have found it not to be economically viable to continue selling to what is supposed to be a sovereign part of the United Kingdom.

All exports worldwide have grown as Covid restrictions have eased.
Here we try to strip out the Covid element, by showing the export growth to NI compared to GB. 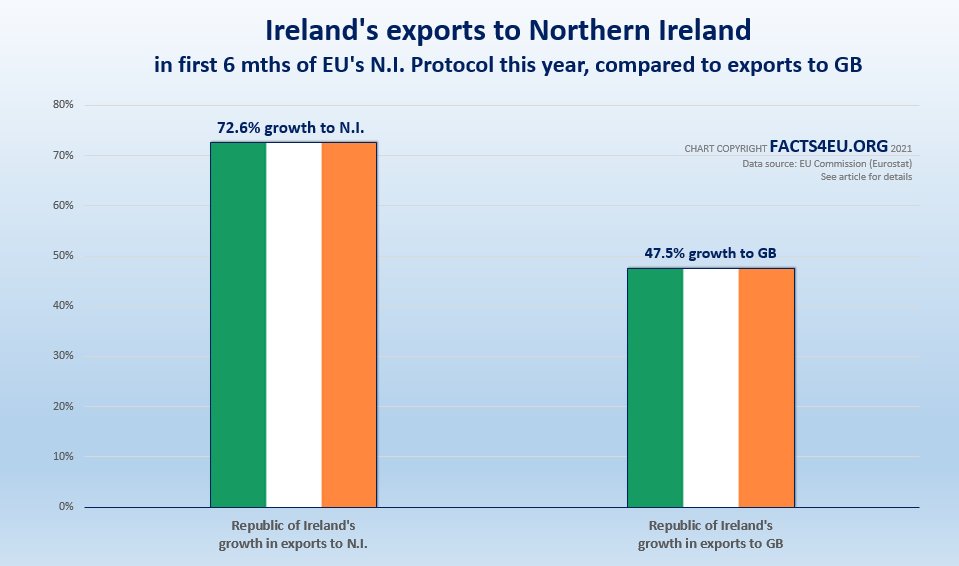 How have other EU countries done?

While countries in mainland Great Britain have had to deal with onerous EU bureaucratic demands to continue sending goods to Northern Ireland, including more than a hundred forms for a single lorry coming from the mainland UK, EU firms have not. It seems that many EU27 countries have stepped in to fill the gaps caused by the EU’s rigid application of the extreme requirements on mainland UK suppliers, caused by the EU’s N.I. Protocol.

Many of these mainland British firms have had to decide to discontinue supplying Northern Ireland. Meanwhile goods from EU27 countries have been able to sail through.

The Irish have made far more than any other country, but growth for other EU countries has been high

How other notable EU economies have increased their sales to N.I. in the first six months of 2021 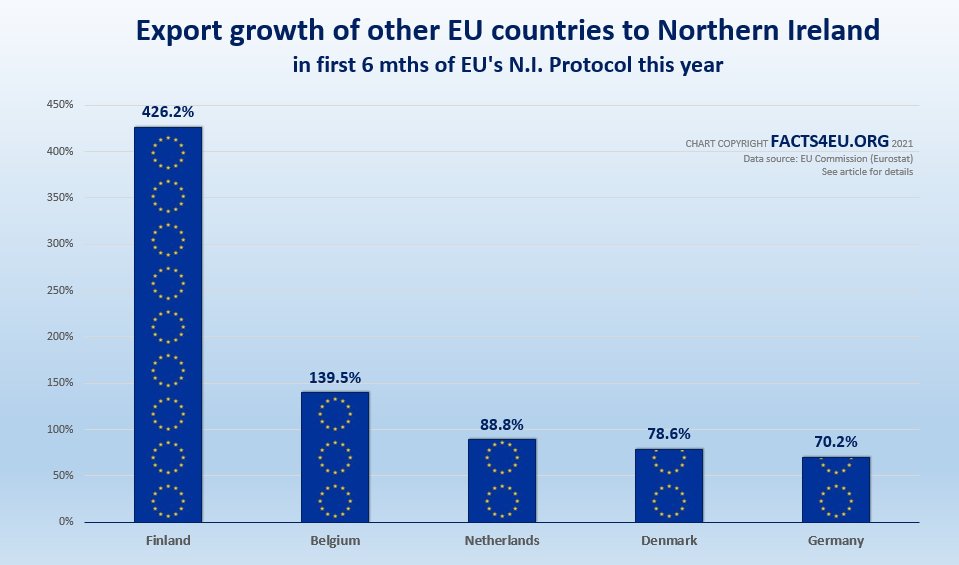 Statistical note: All data comes from the EU’s statistical agency Eurostat. We have not quoted the EU27 as a whole, as there is a very large statistical anomaly in respect of France’s data and we therefore believe the EU’s total is unreliable. (France’s sales to NI supposedly fell by 81% in March and have stayed at this level. At the same time France reports its sales to GB as having risen sharply in the same month.)

In the vast range of statistics that it gathers on almost every conceivable activity in the EU27 countries, the EU Commission stopped including the UK even before the UK formally left.

As Facts4EU.Org has reported on several occasions, many sets of data simply stop at 2019 when it comes to the UK, despite the fact that the UK was still a member up until its formal departure at the end of the Transition Period, on 31 December 2020.

One exception to this rule is in the case of Northern Ireland. Or, as the EU refers to it, “UK (NI)”. The reason the EU still collects statistics for Northern Ireland is quite simply because N.I. remains part of the EU, as far as the EU’s Single Market and Customs Union are concerned.

As a result, today Facts4EU.Org has been able to bring readers the facts from the EU itself about the large rise in the value of goods which the Irish Republic has exported to Northern Ireland since January, when the N.I. Protocol became fully operational.

The last time we looked, Northern Ireland was still notionally part of the United Kingdom. That is certainly how it still appears on world maps.

Instead, the reality is that it remains part of the EU’s Single Market. It is subject to EU laws – existing and new – over which it has no say. Its ultimate arbiter on these laws does not sit in Belfast or London, but in Luxembourg. No judges from Northern Ireland (nor from GB) are on the panel.

Its companies – and even companies in mainland UK servicing Northern Ireland – are subject to EU state aid rules. It no longer has free access to products from the rest of the UK. And if N.I. residents visit relatives in the UK with their dog or cat, they can’t even bring their pet back home with them without incurring large fees and conditions.

None of the above will change under the EU Commission’s latest proposals issued on Wednesday. This is not “getting Brexit done”. Not yet. Over to you, Lord Frost. A supposedly sovereign nation awaits.

[ Sources: EU Commission trade data ] Politicians and journalists can contact us for details, as ever.

Thanks to Brexit, the chances increase by the day for an NI & RoI re-unification. Who would want to have shortages daily when you could prosper? Scotland certainly feels the same way.

In a word EU protectionism! Yet again we see our trade destroyed by the EU! Whilst we wave their exports through unhindered! When will we learn and play the EU at its own game? Until we do they will continue to take advantage just as they are doing with higher energy prices . But only in Britain!

2. Brexit voters destroyed the trade with the EU, fact! We failed to prepare to check goods, the EU manages their checks just fine; we are simply incapable because somehow we thought this would never happen to us - listening to Tories will lead to such deterioration in capabilities & preparedness. When will Tory voters learn?
The ex-CEO of British Gas did say that leaving the EU would lead to difficulties in procuring energy; but sOvErEiGnTy & jerbs!!! We now have both, full sovereignty & so many jobs that the country has ground to a near-halt with unpicked fruit, empty shelves, the NHS has hardly any workers & the same for just about any industry, except politics. There is no shortage of politicians.
Now people are dismayed that a trade bloc that voters left is continuing trade seamlessly without us.

4 Adam Hiley I completely agree! 1 Brian, take it from a Scot living in Scotland, it isn't Scotland that feels the same way, it's the SNP who create grievance from whatever they can to push their agenda that doesn't agree. The SNP are NOT the people of Scotland! They just have the loudest voice at the moment, of which is slowly, steadily, but slowly changing! It can't come quickly enough, up here! The SNP are NOT Scotland! We are not the example to use to push your anti-UK propaganda. Please don't do it again. Cheers.

ANY price is worth paying for ELECTED ACCOUNTABLE leaders !!, why not go to the vile EU dictatorship if you don't like democracy or perhaps north Korea?

We do not have full sovereignty (3) Part of the United Kingdom is severed. Of course there's a huge increase of trade for the Republic with N I and we all know the reasons why. What we have is more EU oversight of the UK than you can shake a stick at what with joint committees, specialised committees, EU ambassador, a foreign court (one which is not exactly in several EU nations' good books presently ) - no arbitration dispute mechanism for us it seems, only for other nations more worthy - and all and sundry offering their valued opinions and threats. But we should not worry, 'Brussels' is in favour of a more structured dialogue with communities in Northern Ireland and supports allowing the region's political leaders to participate in a number of EU/UK Specialised Committees over & above the WA oversight body & Protocol consent mechanism. They propose to kind of allow us all sorts of other 'freedoms', not least to allow us to send various goodies and allow us to send medications to our fellow UK citizens within our own territory. Although it all sounds wonderful, the people of N I still face no say in any forthcoming new EU rules & regulation, state aid issues etc., & governance & constitutional issues remain. A new 'committee' also in the making following the TCA with little detail to be had presently from our own government but the EU Parliament recently voted overwhelmingly to send MEPs to this new UK/EU Parliamentary Assembly which will comprise 70 members - 35 EU / 35 UK to oversee and scrutinise the UK/EU trade relations and will have power to make formal recommendations to the UK Government & to the EU Commission.

7. in 2016, not a single person could say what they expected would happen to NI. Most shrugged & said if it came to it, NI would be a cost worth paying. Well here we are. It pays to look before leaping.

Exports from NI to the Rep of Ireland have increased by 77% so it's not all one way traffic as your piece seems to suggest.
Even Lord Frost had to begrudgingly admit at a side meeting during the Tory Conference that NI was prospering by being in the CU & SM.
GB chose to sever all links with the EU and insisted on 3rd Country status. It got what it asked for, along with all the Red Tape that goes along with 3rd Party trading with the EU.