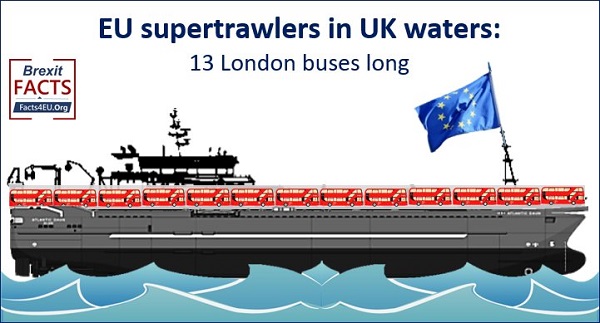 Out of the 1,700 licences the UK has issued to EU vessels to allow them to continue fishing in UK waters after Brexit, the largest of these is for a ship that is enormous.

The Annalies Elena carries the Polish flag, is Dutch-owned, and is 472 feet long (144m) with a gross tonnage of over 14,000 tonnes. Its length is the equivalent of 13 London Routemaster buses laid end-to-end. Permitted to fish in Brexit Britain’s waters, it has been prosecuted by EU member country Ireland and is unwelcome in certain other jurisdictions around the world.

The second-largest, the Margiris, carries the Lithuanian flag, is 469ft long (143m) and has a gross tonnage of 9,500 tonnes. Current maritime geo-positioning shows this ship to be in the North Sea as of the time of writing (4am, Tues 05 Oct 2021). 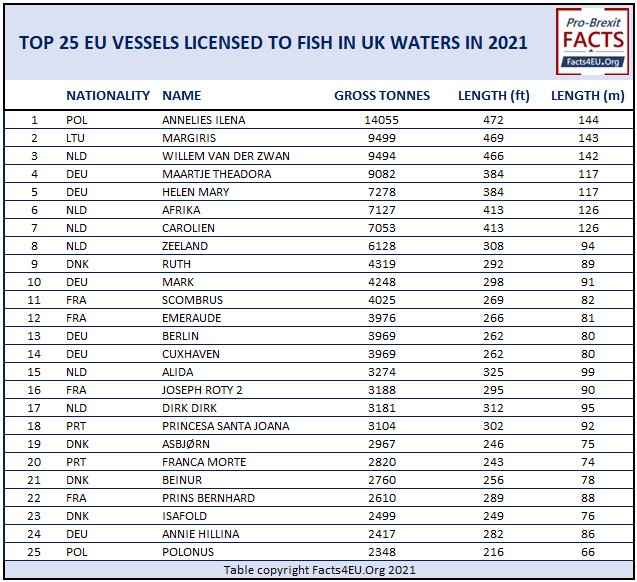 To give some perspective to what follows, smaller fishing boats are around 1-5 tonnes

The fourth-largest EU super-trawler licensed by British authorities this year is the Maartje Theadora, a German-registered vessel with over 9,000 tonnes gross weight. In 2012 it was prosecuted by the French (of all countries) and fined over £0.5 million for breaking EU law. It was stopped with £1m pounds’ worth of illegally-caught fish.

Here it is in the English Channel just three weeks ago.

Above: The Maartje Theadora in the English Channel, 12 Sep 2021, credit: Greenpeace

[IMPORTANT: Firstly we must stress that there is no suggestion that any of the ships mentioned have broken any UK laws. With UK fishing licences having been granted they are free to sail within the UK's 'Exclusive Economic Zone', which extends to 200 nautical miles from the coast.]

Out of almost 1,700 fishing licences which the UK has issued to EU boats, there are enormous factory ships or ‘super-trawlers’ which dominate fishing. For many years their fishing methods and the sheer scale of their activities have been causing immense concern to other fishermen and to marine conservationists.

Whilst the UK Government has talked about banning these EU ships, they were all granted licences this year to allow them to continue ploughing United Kingdom waters, including marine conservation areas from Scotland to the Isle of Wight. In today’s report Facts4EU.Org is providing some simple facts based on our detailed analysis of the latest licensing figures released by the Government’s Marine Management Organisation last week.

What are ‘factory ships’ or ‘super trawlers’?

There are no accepted official definitions for either of these terms. Descriptions, lengths, and tonnages vary according to the part of the world and the organisations writing about them.

Below is the Helen Mary, number five on our list above. The Helen Mary is a German-registered supertrawler some 117m long, fishing in the North Sea in October 2020, courtesy of Greenpeace.

In general terms we are talking about massive boats, many of which have full capabilities on board for the automated processing of the daily catches, as well as their chilling and freezing. These ships can stay at sea for up to two months at a time and can produce daily catches of over 300 tonnes per day. Their nets can be up to 1950 ft long by 650 ft wide (600m x 200m).

For the purposes of this article we initially decided to look at EU ships licensed by the UK authorities which have a gross weight in excess of that of a British Type 23 guided missile frigate (4,900 tonnes displacement), as this is quite a beast.

(Note: Military ships are generally described by their ‘displacement’, which is the way of calculating their total weight. Conversely, gross tonnage is used for commercial shipping and refers only to the storage capacity, not the entire weight of the ship and its contents, so our figures are very conservative.)

It then became clear that a wider picture was emerging, of more than half the EU fishing fleet’s total tonnage being accounted for by just 100 boats. That’s not even 6% of the total number of licences which the UK Government’s agency has issued to EU vessels to fish in British waters.

'Plenty more fish in the sea?'

The EU (and in particular France) is currently threatening the UK over a few licences being held up for very small French boats due to them not having the correct paperwork, despite them having been given extensions to provide it.

It must be said that the French and EU threats are wholly unreasonable, given the way that the post-Brexit UK has continued to allow the EU to take extraordinary quotas of UK fish, which for some species are more than 80%. In addition the UK has been more than generous in granting licences to the world’s largest supertrawlers, which carry the flags of EU countries, and which have been banned by countries such as Australia.

Our report above shows the industrial scale of fishing that has been pursued by some EU countries, in some cases with little care for the marine environment, according to conservationists. Meanwhile, the UK’s more localised fishing industry has been devastated by the EU’s Common Fisheries Policy for decades. This has not only meant UK fishermen from Scotland to Cornwall leaving the industry, it has also had a severe knock-on effect for the coastal communities which have traditionally relied on their fishing fleets to help to drive the local economies.

It remains a source of complete surprise to many people when they learn that the UK, an island nation surrounded by the richest seas in the world, is a net importer of fish from the EU, by a long margin.

It will take the UK fishing industry many years to recover from EU membership, but the time to start this is now. And a good start would be for the Government to move fast to ban super-trawlers from UK waters.

This is disgraceful...these super trawlers are raping our seas

I fear this govt - that only moves at glacial speed - will eventually get round to doing something long after it's too late, when the fish are gone and the oceans destroyed.
These factory ships and EU commercial interests have no reason to preserve the ocean and fish stocks because they know the clock is ticking and they can't count on access to our waters in perpetuity.

This Tory Government needs sorting out - and quickly. Traitors, and much, much worse.

The Mega trawlers should be fully banned, the environmental issues they cause is devastating, dolphins, seals washed up on UK beaches due to drowning or I juries, we have an order to protect these creatures in UK waters, We are not doing that are we, also I expected the EU to play their part in protecting the environment, disturbing
the sea beds where flush lay their eggs, soon there will be no creatures left in our waters... IT MUST STOP NOW

I do not know the full details of how the industry works in the UK, but I do know how the industry works in other countries.
I would assume the UK has quotas for how much fish of each species can be caught each year. That is, it is not a free for all. If my assumption is correct then it will be the owners of the quota who are probably contracting these vessels to catch their quota for them OR the quota owners lease out their quota to the operators of the vessels and they do what they like with the catch. Because of the way the UK fishing fleet was decimated over the past few decades, there possibly is not the UK owned catching capacity around to catch the fish.