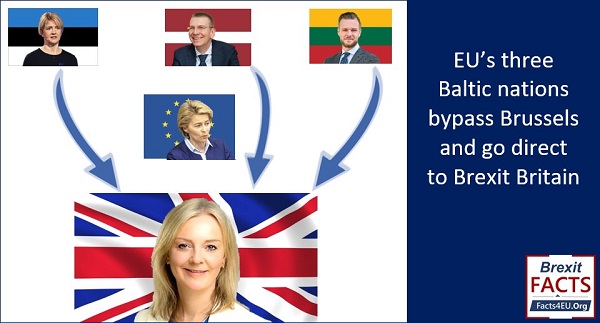 Remember when the EU Commission forbade all contact between EU member countries and Brexit Britain? All that has now changed, with EU national governments now cutting out Brussels and visiting Britain to hold direct, high-level talks with the UK Government.

Yesterday (11 Oct 2021) the Foreign Secretary Liz Truss hosted the foreign ministers of three member countries of the EU at her country residence, Chevening House, in Kent. The result was a joint communiqué covering closer economic ties, defence, democracy, human rights, and the “malign actors” of Russia and China.

“Pleased to welcome our three Baltic partners to the UK. The United Kingdom supported their independence in 1991. 30 years on, we stand with them once again to advance freedom and democracy. I look forward to discussing how we boost economic and security ties to face down malign actors.”

Lithuania, Latvia and Estonia have more in common on foreign policy with UK than with EU

It seems that the EU’s three Baltic countries have more in common with the United Kingdom than with Brussels and some of the other EU countries. In what was clearly a very friendly day at the UK Foreign Secretary’s country residence, Chevening House in Kent, Liz Truss and the three Baltic foreign ministers had a meeting of minds on all the topics they discussed.

The UK and the three EU Baltic nations - joint communiqué

This year marks the 30th year since the end of the Soviet occupation of the Baltic States, and the re-establishment of diplomatic relations with the United Kingdom. The UK, along with its powerful ally the United States, played a key role in the fall of the Soviet Union and was a major supporter of independence for Lithuania, Latvia, and Estonia.

Why are the EU’s Baltic nations closer to the UK than to the EU on all this?

All three EU Baltic states border Russia. The aggressive military manoeuvres of Putin’s military on their borders, following his annexation of part of the sovereign territory of the Ukraine, have resulted in the need for a NATO show of force in the region. This NATO (not ‘EU Army’) military presence is led by the United Kingdom.

Below is a map we created showing the location of Lithuania, Latvia and Estonia in relation to the UK. And the small red area between Lithuania and Poland is not a mistake. This really is Russian territory within the overall borders of the EU - something which is never mentioned by Brussels. 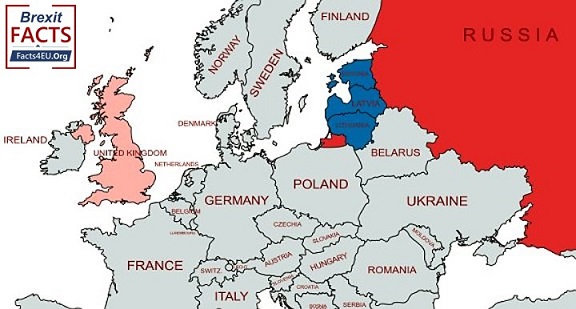 The EU hierarchy has a problem with being too firm on Russia, as Germany is working hard to ensure its latest ‘Nordstream II’ gas pipeline from Russia gets approval. This runs against the threats which the Baltic states are facing on a daily basis.

When it comes to China, the other major threat to the West, the Baltic states are united in condemning the genocide and human rights abuses taking place there. In contrast, the EU Commission just agreed a major deal with the Chinese government, even though this is currently held up by the EU Parliament.

On 22 Jan 2021 the EU Commission published its ‘EU-China Comprehensive Agreement on Investment’ (CAI), agreed with the PRC government in Beijing. Once again official EU policy seems to be at odds with that of the Baltic countries.

It is a sad fact that a defeatist, ‘Little Britain’ mentality still pervades the Establishment in the United Kingdom. It doesn’t seem to matter how many global trade deals were signed by Liz Truss when she was International Trade Secretary, nor how many global alliances are being forged, such as the new AUKUS alliance between the UK, Australia and the United States, the Establishment narrative seems to be unwavering.

“We are too small and unimportant to survive on our own,” was the constant refrain prior to and after the EU Referendum. So invested are the UK Establishment in this thinking that they seem to find it impossible to celebrate the fact that they were wrong.

Yesterday’s event at the Foreign Secretary’s country residence demonstrates yet again that the United Kingdom is an important player on the world stage. The three Baltic states might be small economically, but strategically they are very significant indeed.

For their three foreign ministers to bypass Brussels, come straight to the UK, and then deliver a joint communiqué that could hardly be more positive across a very wide range of subjects – this is another big ‘tick in the box’ for the newly-independent Global Britain.

No matter how many issues are being faced at home (most of these in common with EU countries and others around the world), the reputation of Global Britain is being enhanced on a regular basis. And that’s something to cheer us all up.

[ Sources: UK Foreign, Commonwealth & Development Office | EU Parliament | EU Commission ] Politicians and journalists can contact us for details, as ever.

Independent Sovereign nations are serving notice to the failed dictatorship.

The EU is a trade bloc, it has no army. If it had an army you'd be sure to tell everyone how bad that is. Those 3 nations needs friends with weapons against Russia & China.
We sell arms to the Saudis, so I'm sure we can sell to the Baltic states too. Walking alone in the world might actually help the UK grow up to the realities that supersede childish populism & culture wars it has grown accustomed to in the last few years.

Nato was never to creep closer, that was the deal. Naughty naughty. Apparently the list is short of whom would be happy with the French defending them when they cannot defend themselves.

4. The US, at Trump's insistence, left the ME in a hurry. NATO knows it can't do any more than it does in the buffer states without awaking the sleeping bear.
The only logical step then, would be to talk to the UK.
The tactical perception is that Russia condones the UK as a grown bear would a roaring cub. There are still unanswered questions about oligarchs washing money in the UK, interfering in the Brexit vote & the 2019 election. Questions that the PM could easily answer but prefers not to discuss & considers the matter closed, even if the intelligence committee may not entirely agree.
This is a soft but brilliant tactical move on the part of the Eastern bloc that will have little or no military implications for all parties involved. This is a win on their part, they've gotten something for nothing. Committing too many resources in the pacific with AUKUS would leave the east exposed as America has gone AWOL. These buffer states knew that, they're playing the grand game of chess.
Welcome to geopolitics 101, if you've been primarily concerned with voting in scarcity in the hope that we'd have cheaper goods & better outcomes.

That’s the way to do it, Well Done Liz.

Tony I wish you'd just do one