EXCLUSIVE: If you wanted an EU job this century, the UK was the place to come 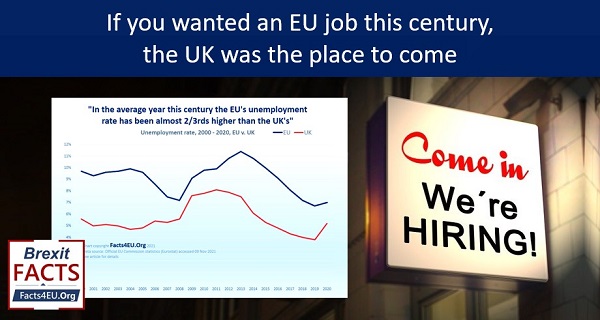 Is it any wonder so many millions came from the EU27 to make their lives in the United Kingdom?

In an average year since the start of this century, the EU's unemployment rate has been an average of 2/3rds higher than the UK's in any given year, according to official EU figures researched by the Facts4EU.Org think tank and published today.

For every single year this century, unemployment in the EU has been higher in the EU than in the UK – and in some years it has been double the UK rate. These are comparable figures between the UK and the EU, contained in the EU’s own official statistics database.

In the average year this century, EU unemployment was 65.4% higher than the UK's 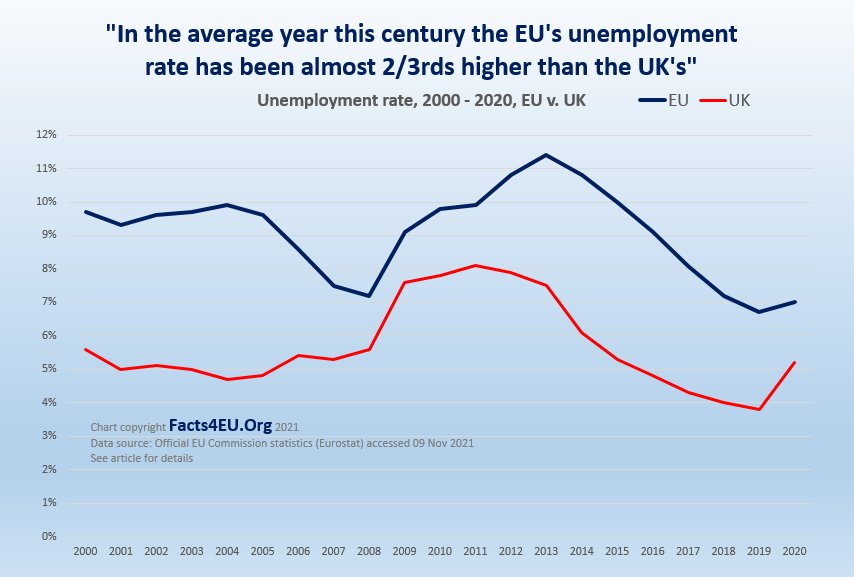 [Source data: Official EU Commission statistics from Eurostat. Note: The 2020 figure for the UK comes from the UK Office for National Statistics.]

In the EU Referendum year of 2016, the unemployment rate was 90% higher in the EU compared to the United Kingdom.

The UK’s extraordinary record of consistently lower unemployment compared to the EU was achieved despite the UK receiving a large number of EU migrants during this period and providing jobs for millions of them.

The latest UK Home Office figures show that over 5.5 million (5,548,440) EU citizens have applied for permanent settlement in the UK since last year when the scheme became operational. Without this, the EU’s unemployment rate in recent years would have been even higher than it already was and is.

This figure of 5.5 million does not of course include the millions of EU citizens who came to the UK for jobs from 2000-2019, worked for some time, and who left before the Settlement Scheme started in 2020. In other words, the UK has effectively been mopping up part of the EU’s unemployment for decades. (See ‘Observations’ for our commentary on this.)

The worst 10 EU countries in which to be unemployed

The EU hasn’t solved unemployment in the last 20 years and is still way behind the UK. In some countries the problem continues to be severe. In particular, Greece, Spain, and the EU’s third-largest economy Italy all continue to suffer. President Macron's France also has much higher unemployment than the UK.

The worst 10 EU countries for unemployment in 2020 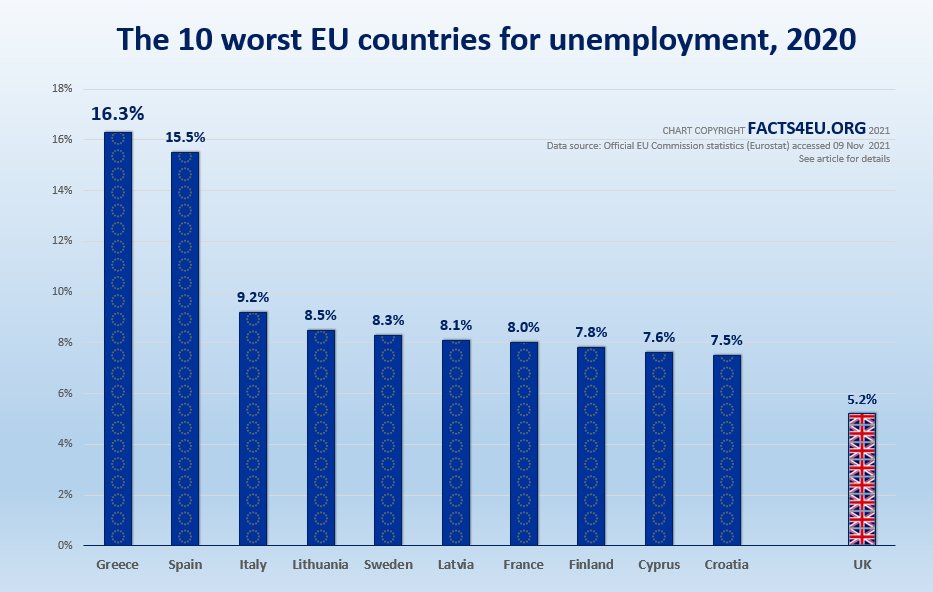 The effect on the United Kingdom of millions of EU migrants

The issue of the EU’s infamous ‘Freedom of Movement’ edict was an important reason amongst the many reasons why the majority of British people voted to leave the EU back in 2016. To this day there are Remain campaigners both inside and outside of Parliament who wish to continue Free Movement in some form.

To those EU citizens who already decided to make their homes in the United Kingdom, readers naturally wish to make them feel welcome. They arrived perfectly legally. That said, this should not prevent any discussion of the effects of such a dramatic population shift from the EU to the UK.

The UK absorbed over 5 million EU migrants – but at what cost?

Below are just some of the consequences of the EU’s policy of Free Movement, which allowed millions of EU citizens to enter the UK in recent years. These are all issues which have been raised by readers in correspondence with us over time, and the list is not exhaustive.

One of the problems has been that when anyone tried to complain about any of the above, a common criticism was to describe them as in some way racist. The reality is that people have merely been pointing out what was simple common sense. Had more in the Westminster bubble actually left it and spent time in the rest of the UK, they might perhaps have been less surprised when the majority of the electorate voted Leave.

Of course, the Facts4EU.Org team are just uneducated and unintelligent, so what do we know....?

Do you want Facts4EU.Org to continue?

[ Sources: EU Commission | UK Office for National Statistics ] Politicians and journalists can contact us for details, as ever.

I really enjoy reading this website. Today's article is bang on, 5 million nearly 1/10th of our population increase - no country can possibly increase infrastructure or housing to cope in such a short period of time.

EU workers were not just the Poles you like to pick on & call names - it included many skilled engineers, doctors, financial workers, programmers - now you'll have non-EU migration instead.

Lolly, not sure why you are mentioning Poles. Who is picking on them and calling them names? Most of us know Polish people who are very hard-working, and courteous. And don't forget the significant contribution of Polish airmen in the Battle of Britain.

What about the many immigrants who came here with no intention of working.
You can arrive, claim domacil and be looked after at great expense to tax payers.
There are millions in the UK both immigrants and domestic who can work but choose not to.
What sort of country allows that and allows it to continue.

5. Oh yes, the (in)famous yet also elusive Schrodinger's immigrant - who is simultaneously stealing your jobs yet also does not want to work. Odd.
You can't even decide how to berate them, just so long as you are. Give it a rest.