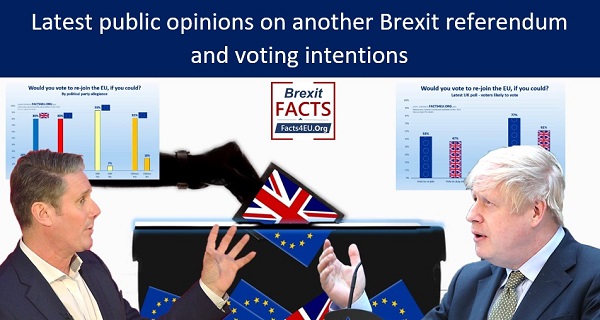 In a major poll carried out by Savanta ComRes of more than 2,200 adults in the United Kingdom and published on Friday 12 November, a stunning 53% say they would now vote to re-join the EU – a 6% lead.

This is a significant survey by a serious polling organisation and the results cannot be dismissed lightly. Below Facts4EU.Org summarises the key results and then comments on these in our 'Observations' below.

On this day, Remembrance Sunday when we remember all those who sacrificed their lives or their well-being in the cause of freedom, Facts4EU.Org felt it important to look at public attitudes honestly.

Latest public opinions on another Brexit referendum and voting intentions

Would you vote to re-join the EU, if you could? 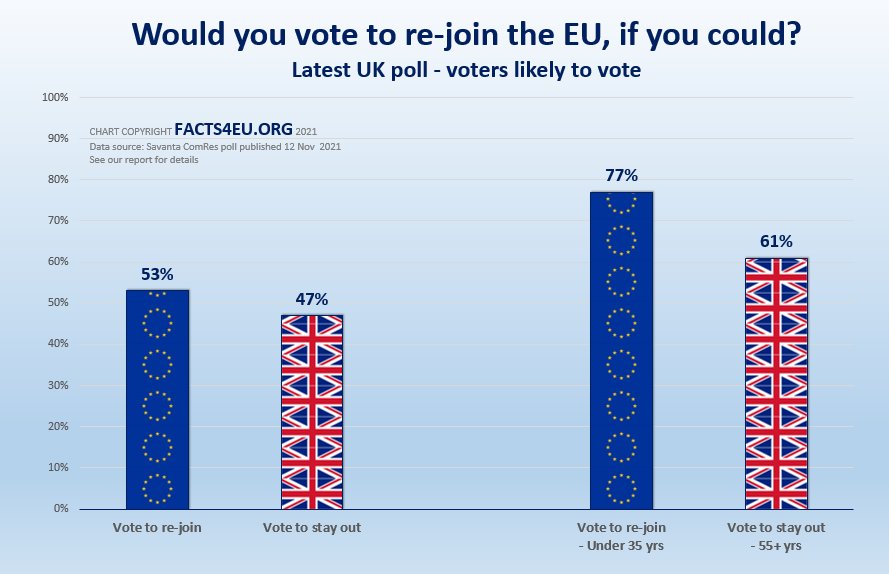 Want another referendum within the next five years? 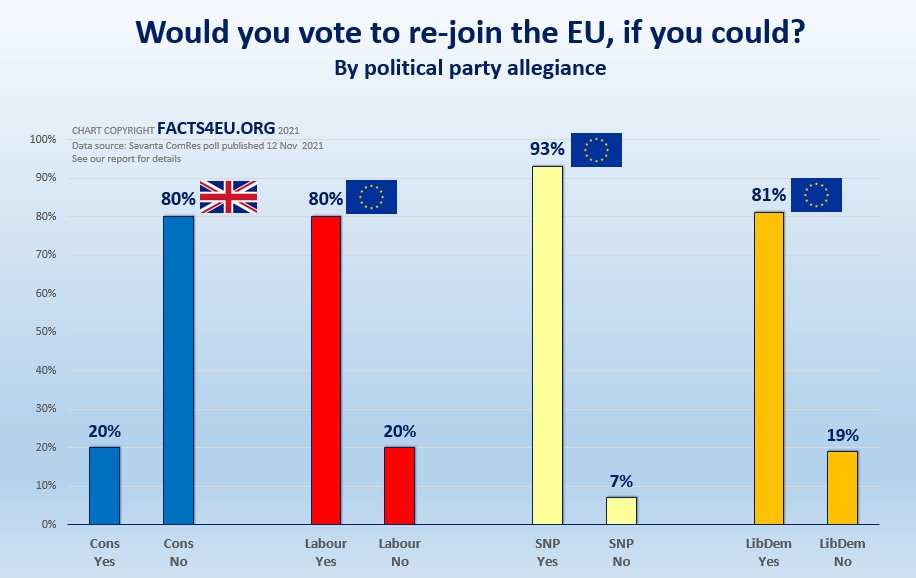 The above all comes from the poll conducted by Savanta ComRes and published on Thur 11 Nov 2021. Savanta ComRes interviewed 2,231 UK adults between 5-7 November 2021. Data were weighted by age, sex, region and SEG, as well as by the results of the 2016 EU Referendum and 2019 General Election.

Polls are only polls, but...

Polls are only polls. No-one knows this better than Leave voters after the polling ahead of the 2016 Referendum, when every poll bar one was proved wrong.

That said, the UK has now experienced more than five years of vindictive and aggressive behaviour by the EU towards the UK. It has seen the UK lead the world in vaccines, whereas it is claimed that many thousands died in the EU as a result of its vaccination programme being handled by the EU Commission in typically slow and incompetent fashion for months.

The UK has also seen almost every prediction in the Project Fear arsenal being proved not only wrong, but wrong in entirely the opposite direction. Project Fear was rapidly proven to be ‘Project Farce’.

For example, job numbers actually increased by 679,000 in the two years after we voted to leave, rather than plummeting by 500,000-820,000 as George Osborne and HM Treasury predicted. Contrary to the subsequent ‘clutching at straws’ by Remainers, 96.4% of these were extra full-time, permanent jobs.

Five years on, the cities of Paris and Frankfurt are still waiting in vain for the mass influx of City staff following the supposed immediate implosion of the UK’s important financial sector. And last week the EU Commission was forced to announce that it is extending the City of London’s vital role in euro clearing indefinitely.

Sometimes it's good to look back, but maybe not for Re-Joiners

Here's a blast from the past. On Christmas Eve, 24 Dec 2018 - fully two-and-a-half years after the British electorate voted to leave the EU - Facts4EU.Org published a Christmas message of good cheer involving jobs, wages and the economy. We had analysed the latest data released by the Office for National Statistics and reported as follows.

Since the EU Referendum...

[Researched and published by Facts4EU.Org
on Christmas Eve 2018
from official data from the UK Office of National Statistics.]

So the majority of Brexit news has been good, why haven’t voters cottoned on? Or if they are aware, why have only 11% of Remain voters changed their minds, offset by 10% of Leave voters who would now apparently vote to re-join the EU?

The Facts4EU.Org team has its own theories, but we are interested in what readers think. Please let us know in the Comments section below, or email us here. We will then publish the best of these in a further article, together with our own analysis.

We will leave readers with a sobering thought. If ever there were another Referendum, and if this time the Re-join camp were able to persuade its younger supporters actually to go out and vote, Re-join would win hands down.

Yes, polls are polls, but we suggest that this is a problem which needs to be addressed. It entirely vindicates our decision to carry on working seven days a week from 24 June 2016 onwards and also vindicates the decision of many readers to continue supporting our work with donations. And on that subject please read what follows. Thank you.

We badly need more readers to contribute if they can. Many thousands read our work. Tens of thousands more see it on social media. And our reports make the national press on average twice a week. Please add to the 1% of our readership that donates, so we can bring you the latest report tomorrow, as well as other very important reports we have in the pipeline. Thank you!

Please note: We are a 'not for profit' team (we make a loss) and any donation goes towards the actual work, not plush London offices, lunch or taxi expenses, or other luxuries of some organisations such as the EU Commission's limos and gilt-edged pensions. Donation links are below. We only name donors if they give their specific approval, otherwise donations are anonymous.

[ Sources: Savanta ComRes | HM Treasury | Office for National Statistics ] Politicians and journalists can contact us for details, as ever.

You can see the media is double negative about everything.. there is a plan to try by any means to get rid of boris.. so they can ease us back in the EU..

BBC propaganda getting through?

So the complete dismissal of the democratic vote rolls on unabashed.
So they have forgotten, and today of all days our elite forces are being deployed into the eu's second colony, following orders by the great deceiver in the White House. This is a war you do not want or need and will swallow generations, the time is now or never and sadly it will be never as they have had their way with our community and history, not enough will stand.
Our government has led an agenda against us since Thatcher, divided and derided. The greatness of Britain has always been its people, we are the greatness, though we suffer too many fools who proclaim eliteness.

Before the referendum, polls showed we would vote to remain within the EU. Look what nonsense that was.

And just like the Americans embarrassing withdrawal from Afghan, I have to summise there is a good chance that our elite forces are going to be used to subdue the nation. Be careful to all boots on the ground.
I hope I am wrong

Give me a good reason for rejoining the E.U.

The British BS Corporation and others spreading the lies 8nstead of the truth along with Sky and others. Many people still watch the BBC thinking it is unbiased bit it is leaning heavily to the woke left. Not just on Brexit but grooming gangs, immigration, Labour sleaze and so much more

Yeah I wouldn't trust that poll at all.
Remainer/rejoiner drivel.
Main stream media is completely against our Eu exit and they are all scorned.
The country is not receiving the positive news we deserve.
Even the government is half cocked in their conviction over Brexit.
It's tragic how many entities are still actively conspiring against the UK.