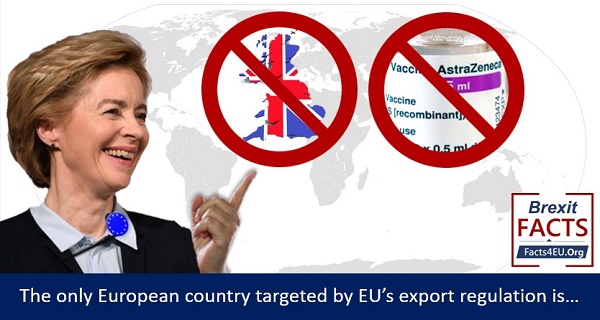 Facts4EU.Org reveals the politics behind the EU’s actions against the United Kingdom

On 29 January 2021 the EU Commission used emergency powers, without consulting any EU member country, to issue its Implementing Regulation (EU) 2021/111 controlling the export of vaccines.

“Due to the urgency of the situation, justified by the lack of transparency in a time where the production and delivery of vaccines is still in the building-up phase and the ensuing temporary global shortage, the measure was adopted by the Commission using the emergency procedure.

“This allows the Commission to act fast before the Member States are formally consulted.”

In doing so it invoked Article 16 of the Withdrawal Agreement and put a hard border between Northern Ireland and the Republic of Ireland, causing huge damage to the fragile peace balance there. Hours later the EU Commission was forced to climb down after furious reactions from Dublin and London, but the Implementing Regulation remained in place.

The embattled Commission President Ursula von der Leyen gave an interview to German media on Saturday in which she made it clear that the Commission is ready to ban exports of vaccines to the UK, despite them being subject to a legal contract between the UK Government and AstraZeneca.

REVEALED: How the EU now only seems to want to target one country – the United Kingdom

This week the EU Commission seems to have only one country in its sights - the country which voted in 2016 to leave its club. The EU's latest moves appear to be directed solely at the United Kingdom.

Today Facts4EU.Org can reveal the full list of 118 states which were specifically excluded from the EU’s export regulation in January, and how the EU Commission is only targeting the United Kingdom and its Commonwealth partner Australia for punishment out of all the countries in the world.

Switzerland, Norway, India, Iceland, and neighbouring countries are exempt from the EU’s ban

When the EU Commission took its peremptory action on 29 January this year, one country was missing from the list of neighbouring countries which were excluded from the EU’s export ban: the United Kingdom. And as things stand, the only two countries in the world to which the EU will ban exports of vaccines are.... Brexit Britain, and our Commonwealth cousins, Australia.

On Thursday this week the EU Council meets virtually. Now it seems that at this virtual meeting the Commission is expecting the leaders of the EU member countries to endorse its ban on vaccine exports to the UK.

In our next report on this subject we will reveal how the EU Commission’s proposed export ban also applies to the ingredients which are needed to make its own vaccines. And some of the essential ingredients for the EU's vaccines are produced in - and exported to the EU from - Brexit Britain.

The brazen nature of the hostility towards the United Kingdom by those running the EU in Brussels is now being demonstrated for all the world to see. The behaviour of certain EU apparatchiks is now getting to the point where we feel sure that several leaders of EU countries are starting to consider the future of Frau von der Leyen’s leadership of the EU Commission and indeed the future of some of its members, such as the Health Commissioner.

The UK has now given vaccine doses to more than 50% of its adult population. This compares with the EU, where less than 12% have received a dose. As each week goes by, the clear superiority of the British vaccination programme becomes ever starker, and the performance of the EU Commission becomes ever more exposed.

In our next report Facts4EU.Org will reveal how the EU Commission is in danger of making yet another catastrophic error. And this upcoming report involves a great success story for Brexit Britain. We hope to publish this very soon.

[ Sources: EU Commission | EU law library (EU-Lex) | WHO COVAX Vaccine Alliance (run by GAVI) ] Politicians and journalists can contact us for details, as ever.

Remainers are an insufferable bunch. They've gone from "there'll be medicine shortages due to brexit" to "this is vaccine nationalism", without any awareness of their mental gymnastics and contradictory views

It always makes me laugh when Ministers spout the words 'our friends in Europe'. Since when?

They are so angry at our success. However, the whole wide world is watching their disgusting behaviour.

And here it is, "peace in our time" or something more in keeping with the very survival of our nation. Lol skidmarks everywhere..

I'm curious to see how this plays out. For example, it was the UK government, not the French (or indeed, the EU Commission) that supported the French company Valneva with an early order for 60 million doses followed shortly after by a further 40 million. A very promising but still little-known (in the greater scheme of things) development, this is a European vaccine that would not even have been possible without British support, plain and simple. Their own government and the EU didn't want to know - they were too busy arguing cost with the bigger vaccine manufacturers, as if they had all the time in the world to do so.
Luckily for us, Valneva have a manufacturing plant in Scotland. It'll be interesting to see if the EU can legally force Valneva to ship from Scotland to the EU in future, since doing so would break their contractual agreements with the UK / their main funder until 100 million doses have been delivered. Doubtless just one of many future battles to be waged, given the EU's current belligerent stance on things.

Very well researched and reported thank you for the useful info , will watch closely to see if the thieves try to steal OUR vaccines . Hope the Scottish fishwife doesn't offer to sell them first .

In my opinion, It's reasonable to suggest the EU commission under its extremely arrogant and unaccountable leader, Ursula Von der Leyen, together with leaders of some - not all - its members, have made themselves hostile to the United Kingdom.
The UK can take the moral high-ground, and be satisfied that all the EU commission appears to do is threaten its neighbours when it doesn't get its own way. Certainly, they don't exhibit 'good neighbourliness' - which is mainly due to VDL, whom as usual tries to divert attention away from her own failures.
The world watches on in disbelief at VDL's total incompetence over a global issue.
It was NOT the UK's fault the EU were months late in ordering vaccine.
It was NOT the UK's fault the EU was sitting on millions of unused doses.
It was NOT the UK's fault the commission stopped some of its members in their tracks from ordering vaccine?
As we know, VDL scraped through with a minimum NINE VOTES required to her position - (she was the only nominee who MEPs had to vote for, or not, in a SECRET ballot).
I'm pleased several elected leaders of EU member countries are ignoring the commission re vaccines - rightly in my opinion - for they have a duty to protect citizens of their home country, first and foremost. They cannot 'surrender' their elected duty to VDL.
IT'S CLEAR IN MY MIND, THE COMMISSION IS DISCRIMINATING AGAINST THE UNITED KINGDOM?
If the EU want friendly relations with the UK, I suggest they remove the entire commission - it's been done before.

According to the leaflet I was given, my "Oxford" AZ vaccine dose was manufactured in Speke, Liverpool.

Croda International, a company quoted on the London Stock Exchange (FTSE:CRDA) supplies an excipient, a vital ingredient in drug manufacture, to the plant in Belgium that produces the Pfizer BioNTech vaccine.
Bluntly, the Belgian plant would not be able to continue without Croda's excipient.
Yet have we in the UK threatened to place an embargo on supplies? Of course we haven't; to do so would have made us no better than the EU.
-
New Zealand is missing from the EU's list too. What a coincidence!

What a very silly article.
Yes, it is private companies which export vaccines. But, also yes, they need government approval to do so. The U.K., for example, currently bans the export of almost 200 medicines.
This whole saga is nothing to do with Brexit. The EU moved on from Brexit 5 years ago. The only ones who care about Brexit are the Brexitists who are desperate to find anything they can to try to justify their failed project.
The UK has an order with AstraZeneca. The EU has a bigger order with AstraZeneca. When AstraZeneca failed to produce enough vaccines to fulfil both orders the U.K. received its order in full, the EU suffered all of the shortfall. Brexitists say ‘ah but the U.K. funded research’ - well so did the EU.
No vaccines have been exported from the U.K. to the EU. Tens of millions have gone the other way. It is entirely appropriate now for the EU to block shipments to the U.K. It needs them more than we do.
The fact is that this situation would never have arisen if we were not led by nasty, spiteful little Englanders. What an absolute embarrassment you all are to our country.