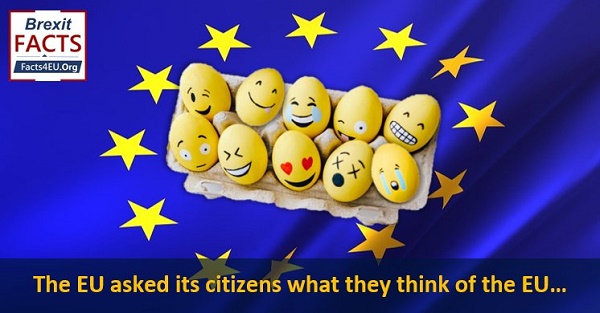 Every year the EU Commission conducts a survey of its citizens, asking a long series of questions to determine their views on a wide range of topics. And every year Facts4EU.Org delves into the detail and produces a report which brings some of the more interesting facts to light.

The latest ‘Eurobarometer’ survey report and data tables were published on Tuesday. Some of the results do not make for pretty reading for the glassy tower dwellers of Brussels.

It gets worse. This survey was conducted in October and November last year, before the continuing disaster of the EU Commission’s Covid vaccines programme had even been revealed, so it can be expected that the results would be far worse if conducted today. 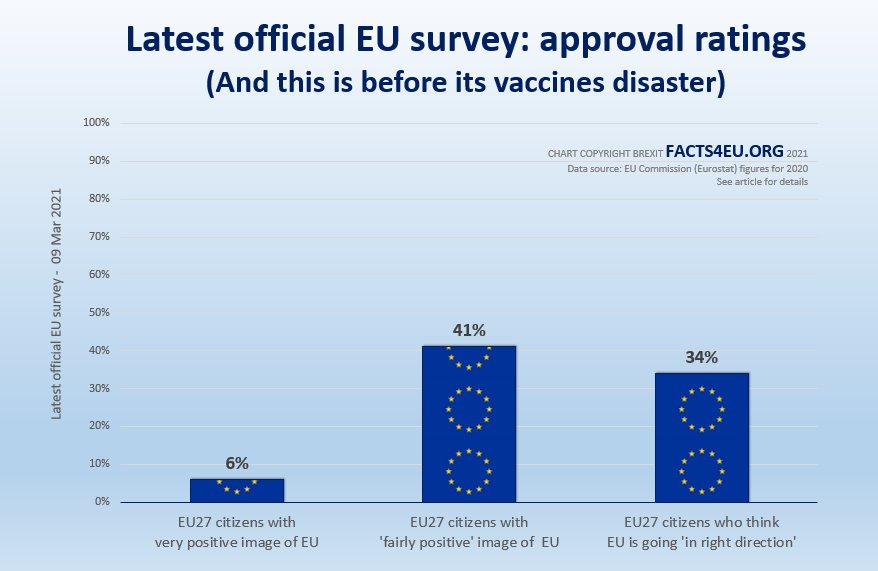 And on the EU's handling of the Covid crisis:

How the EU Commission chose to spin this

Each year when these surveys are conducted, the EU Commission takes its time to present the results in as good a light as possible in a press release and a report. This year for the first time the Eurobarometer was conducted jointly with the EU Parliament and the Commission chose to headline on this, and on the survey questions regarding the launch of the Conference on the Future of Europe.

The headline in the Commission’s press release was “EU-wide survey shows Europeans support the launch of the Conference on the Future of Europe”. Perhaps this was inevitable, as some of the results in this latest survey will not make for comfortable reading in the Berlaymont building in Brussels. 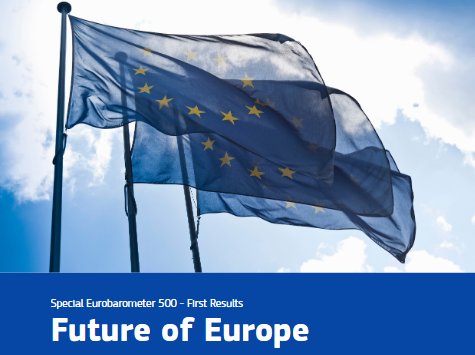 What do EU27 citizens care about most? Immigration and terrorism

As part of the survey, people were asked to name their major concerns. The top two topics on people’s minds were migration (43%) and terrorism (39%). The Commission’s grand plan for a ‘Conference on the Future of Europe’ did not figure.

This is despite the fact that a staggering 89% said that “There is still work to be done to strengthen democracy in the EU.” Perhaps the idea of another EU talking shop did not seem to ordinary people that it would be likely to strengthen the bedrock of democracy, which should underpin any bloc with aspirations to become a superstate.

“Migration and terrorism…? Let’s not mention those”

Migration and terrorism are not topics the EU Commission likes to talk about very much as they are not exactly areas in which the EU has exhibited competence. Nor is migration a topic on which the ordinary citizens of the EU are likely to agree with the ‘open borders’ ideologues inhabiting the EU’s many thousands of offices in Brussels. Nevertheless, these are the two topics at the top of ordinary people’s minds.

The third most important topic concerning people was “Handling global health issues”. Given that since the survey was conducted last October and November the EU has made a complete mess of its vaccination programme and lags far behind the UK, the USA and other countries, we suspect that this issue might now be higher up in the priorities of EU citizens.

Not looking good for the EU

This survey must make grim reading in Brussels. As usual they have done their best to bury the worst aspects, but we are pleased to bring some of these out in our customary analysis of the EU’s report.

As ever we must place our usual caveats on the Eurobarometer’s readings. Each year we stress that we believe the results to be highly suspect, in favour of the EU. This survey is always absurdly long and complicated and none of the Facts4EU.Org team would have the time to complete it. We suspect that those doing so are more likely to be interested in the EU and in favour of it. In this latest case the survey runs to 92 questions, with up to six possible answers per question. It would take at least an hour and a half to complete.

The other concern is always in regard to the actual questions being asked. To say that some of these questions are ‘leading’ would be an understatement. For example: “How would you like to contribute to the activities of the Conference on the Future of Europe?” Firstly we suspect most people would have zero interest in this conference and secondly the question suggests to the respondent that he or she should at least have some interest.

Are there still Rejoiners left in the UK?

Yes, according to the latest polls, there are, although they have diminished greatly in number. Whilst we are now focusing more and more on the opportunities for Brexit Britain, it is important to highlight the situation across the Channel.

If for no other reason, it reassures the British public that the right decision was to leave that sclerotic organisation. It also bolsters the more robust negotiating attitude towards the EU which is now seemingly being taken by the British government.

[ Sources: EU Commission | EU Parliament ] Politicians and journalists can contact us for details, as ever.

First take the beam out of your own eye, and then you will see clearly to remove the speck from your brother's eye.
That is not my quote, it's from a book you may have read - or evidently not.
It would be interesting to see what a nationwide poll here would say.
We kinda know what the Welsh & Scots think.

Orion, you're preaching water and drinking wine... 😂
Can you see the irony? Evidently not.

I find the most devastating (for the EU) fact to be that about two thirds of their own citizens do not believe the EU is going in the right direction. Any national government suffering such a significant lack of support would be extremely unlikely to survive their next elections. Those wheels are looking increasingly wobbly, as the EU is clearly struggling to justify its own existence to the very people it is supposed to be representing.

Migration is a matter for individual EU member states. If someone wants to migrate to, say, Finland - they apply to Finland under Finland’s migration policies. If they are granted the right to live and work in Finland they do NOT become an EU citizen and they do not gain the right to free movement. The same applies in all EU countries. It was always very much a leave lie that the did.
Terrorism, again, is a matter for individual EU members. Despite the fact that few have any problems at all with terrorism - and, those that do, far right terrorism is the most dangerous.
The reality is that support for the EU is growing. Brexit has strengthened that support - not weakened it - as Europeans see the absolute mess the British quittlings have made of it all.
As for vaccines, EU countries started a few weeks after the UK. They had less need to rush and take risks as their death tolls were all lower. We are now over our latest wave - thanks to lockdown, not to vaccines - some European countries are still in the midst of theirs. But their vaccines will be delivered in time to prevent the next wave. Delays with supplies from unreliable British company AstraZeneca have not helped. The EU has also allowed its vaccines to be exported - unlike the UK which has hoarded all of those produced here. EU countries have carried out twice as many vaccinations as the UK has - and they are doing around three quarters of a million doses more than us everyday. They also are likely to have the single dose J&J coming on stream soon too. It is still likely that a number of EU countries will complete their vaccination programmes before we finish ours. And theirs will have cost them less too. All while having fewer dead and less economic damage. Brexit Britain is an epic failure. What an embarrassment you have made us.

The unrelenting onslaught of English bashing is nothing more than to be expected. After reading some posts you would question your own reality of whether or not it was real that we invented the modern world and almost everything in it. With also belonging to the back to back world war champion team, (with some sterling indiviual efforts). The educated understand our gifts to civilization, the others just want more

No surprises there then. I'd say the 6% who viewed it positively worked in EU headquarters!

Buster 6.
Firstly this is an article about how people view the EU.Your good at just spouting what you want when you want.
Most of what you say in your comment piece is rubbish and the reality is the opposite.
It does not relinquish the Eu of blame for being behind the UK by a few weeks over vaccine procurement.
The question is why were they behind. If they were so great they should have been in front by a few months.
Britain is way ahead with vaccine delivery standing at 23 and a half million doses.
Its sad and a pity that you seem British yet you are so anti British.
I certainly wouldn't want you beside me in a battle.

some readers still cannot come to terms with the fact that the EU is run by unelected unaccountable 'people' immune from prosecution for most things, it is just like 1930's germany again !!, the remainers don't want to be labelled as brown shirts which of course they have unwittingly become !!