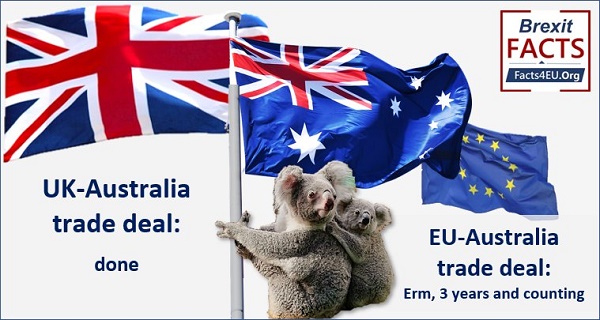 Brexit put a bomb under the EU, but still they can’t do a simple trade deal with a country like Australia

Being an open and outward-looking country (like Brexit Britain), Australia has wanted to do a trade deal with the EU for decades. In theory there was nothing preventing this except the EU Commission’s apparent lack of interest in trade. We found an early 'EU framework agreement' being negotiated with Australia from 1995, which then stalled, and this has been the story ever since.

Under EU diktat, Australia could only do a trade deal with the UK once the UK had left the EU which happened on 01 Jan this year. As Facts4EU.Org reported way back in late 2016, the EU Commission specifically forbade the UK Government from having trade talks with other countries such as Australia until it formally left. This was not contained in any EU laws or treaties, it was a diktat from the Commission.

The UK-Aus deal is now agreed in principle, announced by UK Prime Minister Johnson and Australian Prime Minister Morrison in London on Tuesday 15 June 2021 after less than six months of detailed talks. Facts4EU.Org will report further on this when the official papers have been published.

Meanwhile the EU-Aus trade deal lumbers on. According to the EU Commission’s Trade Directorate the latest iteration of the EU's talks with Australia reached Round 10 in March, after re-starting on 18 June 2018 – almost exactly three years ago.

Judging from the summary documents of the last round which Facts4EU.Org has studied, there is still a long way to go before any agreement in principle will be reached. Round 11 is due to start in the coming two weeks.

How Brexit put a bomb under the EU

For years the Commission seemed to have little interest – and certainly no sense of urgency - in its trade talks with other countries. This all changed after the UK’s EU Referendum result, when the EU suddenly started scrabbling around for any trade deal it could find.

The Commission’s new and sudden enthusiasm for trade did not start well, however. Some months after the Leave vote, the EU’s talks with the US broke down completely and the US withdrew. And this was while the USA was still under the Europhile presidency of Barack “UK will be at the back of the queue” Obama.

The EU’s attention then turned to Canada – a popular choice for the French. Talks had started in 2004 in Ottowa and a deal of sorts was finally done in September 2017, called ‘CETA’. It remains unratified to this day, 17 years after the talks began. As the Commission itself says:

“National parliaments in EU countries – and in some cases regional ones too – will then need to approve CETA before it can take full effect.”

Taking into account upper and lower chambers, and regional parliaments, we believe that over 35 approvals across the EU27 countries will be required before this trade deal is fully ratified.

Facts4EU.Org asked a man who spent 10 years as an MEP on the EU's International Trade Committee for his perspective. Here is what David Campbell Bannerman, now a respected international trade consultant, told Facts4EU.Org exclusively:-

“I can testify first-hand how slow the EU is at negotiating trade deals having overseen them directly as an MEP. On Australia and New Zealand: The EU’s extraordinary demand to interfere in human rights and other political areas in related deals drove both counties away, quite rightly.

“Canada’s CETA deal nearly collapsed over the EU seeking to determine how long Canadians could be kept in prison without trial. This is the EU using trade to leverage political control and it isn’t pretty.

“I worked directly on NZ deal and assisted Australia. They have been going on for years, whilst India and the Gulf have stalled and the USA deal cut right back after failure of the big TTIP deal. A nimbler, less protectionist, pro-free trade UK is showing the way and leaving the EU behind.” 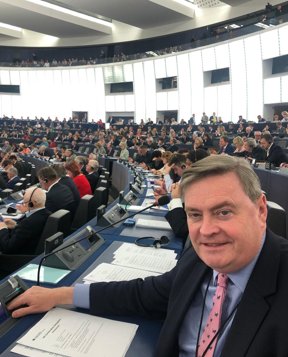 Should Australia even bother with the EU?

In 2019 when the UK was still an EU member country, Facts4EU.Org analysed the trade figures from the EU, from Australia’s Dept of Foreign Affairs and Trade (DFAT), and from the Australian Bureau of Statistics. 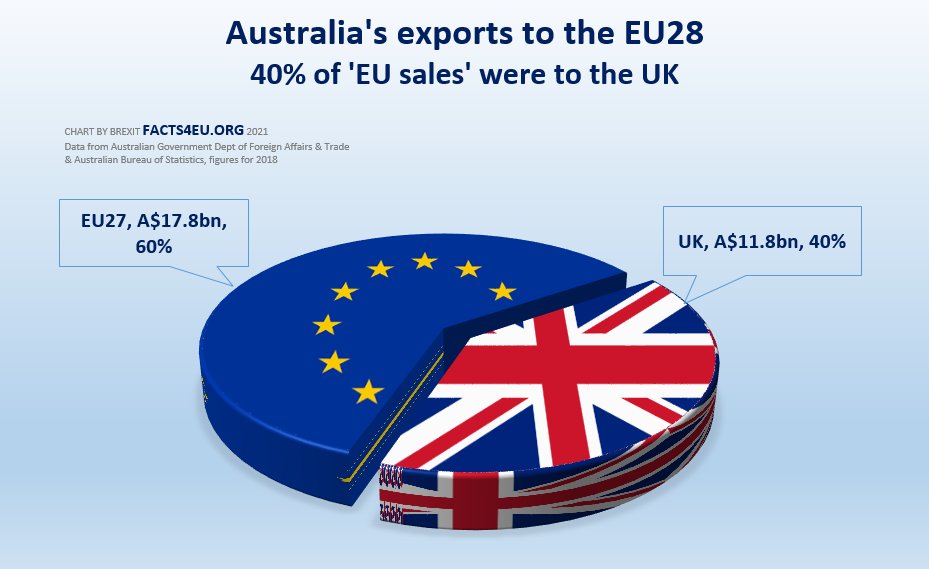 Looking at Australian exports, the UK accounted for 40% of Australia’s sales of goods and services to the EU28. So for Australia, when the EU28 lost the UK and became the EU27, the European Union plunged in size from nearly $AUD 30 billion down to less than $18 billion. 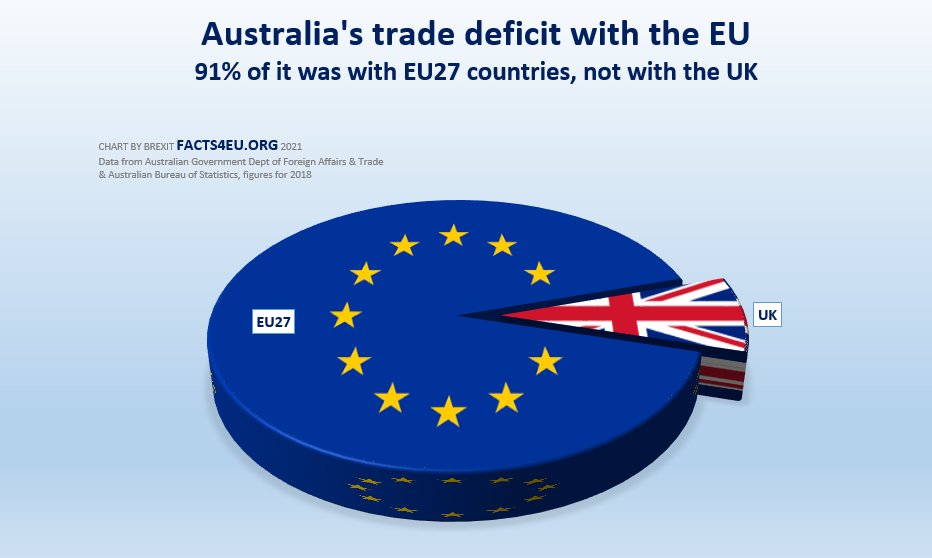 Looking at the balance of trade between Australia and the EU, in 2017/2018 it was negative to the tune of A$47 billion. In other words the EU was selling Australia 47 billion dollars worth of goods and services more than Australia was selling to the EU.

However, it was not Australia's trade with the UK that was the problem. 91% of Australia’s trade imbalance with the EU was down to the EU27 countries, not the UK, despite the UK accounting for 40% of Australia's EU exports.

Bonzer news about Brexit for Australia

The good news for Australia is that the EU’s loss is Australia’s gain. When the UK was freed from the EU’s common commercial tariff and protectionist policies, it became an even more attractive destination for Australian companies selling their goods and services.

Naturally it’s still worth Australia pursuing a trade deal with the EU27, if it can get them to reduce their protectionist high tariffs and the other barriers on so many goods that Australia would like to export to them. At the current rate of slow progress, however, this does not look like happening any time soon.

With regard to the new UK-Australia trade deal, the ‘usual suspects’ amongst the Britain-bashing, pro-EU lobby in the United Kingdom have been highly vocal in their opposition. This is interesting mainly because the precise terms of the deal have not yet been published.

It is also notable that none of these complainer-remainers seem to be concerned about the massive quantity of exports sent over the Channel by the EU, which completely dwarf any possible exports by Australia to the UK. These imports to the UK include food products and livestock. We find it odd that the pro-EU National Farmers Union seems to have no concerns whatsoever about the impact of the EU27 countries dumping their wares on the UK.

Facts4EU.Org will review the UK-Australia trade deal when the details are released.

[ Sources: EU Commission | Australian Dept of Foreign Affairs and Trade (DFAT) | Australian Bureau of Statistics | No.10 ] Politicians and journalists can contact us for details, as ever.

How can that be?! Remainers told me that the UK will never have any trade deals without the assistance of the EU.

Thank you for another excellent report showing why we were right to leave. Australia and other Commonwealth friends were treated terribly when the UK joined the Common Market (as it then was) in 1973. I hope we can now put this right. We should know who our friends are and they certainly don't seem to be our closest 'partners' across the channel.

the REAL reason that Brexit WAS, IS, and ALWAYS will be the right choice is that we chose ELECTED ACCOUNTABLE leaders, next time you speak to a remoaner please ask them if they think that progress can be made when you are run by unelected ?

This is great news, though I recommend British people should ALWAYS support British farmers and fishers first and foremost.
That said, I have no problem with companies that firmly believe in the United Kingdom and all it has to offer.
I also have no problem with the peoples of European sovereign countries (except for their elites), but I have a massive issue with the unaccountable EU commission who believe they can dictate to those sovereign countries with impunity - we've been there before!
UK Prime Minister Johnson should STOP this nonsense that the EU are our "friends" - NO Mr Johnson, they are NOT - they are commercial competitors of the United Kingdom (and they don't like the fact the UK majority decided to break free from their corrupted construct)?
I should like our REAL friends in the Commonwealth to know many of us have been 'fighting' for decades to restore what was.
Our problem was a corrupted [Tory] UK Prime Minister [Heath] in the 1970's, and others, then by PM Wilson [Labour], who was economical with the truth in 1975 - those who followed were not much better until the majority electorate had its way to restore Parliament.
For our true friends in the commonwealth, I ask they read declassified document "FCO 30/1048".
This document indicates how the UK government back then LIED to the British people, and COVERED UP their true intent.
This has been one battle in my lifetime to rid us of a corrupted EU, and I was EXTREMELY PROUD to vote to "Leave the European Union".
Prime Minister Johnson - Our REAL friends are those of the Commonwealth, and others who believe in us - The EU commission are trying to destroy our United Kingdom.