The great British banger and the EU's porky pies 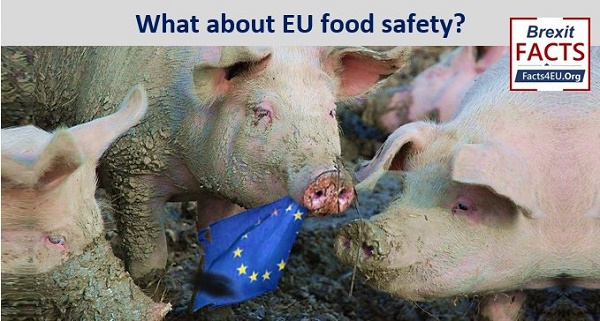 In recent weeks the National Farmers' Union and others have been gaining significant media coverage in their outrage over the possibility that Brexit Britain might in the future import more of its food from countries such as Australia, New Zealand, and the United States.

One of their key arguments relates to food safety. They claim that the British consumer will be inundated with unsafe meat. Facts4EU.Org has therefore looked at the EU's recent lowering of safety standards for the far higher quantities of imported meat from the EU which we have been eating for years.

If the EU wants to portray itself as a responsible regulator of food safety standards, it might be thought that they would be strengthening food safety regulations in order to protect the public, not rowing back on them. Not so, according to the European Working Community for Food Inspection and Consumer Protection (EFWFC) which represents the EU's meat inspectors.

The EU has actually lowered its food safety requirements

“Consumers are being exposed to an “avoidable risk” of disease after a reduction of official controls in food inspections of pig and poultry carcasses across the EU. Diseased meat is being eaten by consumers in the UK and EU, including pus from abscesses and tuberculosis lesions from pigs’ heads.”

“Inspectors stopped cutting lymph nodes in pigs’ heads, which are known to contain abscesses and tuberculosis lesions. Under previous systems, the pigs’ head would have been rejected for food, but now the meat is minced to make sausages and meat pies, spreading the pus from the abscesses and TB material throughout these products.”

“I don’t think you can prove it’s safe to feed people abscesses, pus and TB material.”

Mr Spelman also speculated on the reasons for the EU's reduction in its food safety requirements:

“These changes are motivated not by science or a desire to protect the consumer but are politically motivated to give the [EU] meat industry what they want: the reductions and eventual removal of official independent meat inspection.”

We are eating EU27 meat

Every year in the UK around eight million pigs are slaughtered for meat and the UK also imports pork meat from EU27 countries, partly because of British consumers' preference for certain cuts such as pork chops. Meat from pigs' heads is recovered by specialised boning plants and goes into pies, sausages and other processed foods. Millions of us consume this meat many times each year.

The UK’s farming sector rears millions of animals of all kinds for meat consumption, but the British consumer still eats over a quarter of this meat from the EU27 countries, and from further afield. According to the British Meat Processors Association, the pro-EU trade body:-

“Popular cuts of meat still need to be imported to meet the UK’s needs. Meat processing companies rely on imports for 26% of their supply, with the rest coming from UK farms.”

The size of the food safety problem

We looked at the Food Standards Agency's (FSA) report from January of last year. Here is what they said about 'foodborne diseases' - which most people would refer to as 'food poisoning':-

By any measure this effect on public health from 2.4 million cases of 'foodborne diseases' in one year is highly significant.

So what does the EU Commission have to say about all of this?

A spokesperson for the European commission said: “Any meat with lesions indicating an animal disease such as TB, or abscesses, or any pathological or organoleptic changes, must be considered as unfit for human consumption and not be placed on the market.”

The meat inspectors would doubtless agree with these worthy sentiments. However the problem as they see it is that the EU has reduced its safety requirements and ordered visual-only inspections of pigs. As the European Working Community for Food Inspection and Consumer Protection says: "There's no way to see those little abscesses, little tuberculosis lesions, without cutting those lymph nodes."

In the case of food safety standards above it seems that the EU claims one thing and does another.

"You are what you eat", as the saying goes. If that is the case then we are now worried about all the barbecued pork sausages we would normally consume over the summer. And we will never look at a pork pie in quite the same way again.

Help is at hand, and it's called being an independent country again

As result of Great Britain adopting all the EU's laws and Directives following Brexit, Great Britain is still bound by the EU's rules on food safety. Previously if the UK as a whole had wished to restore the previous rules where our meat inspectors could do more than a visual inspection of a pig which might be infected, we could not have done so.

Sadly Northern Ireland is still part of the EU's Single Market, with all EU Directives permanently in place. For Great Britain, however, from 01 January 2021 we were able to start setting our own rules. To date, DEFRA (the UK's Department for Environment, Food, and Rural Affairs) has not made these vital changes. We contacted DEFRA for their reaction but no-one was available for comment. We very much hope that EU-imported Directives will be amended as quickly as possible to reflect the needs and wishes of the British people.

The scare stories from pro-EU, UK bodies about trade deals with the likes of Australia and the USA

All we ever seem to hear from all the pro-EU trade bodies in the UK are warnings of lowering food safety standards by virtue of new trade deals in the offing with the rest of the world. We find it interesting that not one whiff of criticism or even concern ever seems to be directed at the massive imports of imported food from the EU.

In our example above we focused on one such concern: imported EU pork meat. Pork is not an isolated case, however. Don't even get us started on chickens and eggs from the EU.

Some of the Facts4EU.Org team are rather partial to a traditional British banger, as well as the odd pork pie, and we look forward to the day when we can once again eat them all with relish. In the meantime we suggest that a sound solution would be a visit to the local butcher for locally-made sausages and pies.

If you have been affected by any of the issues from this report, we have a solution for you. Please donate a little something to us today, so that we may continue fighting for a fully free, independent, and sovereign United Kingdom as soon as possible.

Absolutely gross! Fortunately we have a butcher close by who only sources his meat from local farmers. Don't touch the EU stuff!

And they made such a fuss over us maintaining their food standards?
Simple solution just buy British and not just packed in Britain and labelled as British.
Keep an eye out for that con

Imagine if Liz Truss were discussing a trade deal with the EU. What would the NFU say about the EU's food safety standards? Nothing at all, one imagines.

omg! Just buy British and buy from your local butcher

And the silence from defra is disgusting. Lucky nobody in the public sector is accountable. And its a shame tvat the 'sale of goods and services act' doesn't apply to these institutions. Inept? Corrupt? Or just conniving? Perhaps they have all eaten to much sausage.

THIS IS TRULY DISGRACEFUL, SICKENING, AND REVOLTING, which indicates a potential risk of harm to human health here in the UK.
Well done to the Brexit Facts4EU.Org team for exposing this important issue.
UK MPs must IMMEDIATELY repeal EU rules on food safety as being, 'not fit for purpose in the UK' - we can look after ourselves without EU interference - that's why the UK majority rightly voted to Leave?
ANY MPs or politicians in the United Kingdom who fail to oppose the EU commission on their food safety, as set out in the above article, should hang their heads in shame.
This can be repealed extremely quickly in the House of Commons using this evidence based article, and I for one WILL be watching which UK MPs and others actually address the matter at a political level?
British people can see through the spin UK politicians often try - in this case, that would be a bad move on their part.
Just another reason to dump the WA / PD, and NI Protocol (the latter should be done unilaterally and NEVER been agreed as it contravenes the GFA).
THERE IS NOW EVERY REASON TO BUY BRITISH (or from those approved by UK standards)?

If we had any courage we would instigate border checks on pork to make sure it passed current UK standards. Thereby delaying imports and increasing the price of EU pork.
But we won't.
Our pork regulations will simply move in lockstep with the reduced EU requirements. That is what the Level Playing Field means after all?

Can you share the Link of the source. So it can be read in context.