Trading places: With friends like the EU, who needs enemies? 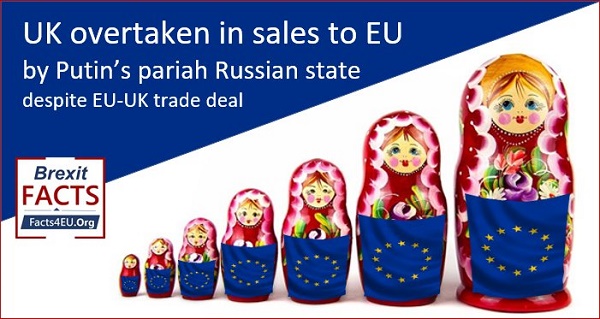 This year, UK’s sales to EU27 have dropped by more than for any other major country

Yesterday the EU published its trade figures for the first four months of this year. In its report, the EU’s statistics agency highlighted the following:-

“In the first four months of 2021, following the end of the transition period, in particular EU imports from the United Kingdom dropped significantly (by -27.1%).”

This drop was more than for any other country in the EU’s top 10 suppliers, by a long way.

In the same period, the EU bought 22.4% more from China. The Facts4EU.Org think-tank analyses the EU’s latest trade figures and wonders if the EU-UK trade deal is worth the candle.

EU sales to UK versus UK sales to EU 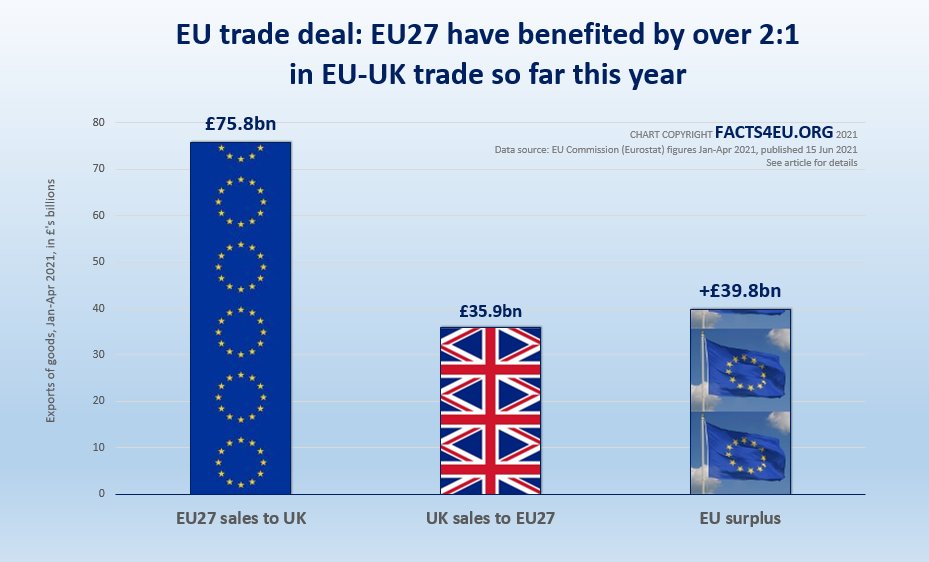 How does the EU’s closest major economy (the UK) fare, compared to other countries?

The EU’s closest major supplier – the United Kingdom - suffered the largest percentage drop of the top 10 EU27 suppliers. To take just one example, India managed to grow its sales to the EU27 by 14.4% compared to the same period last year, despite being in the grip of the ‘Delta variant’. By contrast the highly vaccinated UK’s sales to the EU27 dropped by 27.1%. 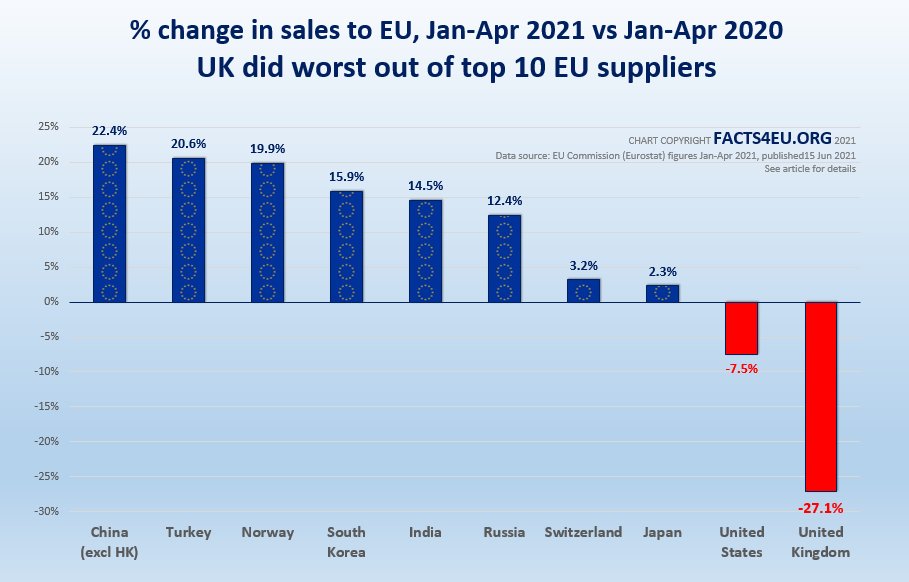 Incredibly and for the first time, Vladimir Putin’s Russia - a pariah state supposedly subject to EU sanctions - has overtaken the United Kingdom in sales to the EU27. It is now the third largest supplier to the EU, after China and the USA.

Russia’s economy is only 55% of the size of the UK’s economy, and yet so far this year it has sold more goods to the EU27 than has the UK.

The EU’s punitive behaviour towards the United Kingdom

Below are three basic facts which might help to explain the numbers.

2. The UK has unilaterally allowed EU firms ‘equivalence’ to operate in financial services in the UK. The EU has done the opposite, actively trying to prevent City firms from operating in the EU.

3. The UK has unilaterally relaxed the EU’s imposed customs controls on GB products entering Northern Ireland, to preserve peace and maintain the territorial integrity of the United Kingdom. The EU is now taking the UK to the EU court for this.

The rote response from those who wish ill on an independent and sovereign United Kingdom to any such news is to say: “See, Brexit is a disaster, we told you so”, or words to that effect. Never once do they question whether it is the EU’s appalling behaviour towards the UK which is at fault.

It really is time to say enough is enough, ditch the N.I. Protocol, and go WTO

In two weeks’ time the UK Government must decide whether it will impose the EU’s rules making GB sales of sausages, burgers, and cold meats into Northern Ireland as difficult as possible. If – as it should – the UK Government refuses to impose these vindictive and nonsensical EU rules, the EU will almost certainly retaliate against the UK with more legal action to claim penalties, and by taking action to introduce tariffs on UK goods going to the EU.

The figures in our report above show how the EU’s closest major partner in trade is not benefiting from the so-called EU-UK ‘Trade and Cooperation Agreement’ signed by Boris Johnson. Quite the reverse. The EU27 are well on the way to increasing their massive trade surplus with the UK.

Facts4EU.Org were the originators of the ‘Go-WTO’ campaign in 2017. We wrote repeatedly that the EU would never behave reasonably and that the UK was better off going for trade on WTO terms. Our position is unchanged.

[ Sources: EU Commission latest international trade statistics 15 Jun 2021 ] Politicians and journalists can contact us for details, as ever.

This is all planned and managed against the UK.
Remember the ham sandwiches and welcome to Brexit.
Soon enough the UK gov will have no other option but to take a harder stance towards the EU.
We still have corrupt civil serpent's and rejoiners orchestrating against us behind the scenes.
I need to buy a car soon and was thinking vw, not now.
I'll get Toyota, Nissan, vauxhall, Ford.
No more Eu items in my shopping basket.
Rejoiners will delight in trying to point out this is what happens when you leave your largest trading block, bla, bla, black sheep.
Their response already annoys me.
This is what happens when you strive for freedom against a hostile faction.
We have been to accommodating to demanding arrogant Eu elites. Things will change shortly.

And when confronted with the disparities, ask yourself why our government has not shut the ports?
The answer is simple, they do not represent you. And you are to be punished. Mark twain wrote 'if voting changed anything, they would not let you do it' I would say that the brexit vote changed much more than the masses understand. Sickening to watch as they put you back in your box.

Are you actually serious?
This is dishonest manipulation of the truth and the exact kind of lie that caused Brexit in the first place.
When we left the EU we gave up free access to the EU. This meant our good would be disadvantaged when selling in the EU. It means buyers would have to pay import tax, goods would have to pass through customs and the whole process would be slower, more expensive and more time consuming for an EU purchaser, when comparing against an EU retailer.
Which option would you choose?
Has the author tried buying goods on Ebay from the EU since Brexit? Did you enjoy the (unexpected) tax bill from customs and the 1 week delay? Do you think that would discourage you from buying from there again?
Maybe you are complaining because you want the EU to waive all its import rules for us and let us run free-but now do so for other countries? Even though we stuck two fingers up at them by leaving.
Unbelievable lies and manipulation from you Brexiteers

The EU were never our friends.

Alex, luckily, rejoiners like you never lie. They always display such honesty, good manners and intelligence... Oh how much we wish that was vaguely true.
PS. So sorry you can't buy gadgets from Ebay, damn Brexit... Never mind maybe you shuld buy from Russia like the EU. Quality, compactness, high technology, what more one can want?

Hi Pam,
Are you suggesting that I should not be buying goods from the EU?
If so, should they be buying from us?
Also, are you insinuating I am lying about something? If so, what am I lying about?

Alex have your carer turn the lights on next time you read, then perhaps you can see. There is even a lovely picture to show you that the door is swinging but one way,that would be their way. Sold out from within by greedy traitors.

Hi One eyed king,
I am confused, are you trying to have a discussion or are you just looking to insult me?
Could you elaborate what you mean?
Do you mean that because we are buying from them, the EU leaders should round up buyers for our products and force them to buy them?
Or do you mean that because we chose to relax rules on importing from the EU, they should automatically do the same even if they do not want to?
Or are you saying that we should copy them and be more strict on imports?
Why do you think our government is relaxing their rules? It is because if we prevent EU imports we will have a shortage of goods and therefore prices will rise and we will all suffer. Our government is not doing it out of the kindness of their hearts, they are doing it out of necessity and to hide the downside of Brexit.
The EU on the other hand has no such shortage and has no need to compromise its rules and morals for a country who betrayed it
More fool us we lose both ways - EU still sells plenty to us, but buys nothing. What a weak and embarrassing situation to be in for us.
And even better our people cant see it and believe all the lies they are told

Alex, I normally steer clear of personal comments though I am more than frustrated with disconnect between the article and your comments. In fact in your rebuke, you allude to the point of 'rounding up buyers' that is exactly what the EU do. And the equivalences written in the trade agreement is being ignored by them aided by the 5th column here. Read the article again, and if you maintain your conclusion then we would have nothing to discuss.
Finally it is the people of Britain who have been betrayed, and sooner or later they will respond.

Every cloud has a silver lining. These figures should be a wake-up call to everyone that we don't need to be tied to EU, because there is no gain?.... We get nothing but red tape and abuse from them. Stop talking and start walking. WTO now.