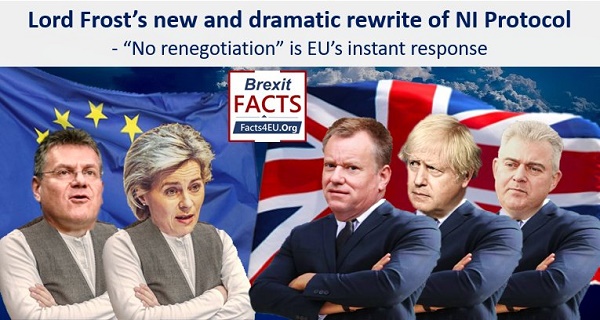 Barely had Lord Frost and the N.I. Secretary Brandon Lewis sat down yesterday after their respective statements to the House of Lords and the House of Commons on the N.I. Protocol, than the EU’s Commissioner and Vice-President Maroš Šefčovič sprang up in Brussels to declare: 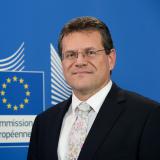 What is the UK Government now proposing to the EU?

In this report Facts4EU.Org summarises the UK Government’s 28 page ‘Command Paper’ setting out its proposals to alter the N.I. Protocol radically in order to make it work for the people of Northern Ireland and Great Britain - and to protect the Belfast (Good Friday) Agreement. We also provide a link to the full paper. Finally we comment on these developments in our ‘Observations’ section.

In Facts4EU.Org’s 12 bullet points above we have necessarily summarised the key points. The UK Government’s Command Paper naturally is more nuanced and pays lip service to the existing N.I. Protocol. The net effect of the proposed changes, however, represents a complete rewriting of many of the most fundamental areas.

Readers can access the full text of the 28-page Command Paper here.

The Prime Minister’s foreward to the Command Paper

Below are some excerpts from Prime Minister Boris Johnson’s foreward to the Command Paper issued yesterday.

“It has already become clear that it is not possible to operate these arrangements in a way that can be sustained, particularly not in the inflexible way the EU seems to want.”

“The impact of the Protocol has been profound economically, politically, socially, and commercially. Within Northern Ireland it has placed strain on institutions which have already been challenged by the COVID-19 pandemic. Some have begun to fear – wrongly – a growing separation of Northern Ireland from the rest of the UK, notwithstanding the principle of consent enshrined in the Belfast (Good Friday) Agreement.”

“…It is increasingly clear that we cannot solve the problems simply by a rigid and unpurposive application of the Protocol in its current form. Indeed the difficulties are so profound that I have had to consider whether safeguarding action is necessary under the Article 16 framework which the Protocol provides.” 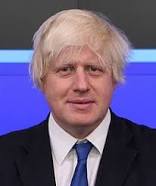 Bravo, Lord Frost. In effect you have taken a significant number of the most egregious elements of this appalling Protocol and are proposing to scrap them on the basis of the damage they are doing to Northern Ireland and to the sovereignty of the United Kingdom.

We would have gone much further of course and would have drafted a completely new document based on a common-sense approach to the particular conditions which exist in the province. This would place Northern Ireland once again under the laws of the United Kingdom, not a foreign and malevolent power, and would bring NI back fully into the Customs and Single Market territory of the UK.

Be that as it may, the Command Paper must have caused apoplexy amongst the Soviet-style Kommissars in Brussels when they read it.

The EU Commission’s statement was issued almost immediately and it held no surprises. Lord Frost will have known this would happen, so we believe that the Government is finally getting ready to take firm action. No doubt the UK’s ambassadors around the world are being briefed on the UK’s attempts to resolve the worrying and dangerous situation which the EU has created in Northern Ireland. Based on past experience we hope that Dominic Raab will be putting a bomb under his diplomats in order to deliver this essential PR exercise, given that they have been almost entirely useless on anything Brexit-related up to this point.

The simple fact is that the authoritarian, dictatorial and unelected autocrats in Brussels have instantly refused even to negotiate seriously, despite being faced with demonstrable evidence of the effects on ordinary people and businesses that their absurd and anti-democratic imposition on the UK is having. What makes this even harder for the Kommissars to defend is that they have used a sledgehammer to crack an almost non-existent nut.

[ Sources: Cabinet Office | EU Commission ] Politicians and journalists can contact us for details, as ever.

This not implementation of an agreement by the EU, this punishment, plain and simple. The EU is acting in bad faith and has no interest or desire to make it workable.
I work in UK food industry but am not involved in NI business.
However, today the Telegraph reported comments made by the chairman of M&S, Archie Norman. He gives a snapshot of what is actually going on in the food supply chain:
"To get clearance at ports, M&S accounts for 40,000 pages of paperwork a week for goods into Ireland. From October that number trebles to 120,000 pages a week. Just one error in these documents, which can be unrelated to food safety – such as a typing error on a product code – could lead to an entire truck of 650 items being refused, the retailer said.
There have been instances of trucks being turned away as agents rejected paperwork because of ink colour used or the position of a particular stamp, Marks & Spencer revealed. Mr Norman added: “There is no other outcome for consumers in Northern Ireland in the end other than higher prices given the inflationary pressures being put on to retailers by the regulatory regime.”
"

This protocol was always going to be a dead duck and to be fair i've seen you attack it all the way. It's hard not to look back and ask why it was ever agreed to but that doesn;t help us in these days.
Now we must focus on getting out of this mess and I hope you're right that Lord David Frost is working to a plan. He has presneted a proposal and the EU immediately said no, as they would. So now or soon he can say to the world "see what they're like?" Then maybe my part of the United Kingdom will truly be part of the United Kingdom again because we certainly aren't now. Please everyone support us, we need your help.

Always helpful to have your summaries like this, thanks. Please keep the pressure up. A modest donation is winging its way to you.

Of course they will dismiss it out of hand. They are only interested in subjugation of nations.

If Lord Frost was allowed to do the right thing, it would be to unilaterally scrap the Protocol to bring Northern Ireland back into the U.K. and free it from EU rules. However I very much doubt our government has the stomach for this, so the best we can hope for is that he triggers Article 16 and soon.

I'm not even sure where to start as I'd effectively have to re-write the entire article to make it factual - but here goes.
You say: "... the UK’s attempts to resolve the worrying and dangerous situation which the EU has created in Northern Ireland."
Leave voters created this. There was ample warning about this.Predictably, critical thinking was mocked as "Project Fear".
You guys really need to stop shifting blame when the entire world knows. It's 2021 - the information age, not the carrier pigeon age.
Without pausing to realise that all this was initiated by the UK, you continue to say
"Based on past experience we hope that Dominic Raab will be putting a bomb under his diplomats in order to deliver this essential PR exercise, given that they have been almost entirely useless on anything Brexit-related up to this point."
Domic Raab is on official record & film archive as saying in 2019 that he had not read the Good Friday Agreement. A former Brexit Secretary. The latter pasrt of the sentence is a true representation of objective reality.
Mindboggling - but hey, what's not about the whole Brexit palaver? If anyone is seriously looking for competence among the architects of this self-inflicted injury, there is none. Self-enrichment is the goal.