We’re already losing N.I. - are we about to lose Gibraltar too?

Why are the border guards of a foreign (EU) power to be deployed at Gibraltar airport? 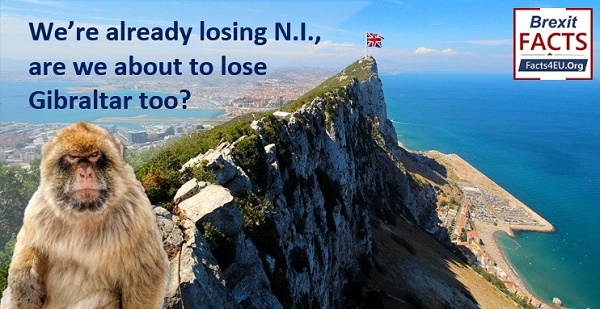 Brexit is by no means 'done', when very serious issues like this remain

On New Year’s Eve, a deal was done on Gibraltar, which is excluded from the new UK-EU ‘trade deal’ because of a veto granted to Spain.

“Under the agreement between the United Kingdom and the European Union, Schengen's closest member state [Spain – Ed.] will be the one that will be taking responsibility for what happens here as regards the European Union under the treaty.”

What, who, where is Gibraltar?

Gibraltar is a British Overseas Territory. Its head of state is Her Majesty Queen Elizabeth II, who is represented locally by the Governor of Gibraltar. For centuries the people of the United Kingdom have been able to arrive in Gibraltar, be greeted by Gibraltarian border guards, and step onto British soil.

This is all set to change under the latest plans provisionally agreed between the UK and Spanish governments.
Once you are waved through by Gibraltarian border guards you’ll be faced with the EU’s Frontex force,
before being able to enter the supposedly-British, supposedly-sovereign, territory of Gibraltar.

Just what has the Government agreed to this time?

“Working side by side with the Chief Minister of Gibraltar, and following intensive discussions with the Spanish government, we reached agreement on a political framework to form the basis of a separate treaty between the UK and the EU regarding Gibraltar. We will now send this to the European Commission, in order to initiate negotiations on the formal treaty.”

As ever, the devil will be in the detail, and so far the detail does not look good

It was Spain’s Foreign Minister, Arancha Gonzalez Laya, who first announced the deal at a press conference in Madrid. Evidently pleased, she told the press that Gibraltar will become part of the EU’s Schengen zone: the supposedly-free travel area within all EU member states. (As we have previously reported, the EU’s Schengen Zone hasn’t functioned properly for many years - long before the Covid crisis.)

Mrs Gonzalez Laya went on to explain that Schengen controls will be applied at Gibraltar's airport and port "with the assistance" of the EU’s Frontex officers. She added that Spain, as a Schengen member, would be "the guarantor" of those checks.

Gibraltar’s Chief Minister has been at pains to explain that no members of the Spanish border guard will police the border at the airport and port, but he seems to have glossed over four important points.

A brief summary of the background and the importance of Gibraltar

Gibraltar occupies an area of 2.6 square miles at the southern tip of Spain. Crucially Gibraltar has geographical and therefore strategic significance, with a large British naval base and an airport used by both civilian airlines and by the RAF.

Militarily Gibraltar has further importance for the United Kingdom and its allies. It is home to a location of UKSIGINT – the network of signal interception stations all around the world. This network is part of what makes the UK a leader in the global western intelligence community – a status which the EU has yet to achieve.

Gibraltar has been British for more than three centuries (307 years), since the Treaty of Utrecht when Spain ceded Gibraltar to Britain in perpetuity. In the 1950s, Spain’s fascist government of General Franco laid claim to Gibraltar – a claim which persists to this day.

In Gibraltar’s 1967 referendum, 99.6% voted to stay British which resulted in Spain severing the land border with Gibraltar as well as all communication links. It was a severe action taken by Spanish dictator Franco to beat the plucky Gibraltarians into submission. This action by Spain had followed years of increasing restrictions placed on Gibraltar by the Spanish, and the Gibraltarians never buckled.

The Spain-Gibraltar border was only fully re-opened in 1985 – and the Spanish only did this because it was a condition of Spain joining the then EEC.

Gibraltarians voted massively to stay British - 53 years ago, and again in 2002 rejecting a 'shared sovereignty with Spain' deal dreamt up by the FCO. In each case they voted by 99% for full British sovereignty.

In 2016 they also voted massively to remain in the EU - by 96%. Their reasons were of course very regional, and based on deep memories of the actions of the Spanish to them in the past. Nevertheless, once the rest of the UK's majority decision was clear, they stood behind the UK.

In the coming months negotiations will take place between the UK and Spanish governments, as well as with the EU, and the fate of Gibraltar will be decided in the details of the treaty which will then be signed.

This time there is absolutely no excuse. MPs have time to start raising this issue in the Commons, well before any treaty is placed before them to vote on. Now is the time to ask the difficult questions - and to stand up and be counted.

Gibraltar is British, strategically important, and it must NOT be sacrificed - and neither should Northern Ireland.

Finally, we continue to seek donations from readers so that we can continue to be a serious voice for independence, sovereignty, and freedom in a world which is increasingly shutting down voices like ours. If you believe in these things, and in freedom of expression, please donate today. Quick, secure and confidential, the donation links are below or you can use our ‘Donate’ page here. You will receive a warm and friendly email from a member of our team. Thank you so much for helping.

[ Sources: Foreign & Commonwealth Office | Gibraltar House of Assembly | Gibraltar Chronicle and Spanish press ] Politicians and journalists can contact us for details, as ever.

NONE of this really matters anymore, we lost, leavers that is.
The big issue is now at home, in case you hadn't noticed your freedom is being taen away on the pretense that there is a deadly disease circulating.
There isn't.
Forget Gibraltar for the moment SAVE mainland Britain instead, everyday that passes will make the fight so much harder,
IT WAS NEVER ABOUT A VIRUS.

We should put our own border guards there too.

I'm pretty sure I was once greeted by the exact same border guard you have on your picture! Apparently my papers were in order but my crisps had to be confiscated.

Rather telling that peter mandelson has backed boris's deal, and blair. 2021 welcome to pootopia, where things can only get worse. Enjoy

Gibraltar needs independence. It wants to be British but wants to be in the EU. You can’t have both. Cut it loose to survive on it’s own.

This under a so-called Conservative government, that is in fact following the laws according to Soros, like puppets on a string.
Hook, line and sinker for the WEF's great reset or communism. We are supposed to be happy with the prospect of 'owning nothing' knowing full well that the architects of this madness will be more than happy to keep what they have and probably treble it in the process!

Boris's deal is starting to reek.

The sooner more countries follow the UK's lead & get out, no doubt on much better 'term's' than the UK are getting, although that wouldn't be too hard, the better to prove as to how correct we were in voting to do so! Not that we doubt it! Scrap this surrender, trap filled, Rejoiner style Brexit non-deal! It only benefit's the EU & it's Rejoiner anti-demorcratic puppet's! The more that is exposed of this, I can't really type what I'd like to in regards to this surrender, the more I'm becoming to the support of the new Reform UK Party. Let's face it, we couldn't be any more worse off, given what we've seen already, can we?!

Comments 1 and 6 - are absolutely CORRECT. Lockdowns and draconian 'Covid' policies were NEVER about a virus which has never been identified, but all about subjugation and control, fuelled by lies and a multi-million £ programme of psychological warfare waged against the people in order to terrorise them into taking an experimental and potentially lethal vaccine to facilitate the reduction of the world's population. Although important, Brexit (or rather the pretend Brexit we are being given) almost pales into insignificance compared to the perilous situation we are in with regard to the duplicitous and destructive Marxist tyrants in our Government who are stripping away the freedom and liberty for which we fought so hard in two World Wars, and who are ruthlessly destroying this nation and the economy in pursuit of the sinister World Economic Forum agenda. Our braindead politicians are complicit in this; either in inexcusable ignorance and stupidity or in full knowledge. We are staring into the abyss of a dystopian hell. Only FIFTEEN MPs voted against the latest murderous lockdown, compared to 55 last time! I am writing to all 15 of them and asking them to unite and liaise with other anti-lockdown organisations and high profile celebrities, such as the admirable Lord Sumption, in order to give us an influential voice, before it is too late. This is globally orchestrated and the extreme oppression in other countries such as Canada and Australia and elsewhere, has reached unspeakably terrifying and chilling levels.
I hate to say 'I told you so', but our treacherous Globalist Prime Minister, Boris Johnson, is the worst and most DANGEROUS Prime Minister in the history of this island!

@ Babrbara Jell, if only there were more like you.
I am quite old and will not see the end result of all this, but my children will.
The future is truly frightening.