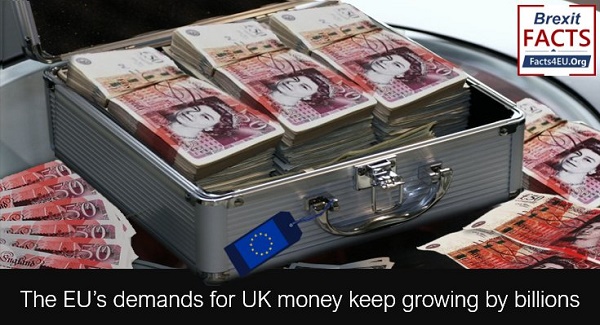 A Facts4EU.Org Sunday update and summary of the problems with the EU’s “divorce bill”

On Friday we published a report showing the enormous share of the EU’s pension and employee benefits to be paid by the UK to the EU for the next 44 years. This is as a result of the EU’s Withdrawal Agreement, agreed by Theresa May, and signed by the current Prime Minister in January last year.

Regrettably the situation for UK taxpayers and the public is even worse than we first reported, as we suggested it would be on Friday. The OBR did not update its annual payments table in its usual Spring report in 2020 and so we used their 2018 Spring publication as the basis for our Friday report. We now know that the total has increased by £2.6bn to £12bn. 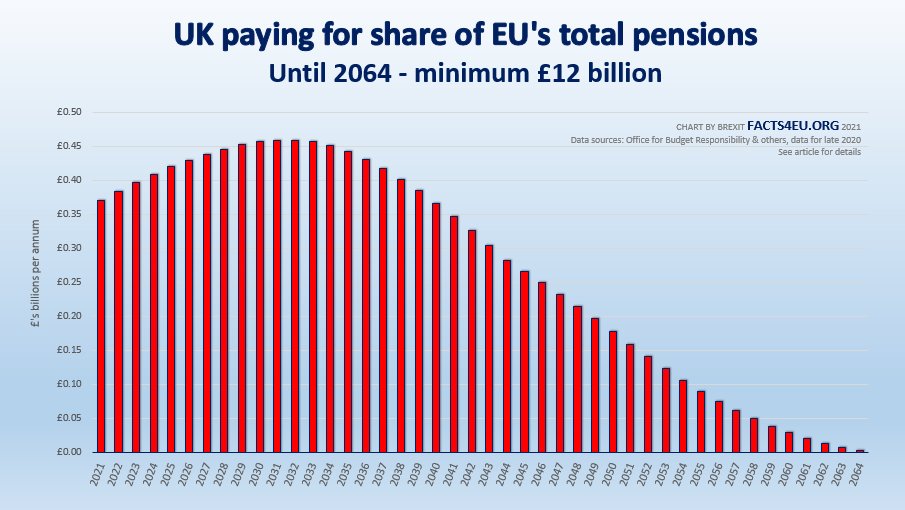 We always use conservative figures

This vindicates what we originally wrote, that: “… these figures were calculated in 2018. We now know that the European Commission’s financial accounts for 2019 showed a €17.2bn increase in the net liabilities of its pension scheme.” We then calculated the UK’s share of the EU’s increase on a pro-rata basis.

We always try to estimate conservatively when exact official figures are difficult to come by. In this case we only had total figures from the Commission and not the OBR. The true figure issued late last year is even higher.

Since our report on Friday we have seen many people on social media saying that they don’t believe our facts, or that this amount is for UK employees of the EU and it is therefore reasonable for the British public to pay.

Isn't this only for British employees of the EU?

This is NOT the case.

As we made clear in Friday’s article, the UK is paying for a share of the EU’s TOTAL pension and employee benefits pot, NOT the amount purely for UK employees of the EU.

In Friday’s headlines we used the figure of £10bn as a minimum. That alone was bad enough. We are now able to update that figure to £12bn, using official sources. All we can say is that if readers thought that £10bn was bad enough, it is in fact 20% worse than that.

This £2.6bn increase in payments for the EU’s pensions and employee benefits highlights the problem with the EU’s ‘divorce bill’ as a whole. No-one knows what the final total will be – we can only estimate.

It is the EU which gives the UK information on what must be settled, and these numbers will appear from them for decades to come. This could still be happening in 2064 – forty years from now.

We confidently predict that the British people will never be told the overall total of payments from the UK to the EU from the time the majority voted to leave, in 2016. Nor indeed since the UK first joined what was then the EEC, in 1973. One of the many reasons why we believe this to be the case is that the official figures for net annual contributions have only ever included payments to the official EU annual budgets.

Facts4EU.Org has previously reported many times on the EU’s “off-budget” funds which the UK has contributed to – and which the UK will continue to do for up to another 10 years. We refer to these payments as “off-the-books”, because from the public’s point of view this is what they are. They do not appear in the official tables of the UK’s net contributions. Below are some of these “off-the-books” EU funds.

Payments by the UK into the EU's 'off-budget' funds

Following years of us campaigning on this subject, these ‘off-budget’ funds are now mentioned by civil servants in official reports, but the sums involved are still never included in any of the overall totals of net contributions to the EU.

Bodies such as the OBR and HM Treasury get around this by including these payments under other headings. For example, some of these payments appear as part of ‘foreign aid’.

Wouldn't you love to know the truth?

We believe that millions of people would like to know exactly how much the EU has been costing us – and will continue to cost us for the next forty years. This is not an unreasonable request, in our view.

We can tell readers from five years of experience, working seven days-a-week for long hours, that it is immensely difficult to find the level of information required to present a full picture from official sources to the British people – on almost any matter related to the UK’s EU membership. We believe that our task has deliberately been made difficult by the Remainer civil servants who work on such things, although we have no hard evidence to back this up.

If Facts4EU.Org is able to keep going as a team, (a very big 'if'), one job we would like to complete is the fullest-possible presentation of the overall costs of EU membership – up to 31 December 2020, together with an accurate overall estimate for the decades following. We think the public have a right to know.

Unfortunately it may not be pretty

One thing we can guarantee: the numbers will be much worse than those which have so far been presented to the public so far. If anyone doubts this, just look at the payments to the EU which have not been included under ‘UK net contributions to the EU’ each year.

Or just look at the £2.6bn increase in UK payments for one specific area – EU pensions and employee benefits – which we have highlighted above. This increase happened in just two years before the UK had even (technically and in name only) left. Imagine what will happen over the period of the next forty years, unless a tight grip is exerted?

A firm hand in government, combined with the publication of far more accurate figures for the amount the UK will pay to the EU, would undoubtedly save the country billions. At a time like this, wouldn’t that be a worthwhile cause for readers to back?

Can we and should we carry on?

We are struggling and we need your help. We have far more to do in researching, publishing, campaigning and lobbying Parliament than we have in terms of the financial resources to fulfil these tasks. We rely 100% on public donations from readers like you. Unlike the Remain/Rejoin camp, we do not have foreign billionaires to subsidise our work.

If you believe in a fully-free, independent, and sovereign United Kingdom, please make a donation now. It’s quick, secure, and confidential, and you can use one of the links below or you can use our Donations page here. You will receive a personal, friendly ‘thank you’ from a member of our team within 24 hours. Thank you so much if you can help to keep us going in these critical months ahead.

[ Sources: Office for Budget Responsibility | Withdrawal Agreement ] Politicians and journalists can contact us for details, as ever.

We've left, or supposedly so! Give them nothing more & use it for the UK's need's instead!

Mrs May fixed it to protect their pensions!

At least the NHS now gets £350 million extra a week.

Extremely alarming and particularly in respect to the United Kingdoms present enormous indebtedness situation. Indeed Facts4u are I am certain correct in thinking that millions of people will have no idea of these facts and would be appalled at learning them, so we must do our best to alert people through any means possible-and to our own MP's who must have some idea of what is going down.

We have to face the fact, we've been screwed. Those who tried to say so before he rushed it through at lightening speed were told to shut up and not spoil everybody's celebrations. Now the dirty little small print will come out.

That'll probably explain why it took Tory peer Daniel Hannan less than a week after Brexit to call for
-the scrapping of worker rights
-the removal of the ban of GM foods
-- The REACH Directive, which outlaws chemicals linked to health problems including cancer, thyroid disease,
hormone disruption and slow development.
-- The Alternative Investment Fund Managers Directive (AIFMD), introduced to regulate hedge funds and private
equity following the 2008 financial crash.
It's not just the EU demanding money.

@ Rob, so why as it cancelled almost everything other than the scam covid?

Maybe the £350 million a week was also a scam & the NHS is financially forced to cancel stuff??
I don't know, ask the researchers here. They are the EU experts & may have the time to answer now that Brexit is done.
Covid is not a scam however, too many have died from it. It would be silly to not take precautions.
I won't stop those who don't though. It's easy to identify & stay away from someone without a mask.