EU admits UK’s departure will cost it another €70 billion

The EU’s economy has already dropped by over €2.5 TRILLION as a result of Brexit

Facts4EU.Org reveals the shocking economic facts for the EU, from the EU’s own financial report

Facts4EU.Org has analysed the EU’s own report on its economic prospects, which we obtained on Friday (19 Feb 2021). Our analysis reveals the true extent of the massive cost to the EU in losing the United Kingdom - its second-largest economy.

Not only has the EU’s GDP plunged on Brexit, but the EU Commission now admits that the EU’s GDP will continue to be hit in the coming years. A further €70 billion will be wiped off the EU’s economic output by the end of next year, according to the official EU report seen by Facts4EU.Org on Friday.

1. EU now admits its growth rate will fall for the next two years as a result of the UK leaving 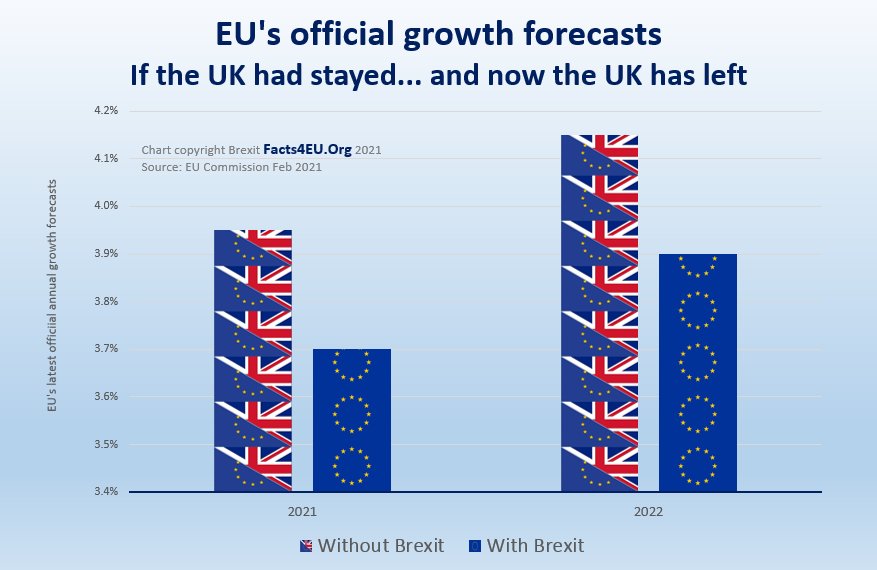 2. The EU’s economic size has already plummeted after its 2nd largest economy left

The latest figures reported by the EU's official statistics agency are for 2019 and show: 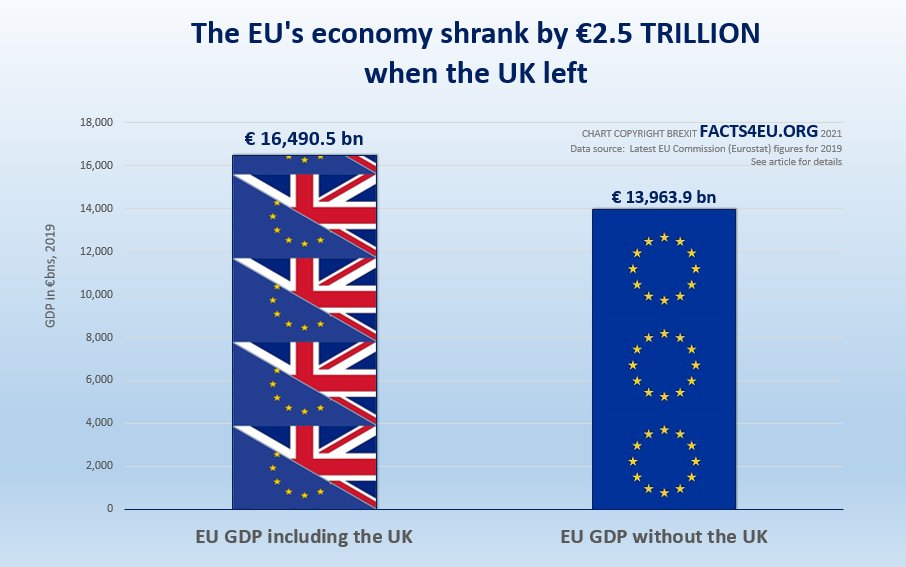 FACT:
When the UK left the EU, the EU economy plummeted by over 15% overnight

What did the EU actually say?

In its latest annual report on its economic prospects, as usual the Commission continued to try to make light of the loss of the United Kingdom. Nevertheless even they were forced to admit that the EU will grow less fast, as a result of Brexit.

“For the EU on average, the exit of the UK from the European Union on FTA terms is estimated to generate an output loss of around ½% of GDP by the end of 2022.”

Naturally they are not able to bring themselves to make any statement that the EU's economy has in fact already shrunk very significantly. When the United Kingdom formally left the EU on 31 January 2020, the EU's GDP plummeted by 15.3% overnight.

However, it could have been even worse. If the EU had not secured its ‘Trade and Cooperation Agreement’ with the UK on 24 December, the economic effects for the EU would have been more severe.

“The agreement reached between the European Union and the United Kingdom on the terms of their future cooperation, reduced the cost [to the EU] of the UK’s departure from the Single Market and Customs Union”

“Member States with a higher share of goods trade with the UK therefore benefit relatively speaking more from the FTA than those with a higher share of trade in services. In sum, while the FTA improves the situation as compared to an outcome with no trade agreement between the EU and the UK, it cannot come close to matching the benefits of the trading relations [to the EU if the UK had stayed a member].”

The Euro is in intensive care, the EU economy has plummeted, but the EU fanatics sail on into the storm

The EU really doesn’t get it and it seems that it never will. In addition to publishing its first 'Economic Forecast' of 2021 which we have reported on above, last week the EU Commission also made a statement about its new trade policy for the future:

“The European Commission has today set out its trade strategy for the coming years. Reflecting the concept of open strategic autonomy, it builds on the EU's openness to contribute to the economic recovery through support for the green and digital transformations, as well as a renewed focus on strengthening multilateralism and reforming global trade rules to ensure that they are fair and sustainable. Where necessary, the EU will take a more assertive stance in defending its interests and values, including through new tools.

“Addressing one of the biggest challenges of our time and responding to the expectations of its citizens, the Commission is putting sustainability at the heart of its new trade strategy, supporting the fundamental transformation of its economy to a climate-neutral one.”

The entire world is reeling from the extreme reaction that governments globally have taken to the Covid virus, large numbers of businesses have already collapsed and far more are on the verge of collapse, and millions of people’s jobs across Europe have either been lost or are threatened.

Despite this, the ideologically-driven fanatics in Brussels sail on regardless, in the knowledge that their high salaries, huge perks, and privileged lifestyles are safe, regardless of the tempestuous seas faced by ordinary people.

Instead of focusing on liberalising the EU's trade policies and opening up its markets, the EU apparatchiks continue to double down on their obsessions with 'sustainability' and a variety of ideological objectives. Last year the EU's economy faced a double whammy: the departure of its second-largest economy, and the devastating effects of Covid. The EU suffered the biggest fall in GDP in its history, but readers would never know this by listening to the unelected bosses of Brussels.

Who else provides such stark analyses of the real picture of the post-Brexit world, based on official facts? The BBC? Sky News? ITN? The Times or Financial Times?

We are most grateful to readers who have donated so far this year, but we badly need more readers to do the same if we are to continue into our sixth year - researching facts, scrutinising, publishing, and lobbying MPs. Quick, secure, and confidential donation links are below this article, or you can use our Donations page here. If you have never donated before, please, please, keep us going with a donation now. Thank you so much.

[ Sources: EU Commission | IMF ] Politicians and journalists can contact us for details, as ever.

Thank you for this great analysis. The EU is built on pretence and it always will be their defining characteristic. Propaganda is the bread and butter of any totalitarian state like the EU.

Eu is not our problem, just the poor deal Boris agreed to that should be binned and we should go wto to complete the break .

Has everyone noticed the vertical axis on the first graphic? It starts at 3.4%, not zero. This has the effect of visually exaggerating the difference in heights of the bars. If the plot axis had started at zero, the differences (about 0.35% in 2021 and 0.26% in 2022) would be barely noticeable.
0.5% GDP lost growth by end 2022 -forgive me for feeling distinctly underwhelmed by this.
Can you provide the equivalent figure for 2022 UK GDP lost growth for comparison?

Productivity growth actually dropped in the years immediately after the UK joined the EU in 1973, although trade rose slightly.
More striking still, the decade or so after the inception of the EU single market in 1992 saw UK productivity growth flat despite a clear rise in the export to GDP ratio. And since 2007, UK productivity growth has slumped even as the export/GDP ratio has trended higher still.
A firm-level study by the ONS shows that exporters to non-EU countries are about 20 per cent more productive than non-exporting firms – but for exporters to the EU, the ‘productivity premium’ over non-exporting firms is minimal. The study also shows evidence of a negative link between export intensity and productivity. These findings make it hard to argue that reduced exports to the EU, resulting from Brexit, would have large negative effects on aggregate UK productivity.

Shining the light mr Hatfield, perfect rebuttal to perpetual nonsense. Its not the amount of money invested in this eu project, its whose money

Why should the British buy anything from the EU after the treatment they doled out on the UK during the 4years post Referendum?

it is sad that people still see 'success' in monetary terms only !!, we have had a great success in democracy which is priceless

Congratulations once again on getting some basic stats correct and then totally mangling the analysis.
A more common sense view:
- the EU's GDP has got smaller because someone has left. Shock horror. It would have got smaller if Malta had left. Must be a slow news day
- GDP growth in 2021 without the UK is slower than with. Look back at the stats for 2020 to see how much the UKs economy has shrunk compared to the EU... It's much easier to bounce back from an enormous fall than a smaller one
Ste Yorks - I'll be surprised if the majority of out voters were voting to make themselves poorer. I certainly didn't notice that being part of the propaganda 🤔

Of course it will, and probably more. The Euro is due for a post-holiday shock too.