Revealed: Macron’s France has banned use of drones to catch illegals on beaches 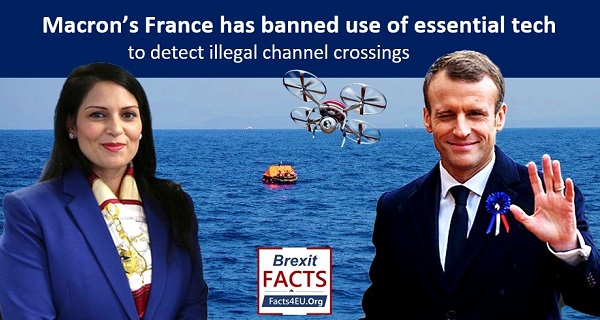 For the last two years the UK’s Home Secretary Priti Patel has been throwing UK taxpayer money at the French, for them to improve their efforts to catch people smugglers and stop illegal migrants from crossing the English Channel in ever-increasing numbers.

Today, Facts4EU.Org reveals how an official French state agency has stopped the use of one of the most effective technologies available to patrol miles of French beaches – drones.

On 20 July 2021 the British and French governments published a joint statement from Priti Patel, UK Home Secretary, and Gérald Darmanin, French Ministre de l’Intérieur. In their signed statement they promised to:-

“deploy more wide-area surveillance technology and vehicles to further improve coverage of the coast of France and thus prevent crossing attempts, including via effective deployment of aerial surveillance” 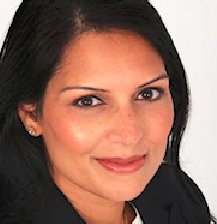 There’s just one problem, Home Secretary
– since January a French law has prohibited the use of aerial drones

While the UK is using the latest technology available, and offering it to France, everything is grounded across the English Channel. With hundreds of miles of coastline to patrol, the French have long complained that theirs is an impossible task. They simply did not have the numbers of officers, they said.

In response, Priti Patel threw a further €62.7m (£54m GBP) at France last month, to double police numbers along the French coast and for the “effective deployment of aerial surveillance”.

We can only be charitable to the Home Secretary and assume that her French counterpart did not tell her that an official French agency has banned the use of drones by law enforcement services in France. This edict has been in place since May last year and was renewed in stronger terms on 12 January 2021.

It was the department of Priti Patel’s counterpart that was officially sanctioned and ordered to stop all drone flights. This official sanction applies to the agencies of Monsieur Darmanin’s own Interior Ministry – including the police and Gendarmerie who patrol the coast.

In France there is a privacy agency with state powers, called the “Commission Nationale de l'Informatique et des Libertés (CNIL). This agency operates under statutory powers granted by French law in 1978.

In May last year, court cases started over the use of drones by French police in monitoring people for violating Coronavirus laws banning the free movement of people within France. The CNIL acted then to order drone use be stopped by law enforcement. Further actions followed, when it became clear that French police were using drones to log people taking part in anti-lockdown demonstrations.

“for having unlawfully used drones equipped with cameras, in particular to monitor compliance with containment measures. It instructs the ministry to cease all drone flights until a regulatory framework authorizes it.”

- Drones: the CNIL sanctions the Ministry of the Interior, announced 14 Jan 2021, Paris (Translated by Facts4EU.Org)

This all-encompassing edict applies to all drones, including those on the northern French coast

It is essential to note that this edict applied across the board, not only for certain uses of drones such as Coronavirus ‘containment’ measures. This ban affects the police and Gendarmerie forces in the coastal areas of northern France, where drones are an essential tool to maximise the efficiency of law enforcement to catch people smugglers and illegal migrants attempting to cross the English Channel.

“This sanction and the accompanying injunction concern the use of drones by all law enforcement agencies as soon as they act under the authority of the ministry, whether they are police services or the gendarmerie, on the whole of the territory, and whatever the objectives pursued.”

Is it possible for Macron to make an immediate exemption for drone use on the French coast?

Facts4EU.Org has read the pronouncements and the official legal measures from France’s data protection and liberties agency, CNIL. They made it clear that all they need is a “regulatory framework” to make it legal. President Macron could declare a corridor, say 25km south and 100km north from the Channel coast, where drones will be permitted for the sole purpose of detecting people smugglers and illegal migrants.

In light of the Gendarmerie’s current protestations about insufficient manpower, this would dramatically improve their ability to prevent the mass of small boat embarcations we are currently seeing on their arrival on the beaches of southern Britain.

It only requires the will to do this and the results would be very rapid. As it is, we doubt the political will is there in France to manage its northern border, for reasons which relate to animosity over Brexit.

President Macron, you could act. With the numbers of illegals departing French shores starting to get close to 1,000 on peak days, this is urgent. Follow it up with legislation in the French parliament too, because currently French law enforcement and security services have no means of tracking terrorists by aerial surveillance.

We completely agree that French law enforcement agencies should not have the right to monitor the French population by use of drones for other reasons, but along the northern French coast you could act now. And we are certain that the French police and intelligence agencies are now desperate to be able to use aerial surveillance of serious terrorist suspects.

Droning on, or 'drones off'?

French people will testify to the fact that President Macron has been known to drone on. In some cases his televised Presidential announcements have lasted almost an hour. In this case we fear that 'drones off' is a more accurate description of current French law. Let's hope he puts this right with some speed.

Priti Poor is as much to blame as Macron for accepting any in the first place and not sending them straight back. Now we are been told we need to dig deep and do our bit for those coming from Afghanistan despite already having them turning up banned from flights and no paperwork. Tories have turned themselves into a massively ineffective Green party.

The UK being punished for leaving the club. One can only hope Priti has a cunning plan.

Yet we keep giving (giving not paying as we get nothing in return) them £m’s!

Surely this cant be true , it's the most obvious way to detect people

Of course he's banned them. He doesn't want them caught. He wants as many as possible to cross the channel, gets rid of them from France's shores. Heinous man, can't wait for Le Penne to take his place!

The gross incompetence of our naive politicians leaves a lot to be desired.You should have paid the French quarterly in arrears dependant on results,with bonuses for no crossings !

The UK should not depend on France for control over its sovereign borders.

5 Eleanor baxter is spot on.
The french have always delighted at getting one over the English, They will laugh and giggle behind our backs while taking our money for nothing.
They obviously want as many immigrants as possible to get across to England and give us further problems.
The only way to stop this is for the UK border force and Royal navy to patrol the half way line at sea and send every boat back.
Litterally put a net over the people on the boats and tow them back to France.
Strong action for strong results.
Of course this will never happen in a month of Sunday's as our country and most of the Western world is lost in an oblivion of woke madness.
Certainly crazy times we are living in.

bring back Arthur Lowe and dads army for the coast of Britain, I feel sure they could sort out the hoards of invading fuzzywuzzies better than pritti useless patel and her boarder farce