Remember when you were told our exports to the EU would fall off a cliff if you voted Leave? 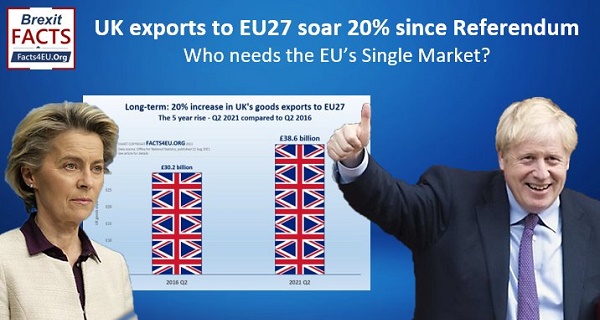 An exclusive Facts4EU.Org report, debunking yet another Project Fear myth

Articles about trade can sometimes appear a little dull for many people. We promise you that this one isn’t.

Yesterday (12 Aug 2021) the Office for National Statistics released its latest trade figures, for the second quarter of this year, to end-June. Facts4EU.Org’s analysis shows that UK exports to the EU have rebounded by 31.5% since the first quarter of the year, and that exports to the EU are 20% higher than they were five years ago, just before the EU Referendum.

A few months ago the first quarter’s trade figures for the United Kingdom brought all the Remainer-Rejoiners out in their thousands, seemingly rejoicing in the fact that the UK’s sales to the EU had dropped dramatically (by almost 20%) since the UK formally left the EU on 31 December 2020. “See,” they said, “we told you that Brexit would be an economic disaster.”

At the time we pointed out two things. Firstly, some EU companies would have stocked up prior to the UK’s departure, in case of difficulties in obtaining supplies. Secondly, we said that the EU’s astonishing actions in making life as difficult as possible for UK goods to enter the EU would have a short-term effect on the UK’s export figures.

1. The huge increase in UK goods sales to the EU compared to the first quarter of the year 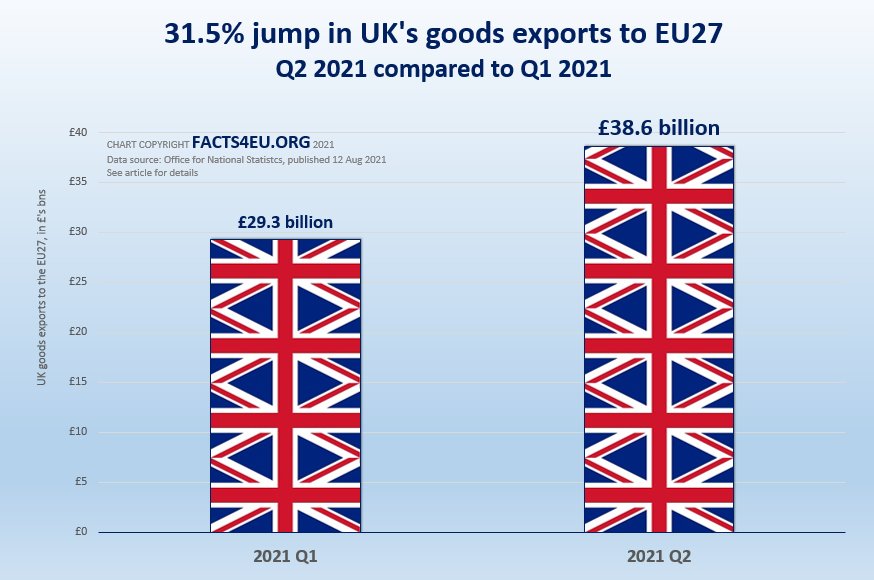 2. Long-term - The large increase in UK sales to the EU since just before the EU Referendum 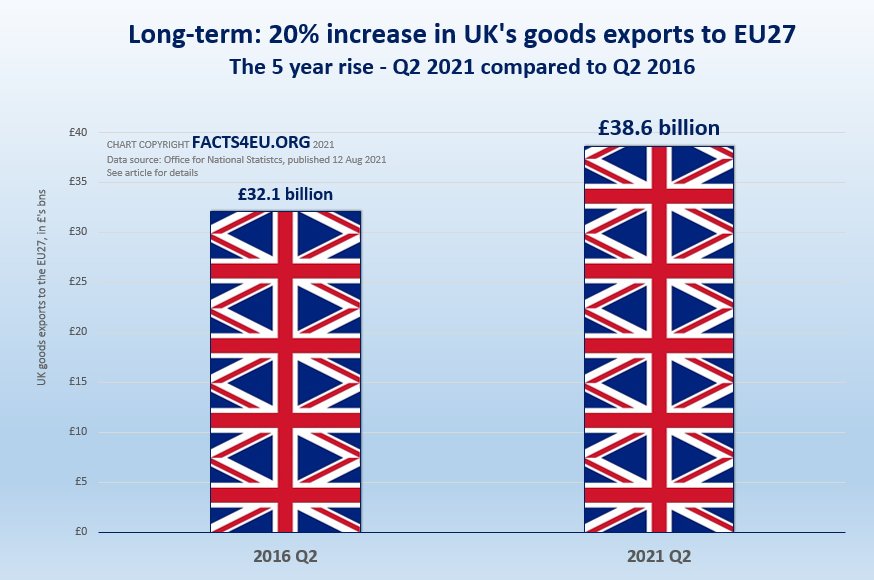 Compare this to the pro-EU propaganda before the Referendum

For the benefit of our international readers, it is impossible to overstate the level of state-sponsored pro-EU propaganda to which the British public was subjected before the EU Referendum.

Here is David Cameron, then British Prime Minister, making a major speech at the Vauxhall car plant in March 2016, just three months before the Referendum. In it he set out his case for remaining in the EU and very specifically within the EU’s Single Market. If the UK voted Leave he said:

“It means pressure on the pound sterling. It means jobs being lost. It means mortgage rates might rise. It means businesses closing. It means hardworking people losing their livelihoods.”

Readers can watch the full speech below.

And here is a prominent member of the Remain campaign, Chuka Umunna, former Labour MP, still trying to overturn the largest electoral mandate in British history, in 2018:

Brexit was never about trade, but...

For the vast majority of Leave voters, leaving the EU’s sclerotic empire was never about trade. It was about having control again, and regaining our status as a free, independent, and democratic country. Many of us would have taken an economic hit, if it meant escaping from the clutches of the unelected and autocratic bureaucrats of Brussels.

In the end, Brexit Britain’s economic performance has been excellent, as we predicted all along.

Many Remain voters shared (and still share) the same values, but were intimidated into voting Remain because of the scare tactics of a state-sponsored propaganda campaign, pumping out malicious and deeply false arguments and ‘official forecasts’ of Armageddon.

This is good news

Facts4EU.Org’s report today puts yet another nail in the coffin of the doomsayers and pro-EU propagandists who perpetrated a malign, dispiriting, and apocalyptic campaign, portraying a defeated, insignificant country facing a bleak non-EU future.

Many challenges still lie ahead, principally because of the punishment beating which the EU seems determined to inflict on the United Kingdom for daring to leave. In the coming days we hope to publish an exclusive account of the experiences of one British businessman in Spain, attempting to import goods from the UK.

None of the negativism of the EU and its propagandists can detract, however, from the latest trade figures. A 31.5% jump in quarter-to-quarter exports and a long-term 20% increase in UK exports since just before the Referendum.

Now we wonder when the BBC will cover this great news?

[ Sources: Office for National Statistics | UK Government archive of speeches ] Politicians and journalists can contact us for details, as ever.

Northern Ireland must get out of the single market its what we voted for to leave the customs Union and the single.

We never needed the EU in the first place.. They always needed us

Just reading an article in the Brussels Times, to find that EU and UK export figures differ by 40% !!
""European and British administrations use different methodologies to measure cross-border trade, which could explain the different results.""
w w w .brussels times .com / news / 181288/brexit -effect -felt -as -eu -imports -from -uk -slump -by -almost -20/
How can they be so different?

"soar 20% since Referendum". Idiotic item. We were in the EU most of that time.

4. Don,
At last - common sense prevails. Great "research" guys, or is it just a guy in a bedroom in Blackpool? Probably.