Is the EU shooting itself in the foot in order to punish Brexit Britain?

Post-Brexit EU exports to UK fell by 2.7 times more than its exports to rest of world 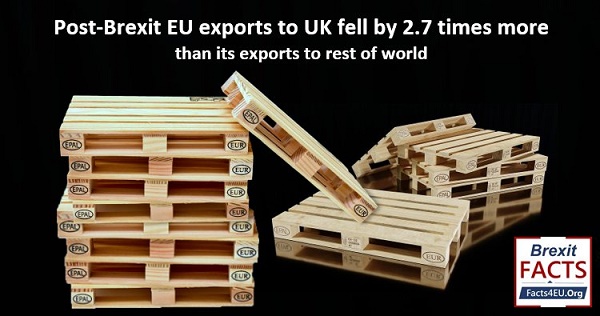 Facts4EU.Org has analysed the latest official international trade figures from the EU’s statistics agency, and the results should give concern to the EU’s major exporting companies and countries.

The results are startling.

Stripping out the Coronavirus and the Brexit stockpiling effects

It is important to stress that COVID-19 has reduced most countries’ exports and this is certainly true for almost all EU countries, as it is for the UK. So with exports falling across the board, the important comparisons are these: 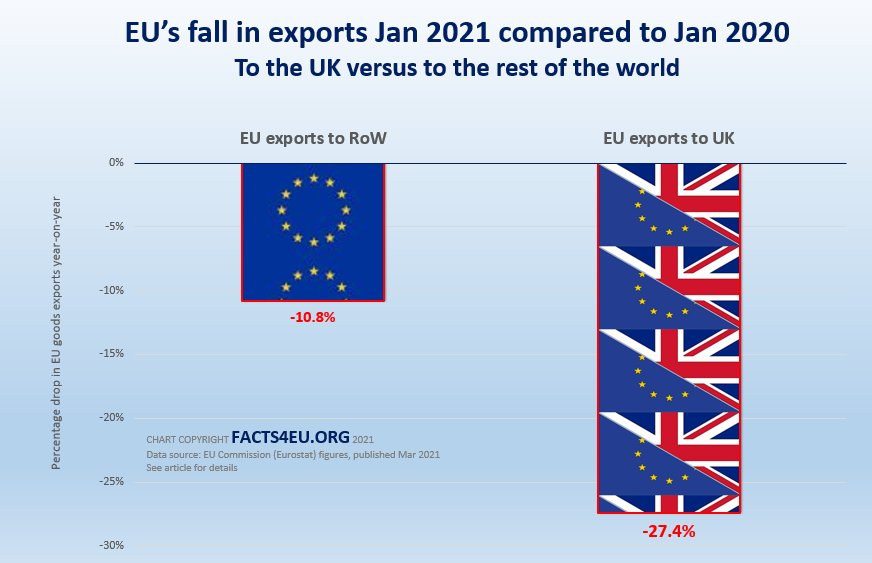 2. How much effect did pre-Brexit stockpiling have?

The ONS suggests that many UK companies bought more - in a stockpiling exercise - from the EU in the period up to the UK finally exiting the European Union on 31 December 2020. We therefore looked at the data to see if the dramatic fall in the EU’s latest export figures for January could be explained by UK companies stockpiling at the end of last year and then buying less in January. 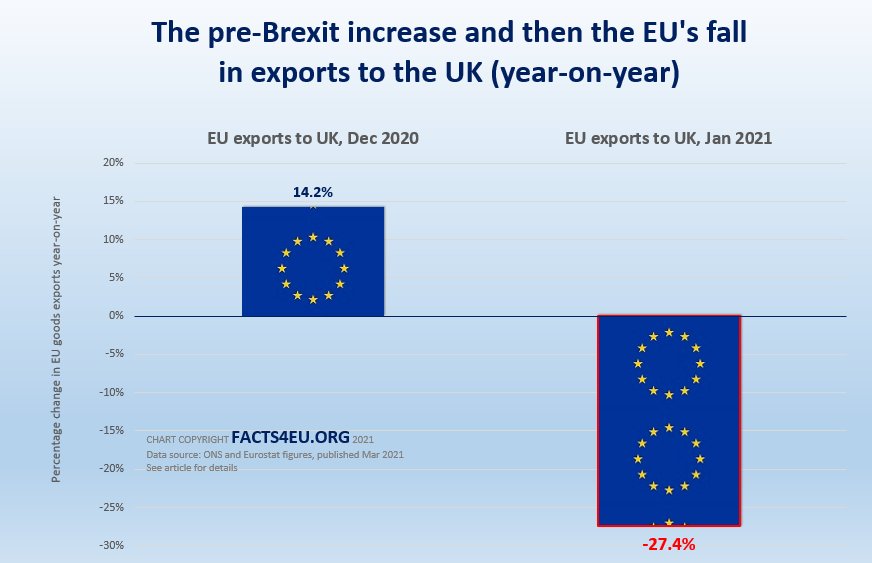 In December there was a 14.2% year-on-year increase in imports from the EU. This does indeed suggest a 'pre-Brexit stockpiling' effect. However the fall in imports from the EU when the UK exited the EU in January this year was almost double this figure, at -27.4%. One month's figures should of course always be treated with caution and it remains to be seen whether a trend will develop.

The last six years since the EU Referendum has seen the EU act in an increasingly hostile manner towards the United Kingdom. On a regular basis Facts4EU.Org has documented the dictatorial and vitriolic behaviour from Brussels. Never has this been more apparent than in the EU’s debacle over its disastrous COVID-19 vaccine performance.

With the US-German Pfizer vaccine reliant on the UK’s exports to EU-based factories of the essential ingredients to make the vaccine, what does the EU say? “We export to the UK but the UK exports nothing back.” No mention of all the vaccine components exported from the UK to the EU.

The unelected EU Commission has imposed an export ban called an “Implementing Regulation” which has not even been agreed by the EU Council leaders of the 27 countries. Has the UK Government reciprocated by banning the export to the EU of the essential vaccine ingredients needed by EU-based pharma companies in order to make the vaccines there? No.

Without the UK’s exports to the EU, the EU’s already lamentable vaccination performance would sink yet further.

In no way can the EU claim any high ground in this mess. They have been exposed, red in tooth in claw for the whole world to see.

Does Brussels really want to see UK companies and consumers buy more from “anyone but the EU”?

Turning to the fall in the EU’s exports to the UK compared to the rest of the world, it would not be a surprise to us if there were not a significant shift in British public opinion when it comes to buying products made in the EU.

Our sense from readers' emails is that the public still feel warmly towards the citizens in the countries involved in the sclerotic EU enterprise. “Love Europe, hate the EU” is still a common refrain. The problem lies with the unelected bureaucrats in Brussels, and certain nationalist leaders of EU countries such as Monsieur Macron of France.

It would be a great shame if the citizens of the EU27 countries suffer job losses and hardship as a result of these politicians and unelected and extremist ideologues, but if this appalling behaviour continues any longer we suspect that Brexit Britain will turn even faster to its friends around the world for its products, in preference to those from the EU.

[ Sources: Eurostat - official EU statistics agency | UK Office for National Statistics ] Politicians and journalists can contact us for details, as ever.

Normal people should always reject totalitarian regimes, we can now see where the EU is heading, with its unelected unaccountable 'leaders' immune from prosecution !!, any historians see the similarities to 1930's germany?

On the positive side, another year of this, exacerbated by the starkly worsening covid situation on the continent and all the effects of that yet to be felt, I suspect we will begin to see very real change in 2022 - probably beginning with the French elections in April next year. It wouldn't surprise me at all to see a serious, rising and ongoing backlash against the ruling elite within their own governments as well as the EU organisation as a whole. There is a limit to what ordinary people will stand for, and that limit is about to be sorely tested. Just as in Britain in 2016, many will be saying Enough is Enough. Mark my words.

No. 1: You don't need to go across the Channel to find 'totalitarian regimes'. We have one here in Westminster.

Looks like the EU trade surplus of €80 billion from the U.K. is about to plummet

The way they've treated us, I believe Brits are turning away from EU products, wine, cheese, vegetables, etc.
I only buy English tomatoes now from Morrison's. Lovely flavour and nearly the same price.

Are you still bangin' on about this hurting them more than us? I can honestly say I've never encountered such. Truly, Brexiteers are incapable of learning. The entire fishing industry is in a landfill thanks to you & yet here you are - doubling down while a few Tories turn the country into a fascist, corrupt state. The government you elect is the government you deserve. I have another passport. Hurt yourselves some more.
5.Brits are not turning away because of some imagined slight. You chose higher prices. Everyone with an IQ above 100 told you that this would happen, yet you blame the EU. Poor Scotland - tethered to a cult.

6. When you reach a double-digit IQ, raise your hand & let an adult know.
You can't just blurt out confessions when grown ups are talking.
We already know that you are extremely dull. You are a Brexiteer after all.
.

Only themselves to blame. People can see how badly EU are behaving towards us in particular over vaccines. They are showing their anger by buying British where possible over EU goods. When not possible are looking for commonwealth goods instead, anything but EU goods. You can't expect to keep your customers when you treat them so badly in other ways. If the govt won't get tough with EU then the people will!