By every measure, the UK is leading the EU by a long way 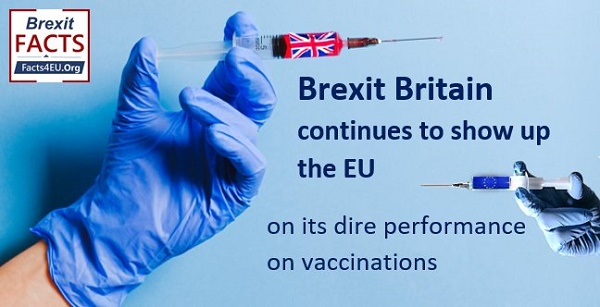 Remainer-Rejoiners and the BBC seem unnaturally quiet about this, so Facts4EU.Org will not be

Yesterday another milestone was reached. 10 million people in the UK are now fully vaccinated against Covid-19. This is by far the largest number of any EU country. In addition, the total of all vaccine doses administered as a proportion of the population exceeds that of every EU country and dramatically exceeds the EU average.

Last year when the UK announced it would not be participating in the EU’s vaccination programme, Remainer-Rejoiners threw themselves at their pro-EU supporters in the British press, eager to claim imminent disaster was awaiting the newly-independent United Kingdom.

Fortunately for the British people, the Europhile doom-mongers were once again proved wrong, as they have been on all their predictions and threats with which they attempted to intimidate voters before and after the EU Referendum. 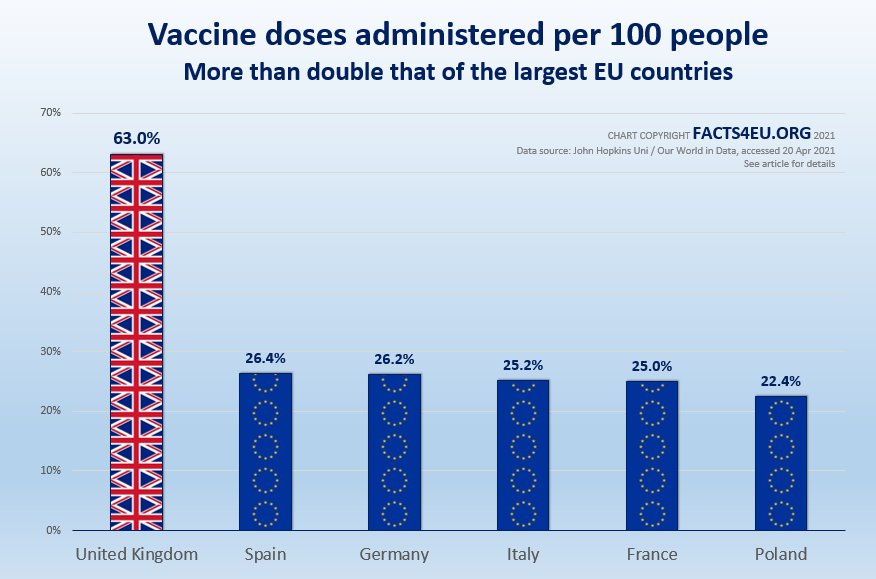 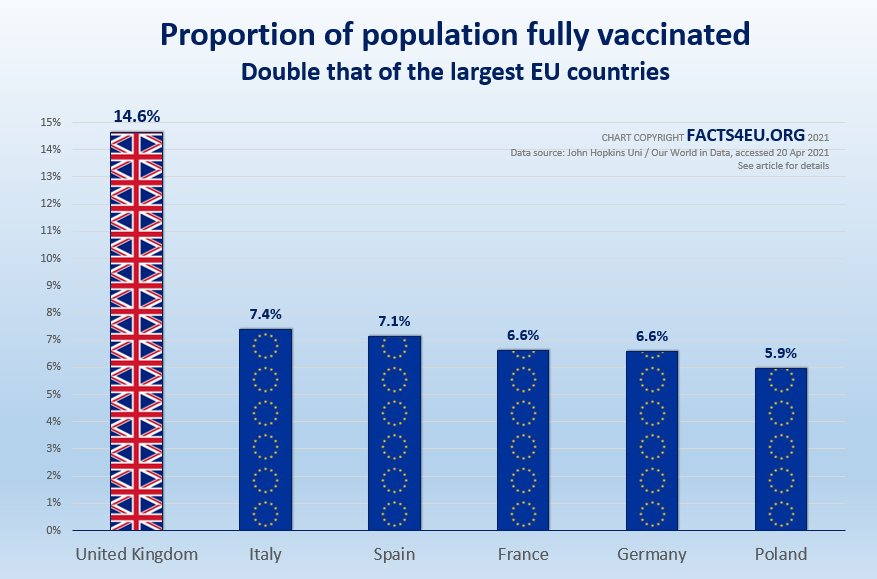 Meanwhile the EU continues to attempt to manipulate the public

“And the good news is: Vaccination is picking up speed across Europe!”

Months into this, and the latest figures above might suggest that the EU’s speed is increasing from that of a sluggish French escargot to the pace of a tortoise.

There are arguments to be made about vaccines, but we are unable to go there. Regardless of those debates however, the simple fact is that governments around the world are engaged in a race to vaccinate as many of their people as they possibly can. Countries are being compared on this basis, in newspapers in every country.

Imagine the BBC if the situation had been reversed

Imagine for a minute if the above situation had been the reverse of the reality we have shown. If the UK’s vaccination programme had lagged behind the EU’s by as much as the EU’s now lags behind the UK’s, we have little doubt that for months the BBC would have been producing these charts daily.

As it is, Brexit Britain has shown itself to be nimbler and much more effective than the cumbersome and inefficient machine which wishes to run all aspects of life for the EU27’s 434 million inhabitants. Bureaucratic Brussels hasn’t just failed, it has failed on a monumental scale.

And all of this from an organisation which claimed last week to be the largest producer of vaccines in the world. The reality of course is that “the EU” hasn’t produced a single vaccine. Private companies have. And yet “the EU” is a long way behind the UK and the USA in its vaccination programme.

In providing this official information, Facts4EU.Org is not “gloating” – which seems to be the only response from Remainer-Rejoiners – we are simply pointing out the facts. And the facts show that an independent United Kingdom has outperformed the EU by a long margin in its vaccination programme.

[ Sources: John Hopkins University | Our World in Data | EU Commission ] Politicians and journalists can contact us for details, as ever.

So many sayings could apply to this Vaccination Programme: Fools rush in Where Angels Fear to Tread. Or, remember one of Aesop's Fables: The Hare and the Tortoise - the hare got so cocky he would beat the tortoise to the finishing line that he went for a kip. Only, the steady and slow tortoise lumbered past him and won! Extreme adverse reactions as well as deaths possibly linked to recent Covid injections,,will determine whether people continue to want the 'jab'. Informed Consent, a safeguard for us all to read about the effects of any vaccination programme, does not happen until after the conclusion of the Vaccine Trials. Are those queuing up for a jab being told this? We are the guinea pigs right now as trials have another year or two to run.

1. Or how about simply "Fortune favours the brave". I prefer to look at the actual facts: tens of thousands of lives have already been saved in the UK alone, and countless more much better protected from hospitalisation and serious long-term illness. Sure, there is a risk with all medicines, and vaccines - especially new ones, arguably - are no exception, but the alternative is most definitely no bed of roses. India thought they'd licked it and had adopted a casual "wait & see" policy, and look what's happening there right now. The situation is horendous and is going to go off the scale without mass vaccinations. Honestly, I would tell you where to shove your cowardly anti-vaxx message but my own, far more important and accurate one, might suffer censorship.

More lies by an opaquely funded website that doesn’t actually do facts.
EU countries started vaccinating about 3-4 weeks later than the UK, and they had severe problems for the first month because of the failure of British company AstraZeneca to deliver what it promised. So that initially left EU countries around 7 weeks behind the UK.
For many of them it didn’t really matter as most of them have few problems with Covid anyway. Countries like Denmark, Finland, Malta, Estonia, Cyprus suffer a couple of deaths a day. We are still not at that level.
But after a slow start EU countries are catching fast and we will almost certainly not be the first to complete our vaccination programme. Malta, Hungary and a number of others are all likely to finish before us.
And the EU has managed to do this whilst still exporting 100 million doses to the rest of the world. Half of the doses used in the UK came from Europe. In contrast the US and UK have exported nothing. Well, the UK have some to its tax havens but that doesn’t count.
The one chart we definitively do top is the number of deaths. The worst in Europe. Brought to you by a Brexit government.

Oh the bitter remoaners still can't understand that contracts count, and the UK had a better contract with AZ than the eurocracy. Why ? Because the eurocracy thought they were smart but found they were incompetent, then arrogantly tried to hide their failure by blaming others .. I.e the UK.
We get criticised for high levels of covid related deaths with little recognition that at least we record our statistics reliably and openly.
Look at current covid stats, the UK is doing fine despite being a port of call for all nations in the world with all the covid infection problems that presents.

Germans travelling to rJohn Smithussia to pay for jabs

Post 3 is the only one that makes sense and sticks out from the rest. This attitude we have adopted from the US will do us no favours - me. me. me

3. Buster, there are so many twisted distortions, half-truths and blatant lies in your comment, I really don't know where to begin. Can you really be so fanatically deluded, blind to all the genuine truths, or do you actually work for one or another EU propaganda department? If not the latter, you should apply for a job - the spin you put on simple facts would be a credit to their cause!

There are nearly a 1,000 deaths reported on the MHRNA (The UK Regulator) Yellow Card system for England and Wales. That's the official Government website to report adverse reactions to the Covid vaccines. So why did PM Johnson yesterday, when questioned on TV ,say that they did not possess figures for deaths from taking the vaccines, and there would probably be only a few, or none? Secondly, the WHO IFR (Infection Fatality Rate) for this Covid 19 'pandemic' worldwide is only 0.15%. Why are any vaccines needed?

This weekend, yours truly said he'll be getting rid of the "ludicrous barriers" to trade between GB & NI. How, one wonders? By rejoining?
Treaties have been signed - unread & WTO terms are far from appealing. As it is, aside from a return to common sense, there is nothing to be done but gri & hope for the best. Which is probably what the Tories had hoped for. They miscalculated that the EU would end up in a position that they'd be forced to abandon or adjust - even if the law was on their side.There is also no mention yet on equivalence.
Johnson seems to have lost appetite to speak about this, so much so he leapt at the chance to speak about football instead. The expensive "situation room" he built to address the nation, seems he no longer wants to spend time in. My guess is, he'll play avoidance & Starmer will allow him to, until things come to a point where the Tories are forced to read the agreement they signed & TGFA. As late as Jan. 2019, Raab admitted to not having read TGFA - this is what we're dealing with. He's not alone in not knowing pivotal treaties - Immigration Minister Caroline Nokes admitted to the same upon questioning. One wonders if Johnson has read it yet.
What seemed like a car crash in slow-mo, is turning out to be an atom smash eclipsed only by the ignorance causing it.