It's the EU that has broken the Good Friday Agreement, not the UK

Facts4EU.Org summarises the uncomfortable truth for the EU and for US Democrats crying foul 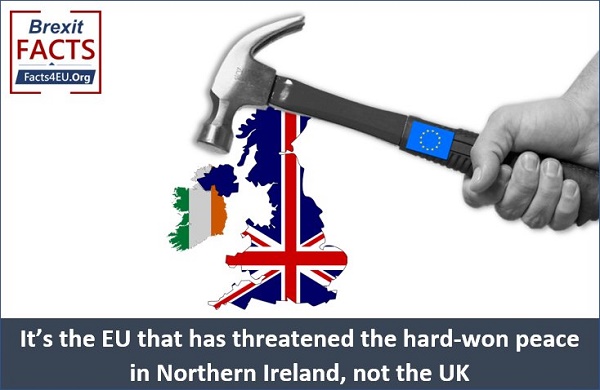 A two-part Facts4EU.Org special on Northern Ireland and the Good Friday Agreement

Yesterday the Speaker of the US House of Representatives, influential Democrat Nancy Pelosi, launched an attack on the UK over the Government’s moves to protect the Good Friday Agreement between Northern Ireland and the Republic of Ireland.

We suggest that Ms Pelosi’s statement betrays a complete lack of understanding of the facts, and of who is at fault.

The Good Friday Agreement is the bedrock of peace in Northern Ireland. If the U.K. violates its international agreements & Brexit undermines the Good Friday accord, there will be absolutely no chance of a U.S.-U.K. trade agreement passing the Congress. https://t.co/n7E4GHTJcI

Part 1: The EU’s Withdrawal Treaty breaks the terms of the Good Friday Agreement

US House of Representatives Speaker Pelosi : “No chance” of UK-US trade deal
Brexit Facts4EU.Org presents some facts which Ms Pelosi does not seem to be aware of

The EU’s Withdrawal Treaty requires the imposition of tariffs between the UK and Northern Ireland. As the distinguished barrister and EU law specialist Martin Howe wrote yesterday in [paywall] the Daily Telegraph:

“International law does not justify a later treaty to which these community representatives are not parties being used to over-ride the rights they enjoy under the earlier treaty, especially where it involves over-riding such a fundamental right as the right to self determination of the people of NI.”

“The EU has a long history of disregarding adverse rulings by WTO disputes bodies, for example on subsidies to Airbus. The ECJ itself in a case called Portugal v Council decided that it should not give any direct effect to the WTO Agreements under EU law, because that would force compliance with the WTO obligations and so have the consequence of depriving the EU’s legislative or executive organs of the possibility entering into negotiated arrangements.”

“The Protocol sets out the clear principle that NI is part of the customs territory of the UK, so goods should be allowed to flow from Great Britain to NI without tariffs. There are provisions for the UK authorities to levy EU tariffs on goods which are “at risk” of crossing the open border into the EU. The problem is that the circumstances in which goods are to be treated as “at risk” are not defined in the Protocol, and joint agreement is needed with the EU on the rules which would define this.”

Part 2 (tomorrow): The EU has deliberately manufactured a problem which barely exists

In tomorrow’s (Saturday) edition of Facts4EU.Org we will publish devastating testimonies from senior figures in the official bodies running the Republic of Ireland’s and UK's Customs and Excise, together with a damning quotation from the EU officials revealing how the EU negotiated with the UK.

The harsh evidence we shall publish makes clear the agendas of the Irish Government and the EU, over Northern Ireland and the Good Friday Agreement.

We will also show that the entire issue of the Northern Ireland border has been manufactured by the EU over an amount of trade so tiny as to be irrelevant to them.

It is essential that the truth about the whole issue of the Northern Ireland border is in the public domain. We find it simply extraordinary that the UK Government seems unable to communicate this.

Whilst some of this fiasco may be down to the usual Remainer civil servants being unwilling to present any case which shows the EU in a bad light, this cannot explain the complete absence of any debunking of some of the statements from the EU and by some UK Remainer politicians who have never accepted the democratic result of the UK's EU Referendum and should know better. These statements are now influencing opinion around the world on an hourly basis.

The Government is now materially damaging the UK’s economic prospects

For years we have publicly lamented the appalling performance of the Government’s various communications departments, in ever more strident terms. We even offered to assist them, if they needed facts to back up Government statements and press releases.

Now we must go further. It is wholly unacceptable to read that the Speaker of the House of Representatives has taken a position – from which she will find it impossible to row back – that no UK-US trade deal will be approved by Congress if the UK Government proceeds with its plans to protect the integrity of the Union and the integrity of the Good Friday Agreement.

To be clear, Facts4EU.Org were the first to publish a condemnation of the draft Withdrawal Agreement when it first surfaced, and we condemned it repeatedly all the way up to the slightly revised version being signed by Boris Johnson in January.

We are where we are, but the abomination that is the Withdrawal Agreement does not preclude the most strenuous efforts from being made to clean it up so that it does not repudiate the tortuous peace process which led to the Good Friday Agreement.

Effective communication is a duty of Government to its people

A duty of Government is to communicate its policies and actions to its people, and to the wider world. The Johnson Government is failing abysmally in this regard. We strongly suggest that No.10 bring in outside help. We and other respected Brexit organisations stand ready to respond.

In Saturday’s edition of Facts4EU.Org we will publish the second part of this summary on Northern Ireland and the Good Friday Agreement. You do NOT want to miss the devastating evidence we present against the EU.

Finally, we are struggling and we need your help. We have far more to do in researching, publishing, campaigning and lobbying Parliament than we have in terms of the financial resources to fulfil these tasks. We rely 100% on public donations from readers like you. Unlike the Remain camp, we do not have foreign billionaires to subsidise our work.

If you believe in a fully-free, independent, and sovereign United Kingdom, please make a donation now. It’s quick, secure, and confidential, and you can use one of the links below. And you will receive a personal, friendly ‘thank you’ from a member of our team within 24 hours. Thank you so much if you can help to keep us going in these critical months ahead.

[ Sources: The Good Friday Agreement | The Withdrawal Agreement Martin Howe, Chairman, Lawyers for Britain ] Politicians and journalists can contact us for details, as ever.

You could add this to the list of the EU NOT ADHERING TO THE WITHDRAWAL AGREEMENT AS This is definitely NOT the Idea Of BEST ENDEAVOURS.

What a farce.
Brussels has been spoofed into playing Russian Roulette.
They are pointing the pistol at Boris in the belief they must prevent the UK legislating for the end of transition.
The EU has a problem, they dare not pull the trigger. They would be seen as the party that first ended negotiations.
What evidence would they take to Court and to which Court. Out of the EU the ECJ has no jursidiction

Have the journalists been stirring the past PM's (John Major etc.) into life again.
The brouhaha in the Lord's will be put down, and exhausted, calm will return, having claimed their fee.

Why does the House of Lords not understand this ? It is quite apparent EU at fault

They all understand it but don't want things to change.
This goes to show how damaging the WA/PD are to the UK. The more they shout about breaking a treaty, The more we believe they have ulterior motives.(of course they do) stupid barnier telling the cameras its about trust.
The EU deserve a lot worse.
I wish no 10 would start telling it like it is on tv,But the media wouldn't allow that.

Breaking international law & breaching trust! That from the EU about us!!! Pot calling kettle black springs into mind! We all know that all the EU wants is to punish,crush & humiliate us,not do any deal,along with the assistance of the vast majority of the House's of Lords & Commons. The UK people have the backbone to walk away & put an end this whole pathetic saga & corrupt regime that is the EU. Do this government? I sincerely hope so! The selfish elitists who consider themselves above us peasants who believe in the democratic processes only have any interest in filling up their own already bulging pockets & bank accounts & to Hell with the common person! Would the EU & whinging Remoaners consider it 'breaking international law & breaching trust' if they got their way & Brexit got scrapped?! Gross double standards of which we have all become all too aware of! WTO is what's required! End this... honestly,I can't type what I would like to here to describe it but,I'm quite sure it's understood what I mean!

FFS.
Keep driving off the cliff.The UK reputation is in tatters.
Who exactly Are you fools going trade with?
Forget the EU/US, and who would trust the UK now?
You will own the mess that is coming..

The punch drunk remainers are entering the ring again.
Gina Miller is reported talking to Peston
She has not engaged her legal team as yet and sounds quite confused on the legal aspect.
"But say that's what it is, then the EU can have meetings but until the 1st of January, until we have broken those laws, they can then trigger the dispute settlement mechanism in the Withdrawal Act."
"And we can end up with financial sanctions against us, we can have legal action against us.
"But until that moment, we don't know. So we have to watch and see what happens."
Like everyone else she is jumping to conclusions based on the Brandon-Lewis gaffe

8 Oldham Pole - sorry but if you don't understand that Biden/Pelosi and the EU are like rats in a sack, then you have a lot to learn. In fact I would go further the US's reputation is in tatters because of the so-called democrats and ours by the marxists/socialists.