Ahead of the PM’s speech today, we show what Oxford University’s medical evidence experts say

On Monday 21 September 2020, the Government’s Chief Medical Adviser and Chief Scientific Adviser held a press conference where they co-presented a chart showing the possible growth of COVID-19 ‘cases’ (positive test results). Whilst they carefully stated that the chart was not a prediction, merely a projection, the message was clear.

Here was the Government’s Chief Scientific Adviser on national television, three weeks ago

“At the moment we think the epidemic is doubling roughly every seven days.

“If, and that's quite a big if, but if that continues unabated, and this grows, doubling every seven days... if that continued you would end up with something like 50,000 cases in the middle of October per day.” 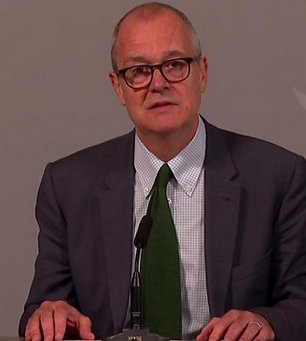 Major lockdowns to be announced by Boris Johnson today

It has been widely trailed in all media that today the Prime Minister will announce a major intensification of lockdowns around the country, particularly in the north.

Ahead of this, we present the latest findings from experts at the Oxford University Centre for Evidence-Based Medicine (CEBM). 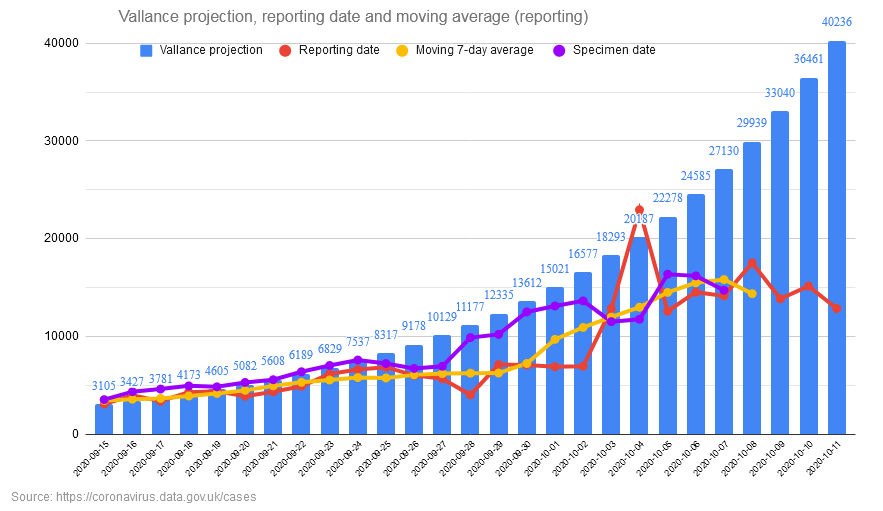 Disclaimer by the originators: the chart has not been peer-reviewed; it should not replace individual clinical judgement, and the sources cited should be checked.

The data on the above chart was updated by the Centre for Evidence-Based Medicine yesterday, Sunday 11 October. The number of ‘cases’ (positive test results) yesterday was 12,872. The previous Sunday it was 11,776. That’s an increase of 9.3%.

In the ‘example scenario’ presented by Sir Patrick Vallance and Professor Chris Whitty, 49,000 ‘cases’ per day were projected by tomorrow, 13 October 2020.

As the world’s most prolific researchers and publishers of Brexit facts since before the EU Referendum, we can perhaps claim some expertise on the subject of the EU and Brexit.

We have no such expertise in medicine. We can, however, recognise a ‘dodgy dossier’ when we see one.

And we believe in facts informing debate, which is why we thought that readers might want to see an update on the actual numbers, ahead of whatever is announced today.

For the avoidance of doubt, any views expressed or implied are not a substitute for professional medical advice.

Tomorrow we will be publishing an important article about Brexit and the trade opportunities which await a free, independent, and sovereign United Kingdom.

[ Sources: Oxford University Centre for Evidence-Based Medicine | BBC ] Politicians and journalists can contact us for details, as ever.

Thank you.
Important to base policy on facts - and not on mumbo-jumbo, superstition and witchcraft.

In addition how many of those alleged 12,872 confirmed cases are false positives?

Undoubtedly an emotive subject, the medical profession are divided, the advice givers are divided, the civil servants are divided, the public is divided and make no wonder. The data collected is proved useless time after time, thousands added or subtracted, seemingly at will. Due to this the government looks to be a shambles. Not only this but the draconian measures instigated are Ill thought out, with MP's widely ignoring their own advice.
Tests that detect anything vaguely related, people in close contact not being infected, people complying with all the instructions being infected. Countries with minimal controls doing well, countries with harsh restrictions doing very much worse.
How are the public supposed to make sense of any of the MSM pronouncements?

The method isn't working and deceptive data and false-positive tests its all an exaggerated lie causing untold loss and death by other means. People will not trust Boris anymore.

Unfortunately for La Sturgeon, there were no deaths from Covid-19 in Scotland yesterday.

Coronavirus only has ever been recorded in science as having one wave. There is no record of a second wave of any coronavirus. The reason we are seeing more now was something many of us predicted back in April. Lockdowns reduce the immunity and resistance of people in Lockdown and on release they are much more likely to get infected than they were before they were locked down. All lockdown has done is delay the progression of the first wave of the same virus. The government are treating the virus as if it was herds of sheep which is madness. Herd immunity is the only way to deal with viruses. Vaccines are unreliable. 86% of flu vaccines failed in 2017/18, 30% failed last year. The very vulnerable and weak need to be isolated, not the whole country. That has never been done in the history of man. Leprosy, Typhoid, Cholera, Smallpox, TB have always been treated by isolating the ill, not the healthy. Until the 60's we had "fever" hospitals used to isolate people with highly infectious diseases and even in biblical times we had colonies for people with infectious deadly diseases. LOCKDOWN IS A RIDICULOUS UNSCIENTIFIC POLITICAL STRATEGY THAT WILL NEVER WORK. As for face masks, why did the 25 Police Officers get Covid??They had been wearing masks religiously for weeks. Obviously they don't work. I would bet that 90% of those tested positive wore masks. I see masks lying in the street, in shop doorways, in car parks, hedge rows and people use the same mask more than once, more than ten times. We will have an outbreak of mass bacterial infections which will weaken people and make them more susceptible than they were before wearing masks. MASKS DO NOT WORK AND ARE DANGEROUS.

And our glorious leader doesn’t listen to any other health professionals.....very suspicious.

Any & all viruses are potentially deadly to somebody but,not EVERYBODY! So why is this one being treated any differently? Simple! The political elite have found a way to control the mass peasantry like never before in human history & have conned a huge proportion of the populace into behaving like obedient sheep who obey every whin! All these so called 'scientific advisers,' we keep hearing about who 'advise' the politians,who were they 9-11 months ago? Nobody had heard of them now they are 'important' within their own ego's as to their better knowledge of what do & how to proceed! They are becoming household names but for all the wrong reasons! Also,big business is raking it in (pharmaceutical companies,) with the manufacturing of all the PPE,all the hand gels & petroleum companies for all the plastic barriers going up in all public premises that they are supplying ingredients to make all this plastic & the governments collect all the tax receipts in return! Covid-19 is now nothing more than a power tripping,own ego fulfilling boosting,excess profit making exercise at the expense of the people! Protect the vulnerable,by all means but,leave the rest of us alone! Stop boosting your own ego's at our expense! We, the people,will only take so much so stop pushing us around!

For those who did not let their schooling get in the way of their education, the European unions demands, and comments are absurd. This political punch and judy show is absurd. Politicians for the last 40 years have been directly responsible for the wholesale robbery of the British people, or complicit. They disgust me. No excuses. The deaths recorded due to covid do not warrant any of the measures. I considered that if you cheat the electorate you would be destroyed at the ballot box, and yet you have gone further already bailouts for hedge funds? The negative interest rates and massive asset grab that will follow from the banks? Relentless immigration from peoples that have proven themselves to be incessant pedophiles. You cannot even control Whitehall. And yet you stand upon the precipice and believe that you can rob them one more time. The British people have paid one of the highest prices on the altar of freedom. They deserve better. A pox upon all traitors.

The tiers of a clown.
There's a smile upon his face, but it's only there trying to fool the public. (Hank Cosby, Smokey Robinson & Stevie Wonder)
_
On 19th March, Covid19 was removed from the list of HCID https://www.gov.uk/guidance... It was no longer considered a deadly threat.
The 'original' lockdown was for TWO/THREE weeks to 'flatten the curve' & prevent RNHS being overwhelmed with a peak of cases & spreading the infections over a longer period.
Since the originating legislation on 25th March, there have been 456 pieces of legislation relating to the virus, all consolidating the power of the Govt(s) and removing civilians rights and freedoms.
Despite the wringing of hands & tears by many MPs at the time regarding this assault on liberty, they (apart from a handful) have done nothing to reverse the growing Stasi state. Many haven't even bothered to vote. They too, are colluding in the misrepresentation of positive PCR tests (with high rates of false positives & which cannot identify covid19 itself) as 'cases' to instil fear, whilst the hospitalisations & deaths remain low. They are & will be held equally as culpable as the Govt.
The latest 'fudge' to keep the story going is to combine flu/pneumonia with batflu.
_
Isn't it interesting that all countries seem to be following the same script, oops sorry, independently identifying & imposing the SAME disproved methods at the same time. As if in lockstep.
Isn't it interesting that economies are being deliberately destroyed just as the WEF are advertising 'the great reset'? I must say, Boris the ditch dodger's UN Agenda 2030 badge tells us what we need to know.
All being done in the name of 'science", but 'science' which cannot be questioned is NOT science. It is manipulation for power & control.
Can you see what it is yet?