Their laws? Their judges? Their territory? Our money? No. No. No. No. 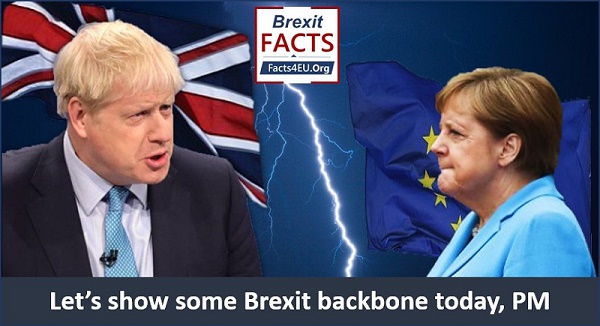 You must take back control today, Prime Minister, and walk away

Yesterday the EU Council of 27 leaders met in Brussels. Brexit was the first item on the agenda after COVID-19. In an extraordinary statement, the EU essentially told the UK to kneel to its demands. 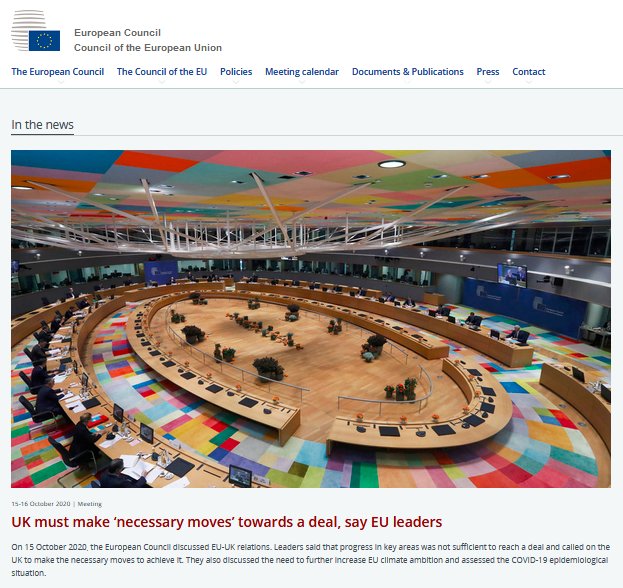 The EU Council’s statement in full

4. The European Council recalls that the transition period will end on 31 December 2020 and notes with concern that progress on the key issues of interest to the Union is still not sufficient for an agreement to be reached.

5. The European Council reaffirms the Union’s determination to have as close as possible a partnership with the United Kingdom on the basis of the negotiating directives of 25 February 2020, while respecting the previously agreed European Council guidelines, as well as statements and declarations, notably those of 25 November 2018, in particular as regards the level playing field, governance and fisheries.

6. Against this background, the European Council invites the Unionʼs chief negotiator to continue negotiations in the coming weeks, and calls on the UK to make the necessary moves to make an agreement possible.

7. As regards the Internal Market Bill tabled by the UK government, the European Council recalls that the Withdrawal Agreement and its Protocols must be fully and timely implemented.

8. The European Council calls upon Member States, Union institutions and all stakeholders to step up their work on preparedness and readiness at all levels and for all outcomes, including that of no agreement, and invites the Commission, in particular, to give timely consideration to unilateral and time-limited contingency measures that are in the EUʼs interest.

9. The European Council will remain seized of the matter.

1/3 Disappointed by the #EUCO conclusions on UK/EU negotiations. Surprised EU is no longer committed to working "intensively" to reach a future partnership as agreed with @vonderleyen on 3 October.

“Disappointed by the EUCO conclusions on UK/EU negotiations. Surprised EU is no longer committed to working "intensively" to reach a future partnership as agreed with [EU Commission President] Von Der Leyen on 3 October.

“Also surprised by suggestion that to get an agreement all future moves must come from UK. It's an unusual approach to conducting a negotiation.

“PM Boris Johnson will set out UK reactions and approach tomorrow in the light of his statement of 7 September.”

Let's have some Brexit backbone

The UK economy is bigger than 18 EU countries COMBINED

The British have a reputation for being self-deprecating. In many ways this an admirable quality.

At times like this, however, it is worth stating some basic facts to put some Brexit backbone into the UK Government's response to the EU today. The United Kingdom is a major player on the world stage, ranked No.6 in the World in terms of GDP. For the EU the UK is also an essential trading partner, as well as being an effective guarantor of Europe's defence by virtue of our military strength, membership of the Five Eyes network, and permanent membership of the UN's Security Council. 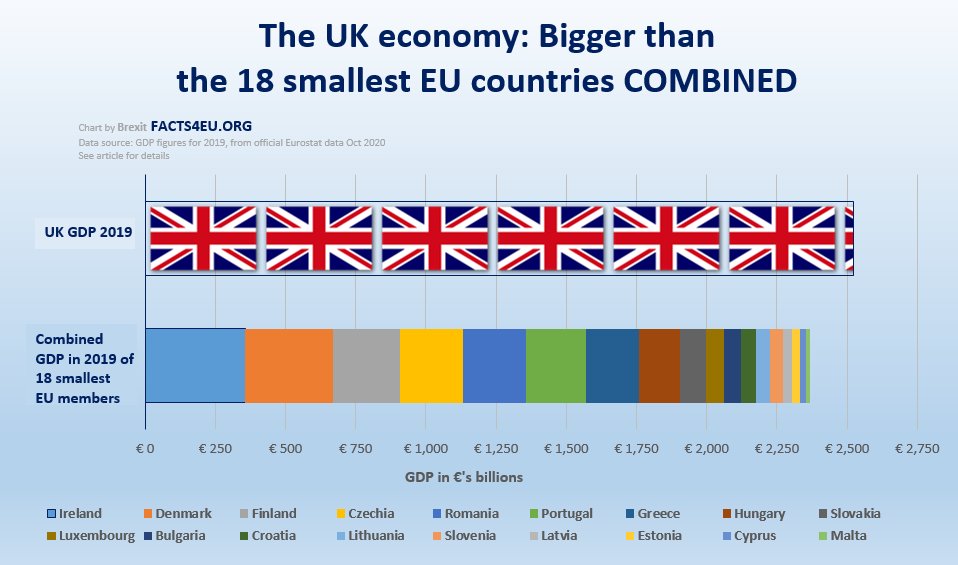 Our research using official ONS data shows that the EU27 have made over half a trillion pounds (£539.2 billion) in the last decade, from trading goods and services with the United Kingdom.

Conversely, when it comes to the United Kingdom’s trade with the Rest of the World, the UK’s surplus totalled over a quarter of a trillion pounds (£285.7 billion) in the last decade. 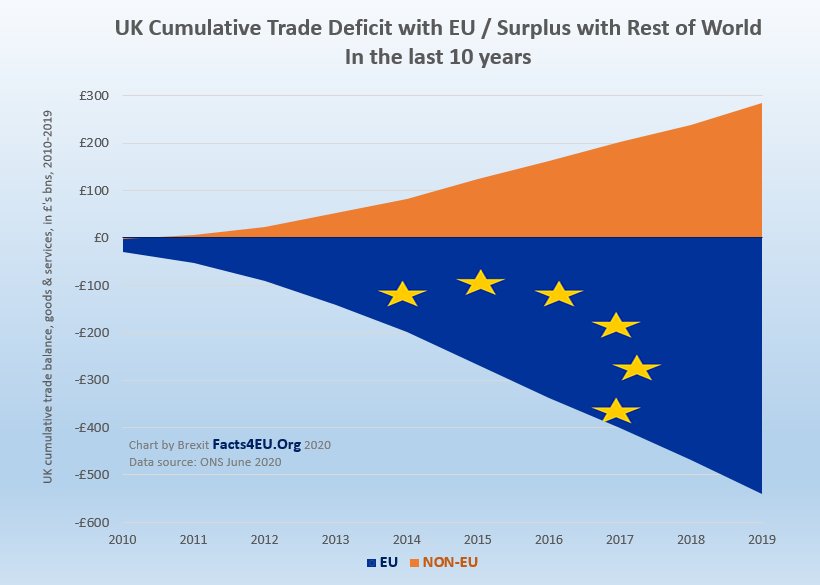 It's time to put some backbone into Brexit, Prime Minister

It has been over four years since the majority of the British electorate voted to become a free, independent, and sovereign country once again. Prime Minister you committed to deliver on this democratic decision.

On 07 September - just five weeks ago - you also committed to a deadline of yesterday 15 October 2020 for the EU to agree a sensible and normal trade deal, or the UK would have to pursue its own path.

“The EU have been very clear about the timetable. I am too. There needs to be an agreement with our European friends by the time of the European Council on 15 October if it’s going to be in force by the end of the year. So there is no sense in thinking about timelines that go beyond that point. If we can’t agree by then, then I do not see that there will be a free trade agreement between us, and we should both accept that and move on.”

The EU Council's statement yesterday can only be construed as another bad faith position by an organisation seemingly intent on punishing the British people, in contravention of the Withdrawal Treaty. Accordingly we urge you to inform the EU today that in light of their unreasonable actions the UK has no choice other than to plan for trade with the EU on WTO terms.

At the same time, we urge you to:-

We feel sure you will do the right thing today, Prime Minister.

Finally, can we ask all readers to consider making a donation to our work today? We can only keep going with public support, as we have no foreign billionaire backers unlike some Remain organisations. Quick, secure, and confidential donation links are below this article. Thank you so much if you can help us to keep up the fight for a free, independent, and sovereign United Kingdom.

The EU have raised the stakes,according to RTE's Tony Connelly, (usually a reliable source of EU information) Barnier is going to attempt to use
access to EU energy supplies,gas and electricity as a lever to obtain the fishing deal he wants.For lever others would use the word blackmail, it seems our "friends" in the EU will try to bully and force a deal on their terms.Napoleon Macron and the rest of the EU leaders are now desperate, to try and bring the UK to heel.The Australian style trade agreement with the EU looks very welcoming,thats the only way to counter these bully boy tactics.To obtain a trade deal where the EU has a £90billion surplus, the EU want to make your laws,impose their legal system,and have access to your sovereign fishing grounds,on their terms.No wonder the EU has few free trade agreements with other sovereign countries!

Well I am not surprised we have come down to this and I apologise for this link but at 13:00 mins or so this video of Boris in action made me want to be sick.
https://www.bitchute.com/vi...
I no longer trust or believe in Boris and I had such high hopes for him and a rejuvinated Conservative party.

Hold on Concerned, No. 12. I've just read on Rte that David Frost has just announced to Monsieur Barnier he'd better not bother coming to London next week, unless the EU are ready to accept our offer for a Trade Agreement. Otherwise, there is nothing further to discuss.
See link: https://www.rte.ie/news/bre...