25 years of the EU ignoring its treaties - Sweden, the Euro, and sinking EU arguments

Yesterday we published our analysis of the state of play for the EU, as it reviewed the member states who are supposed to have adopted the Euro currency - but haven’t. Those readers who missed this excellent Brexit piece can find it here.

Today we provide clear and damning evidence that the EU’s obsessions with its treaties is highly selective – if indeed more evidence were required. Our report below shows that the EU’s attacks on the UK for supposedly not abiding by treaty commitments are not fair, nor reasonable.

Sweden, the Euro, and 25 years of the EU ignoring treaties

Sweden still has its own currency the Krona, or ‘Crown’.

Our report yesterday showed the simple fact is that there isn’t the remotest chance of Sweden or another EU Member State joining the euro before the next “Euro Convergence Report” comes out in June 2022. Despite this there is – and has been for many years – a legal obligation in the EU’s Treaty for seven EU countries to adopt the euro as their currency. 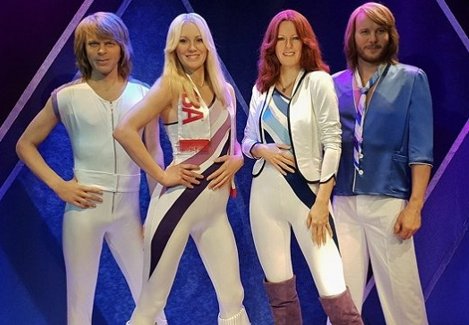 (Yes, we know that some readers would have Abba right up there as Sweden's crowning glory, but...)

Many would say that (privately) most governments of candidate countries would be perfectly happy for their Treaty obligations to continue to be effectively ignored by all sides for many more years.

For example we are quite sure the Swedes are happy. In 2003 the Swedish people were asked in a referendum if they wished to ditch their beloved Krona and join the euro. On a massive turnout the result was 56% against, with only 42% of the people voting for the euro.

Interestingly, this referendum had to be non-binding, because the terms of Sweden’s entry into the EU – enshrined in EU treaty - required it to join the euro.

The Swedes clearly didn’t care, and told their government this.

What do the Swedish people think about joining the EU’s flagship Euro project now?

In the beautiful Swedish city of Gothenberg there is a respected Institute which forms part of the University there. Founded in 1986, Gothenberg University’s SOM Institute has been researching and publishing data on Swedish attitudes to key issues of all kinds for the last 35 years. We have found their research to be very interesting.

When we wanted to understand more about the Swedes’ attitudes to the euro, we turned to the SOM Institute’s latest research.

25 years of EU forcing Sweden to ditch its currency for Euro, and Swedes still say “Nej” 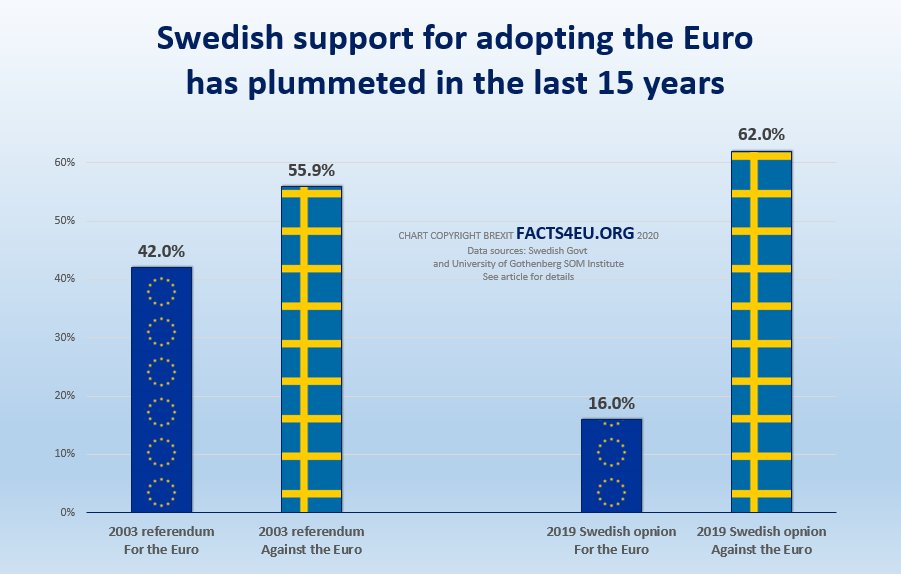 As one of our Swedish sources told us:

“Sweden pretends it’s trying to adopt the Euro,
and the EU Commission and ECJ pretends to believe them.”

Maybe Monsieur Barnier should stop preaching to the UK?

The next time Michel Barnier preaches to David Frost that the UK must abide by the ‘Political Declaration’, Mr Frost might want to remind Monsieur Barnier that Sweden has failed to obey its formal and legal Treaty obligations since it joined the EU 25 years ago and that this doesn't seem to have been a problem.

The EU Commission even admits on its current website that "Sweden does not have a target date to adopt the euro."

Finally, in its report last week, in the section on Sweden the EU noted:

“Pursuant to… blah, blah… the Swedish Parliament approves the Central Bank's profit and loss account and its balance sheet… blah, blah. This practice impinges on the financial independence of the Riksbank and is incompatible with Article 130 of the TFEU [EU Treaty].

“The Parliament must not be involved in the relevant decision-making process.”

We have not yet heard what the Swedish people think about the EU’s insistence last week that only unelected bankers may decide on important financial matters, and that the Riksdag (Swedish Parliament) has no role to play and no say.

However, given the state of Sweden’s media these days, it is unlikely that the Swedish people will ever find out.

The EU’s Chief Negotiator with the UK, Michel Barnier, has been becoming increasingly agitated. Put simply, his period of glory days when he enjoyed easy pickings with Remainer May and her group of Remainer civil servants has now been over for many months.

There’s a new kid in town – several of them in fact, including one with a disastrous, blond haircut, another with no hair issues per se but with a truly appalling, teenager dress sense, and yet another who has taken to wearing some slightly-disturbing Joe 90 spectacles.

On Friday the Chancellor of the Duchy of Lancaster, the Rt Hon Michael Gove MP, issued the definitive answer to the EU regarding the possibility of extending the Transition Period. None of this should remotely be news to the EU, but then they have been used to repeated and continuous backtracking in the past by Theresa May and her appeasement troops.

I formally confirmed the UK will not extend the transition period & the moment for extension has now passed. On 1 January 2021 we will take back control and regain our political & economic independence pic.twitter.com/nZjNpez8LI

Tomorrow the UK’s elected Prime Minister will hold a video-conference with :-

We suggest the PM goes into that video-conference tomorrow positively brimming with energy, confidence, flair - and yes, a huge dash of British Bulldog spirit.

Dear reader, if you like what we research and write, please do help us out with a donation if you can. Quick and safe ways of doing this are below. Unlike some Brexit organisations we have no big donors – only decent and ordinary people like you. Please don’t leave it to others as it means we get almost nothing and will not be able to see this fight through to the end. Thank you so much.

Reminds me of the State aid question, where Germany and France do as they wish and the UK gets sued for breaking EU regulations.

Northern Races have always over the Centuries show great courage and independence.
In Scotland something has gone wrong. A cry for independence in order to had over the role to the EU and Brussels Commission.
Has the Education regime turned us soft?

Sydney, there's a lot of us in Scotland who aren't as nuts as that. But the current Scottish government is a clever machine, with a lot of hidden power, which it is working to build into an unassailable control. What it's done to Scottish education (on top of what has been done generally to education in the last three decades) is wicked. It's using covid-19 to hide, kicking (yet again) an education review into the very long grass. Probably won't happen until the Holyrood elections next year. In the meantime the only opposition in Holyrood is Scottish Labour. The Scottish Tory leader seems to agree with Nicola more often than not.

Off topic.
The anti white, anti conservative, anti Brexit, anti democratic MSM are having a field day today, concerning yesterday's events in London: condemning anarchy, whilst at the same time applauding it.
It's ok to threaten and destroy rather than debate and protect.

What p***es off Barnier is that Swedish ATMs are all over Latvian regions still.

Patrick F, I wonder how the protestors will identify the next statue to vandalise if they can't look it up in google first...

The Euro has set back the Eurozone by at least 50 years. It has not increased choice, price transparency or competition, in fact the opposite. Plus massive debts, low growth and dumping.

Wilson 6. I would suggest the protestors head over to the USA and search diligently for statues of notorious slavers such as G Washington and T Jefferson. I am sure that desecration and removal of their effigies will have the desired positive effect.

Hassan W because bringing 27 different economies together under one umbrella doesn't work!! They each have different needs and are not on parity with each other!! So some will always have to give while others take

The euro is being used as a tool by the unelected elite in Brussels to control the member states and make sure that they pull the strings. Just ask the southern member states for example.