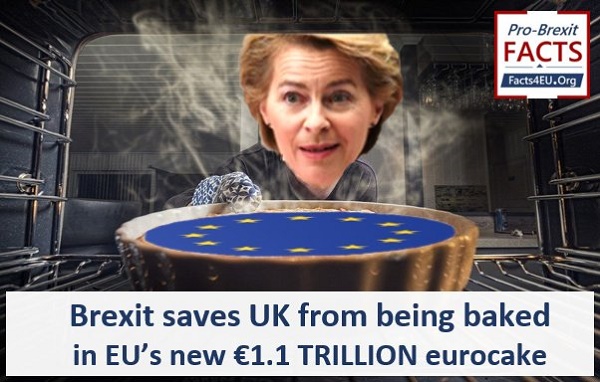 The UK’s COVID economy may look bad, but without Brexit it would have been much worse

Brexit Facts4EU.Org analysis shows what a nightmare the UK has (almost) escaped from

The EU Commission says it is planning to spend a total new budget of €1.85 TRILLION, starting from 01 January next year. This comprises €1.1 TRILLION for the ‘normal’ EU budget and €0.75 TRILLION for the Coronavirus measures.

When Michael Gove and Boris Johnson formally confirmed on Friday and Monday to EU bureaucrats and three of the EU’s many presidents that the UK would not be extending the Transition Period, an enormous financial weight was lifted from the shoulders of UK taxpayers.

Every seven years the EU has to agree a budget lasting for the next seven years. Each time, this causes an almighty tussle between the EU Commission, the EU Council, and the EU Parliament. In reality, it is the 27 leaders of the member states of the EU who make the decision and everyone else falls into line, regardless of what political commentators call “the optics”.

Here we focus purely on the normal, non-COVID, budget plans for €1.1 TRILLION 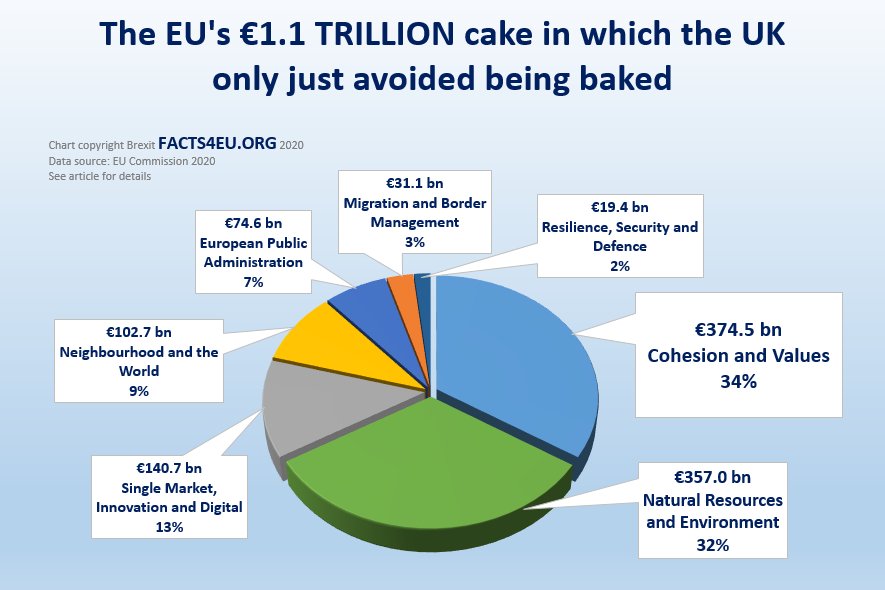 What are some of these budget headings really about?

The largest spend planned by the EU Commission is on something called “Cohesion & Values”. In the EU’s plans from January onwards this comes to an astonishing €375 billion. The vast majority of this goes to what the EU calls “Economic, social and territorial cohesion”.

In reality this is the EU’s vast wealth transfer mechanism from the richer EU countries (and the UK is still the second-highest contributor to this) to the poorer countries. As we have reported in detail many times before, the UK is not entitled to any money at all from the Cohesion Fund.

The second-highest spend planned by the EU Commission is on its flagship green agenda: €357 billion.

In summary, the two biggest areas of expenditure – ‘Cohesion & Values’ and the ‘green agenda’ account for a full TWO-THIRDS of the EU’s proposed budget from 01 January next year, 2021. 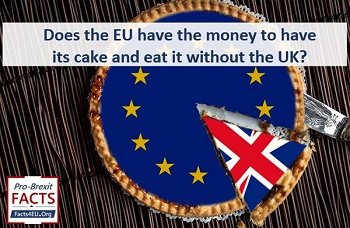 Brexit Facts4EU continues to produce reports like these because it's important to remind people why we're leaving. We mustn't forget that we continue to face an overtly Remainer Establishment, many of whom still have not given up.

The great news in the last week has come from two video conference meetings, one held by Michael Gove and members of the EU Commission, and the other held by Prime Minister Boris Johnson with three of the EU’s many presidents.

The formal confirmation given by the UK – and now finally accepted by the desperate EU – that the UK is not prepared to extend its ‘EU colony status’ (the Transition Period) had many Brexiteers breathing big sighs of relief. The decision in itself was not a surprise to anyone, given that Mr Johnson’s Government had already enshrined this in legislation at the start of the year, but it was the first time that the EU bureaucrats finally seemed to give up hope of keeping the UK shackled to the EU until the start of 2023.

Great news, but there’s more to do

There remains a huge amount to do to ensure that Remainer civil servants (and many politicians) do not derail the express train to United Kingdom freedom and full independence. Nonetheless it’s important to recognise positive milestones along the journey and we certainly had one of these in the last week.

Please help us to keep this train on the tracks. We reach a very large number of readers each week but only a tiny fraction donate to support our work and keep us going. Could you be one of these heros of Brexit? We do not indulge in plush London offices, secretaries, or expense accounts – just hard work. Quick and secure donation methods are below. Thank you so much.

[ Sources: EU Commission | EU Council | EU Parliament | No.10 Downing St. ] Politicians and journalists can contact us for details, as ever.

So glad that we won't be expected to be the biggest contributor to that pie. We all know we'd get the smallest slice of it!

Don't have any faith in Boris, think he will give our fish away 🐟

David G I fear your are correct but let's hope not.

Cannot wait for the reality to sink in with some of the Germans - especially as few of their states actually pay their way & support the rest. Cannot see the Bavarians being happy at all.

The figures are eye watering ... and all on vanity projects !!!

We will see, but if Boris fluffs it then that will be it for the TORIES!

All that cohesion spending. Big question, does it generate benefit?

We will still be giving them the £39 billion divorce bill......unless we leave WTO.

Carole B yes but who else is there can’t rely on Farage , Labour will turn any one over who has earns a living or built a life based on work the others are not viable

Money, it's like blood to them, they think they can just go and get a transfusion for nothing.