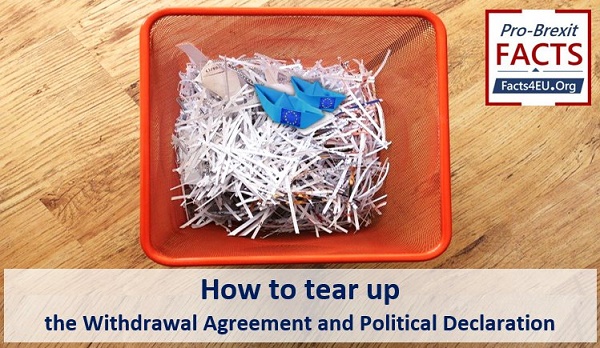 In this report we summarise the case for revoking the Withdrawal Agreement (WA) and Political Declaration (PD) first agreed by Theresa May and her civil servant Olly Robbins in September 2018. The subsequent Withdrawal Bill was then signed by Boris Johnson on 24 January 2019, after a change to the Northern Ireland Protocol.

Brexit Facts4EU.Org has reviewed the legal arguments contained in a 102-page paper published by the new think tank named the “Centre for Brexit Policy” on 11 July 2020. The arguments are written by some of the country’s top lawyers experienced in these matters, such as Martin Howe QC, Chairman of Lawyers for Britain, and Barnabas Reynolds, a Partner at Shearman and Sterling, amongst other experienced lawyers in EU matters.

The full legal argument for tearing up the WA and PD

As for the rest of the legal arguments, they are best read in full in the CBP paper, starting on page 68. Of necessity this Brexit Facts4EU.Org article can only present a summary together with key points from the document.

Right: Barnaba Reynolds, Partner at Shearman and Sterling, and one of the report's authors

The CBP advocates a course of action from now until the end of the year. Below we present key excerpts.

“As can be seen, the key elements of the Withdrawal Agreement including the Northern Ireland Protocol are incompatible with UK sovereignty if continued into the future and should operate merely as a steppingstone to an end of year long-term relationship between the UK and the EU.

“The EU has seriously breached the agreement, even as it stands, since it has been structurally unable to engage in meaningful negotiations (for what is now the majority of the intended negotiation period) towards a sovereign outcome for the UK.

“The UK therefore needs to prevail on the EU to agree to remove the sovereignty-incompliant elements of the WA and the Protocol or be ready to repudiate the arrangement.”

As a result, the UK’s offer should be as follows:

If the EU refuses a mutually beneficial future arrangement by the end of 2020, then the UK should:

This paper, which was predominantly written by expert lawyers, in effect proposes the tearing up of the WA and PD. It pays lip service to a new agreement being negotiated with the EU, but we cannot imagine that the intelligent people who wrote it actually believe that the EU would ever agree to that.

In short, the paper provides a road map to tearing up the abomination that is the WA and PD, based on the EU being in breach of its obligations.

There is much else in the paper which we have not summarised, in order to ensure that this article is read by the widest number of people. Some of the Brexit Facts4EU.EU.Org team have now read the paper from cover to cover twice. We will be amongst the very few who have.

There is no doubt that this paper contains important legal arguments justifying a revocation of the WA and PD, and we welcome it on that basis. In the interests of remaining positive, we will not comment on certain areas in the paper with which we disagree. Neither, for the avoidance of doubt, will we comment on the fact that we, as the organisation with the largest repository of Brexit facts in the world, (the Brexit Index), has had no approach from the CBP, and nor were we given prior notification of the preparation of this paper. 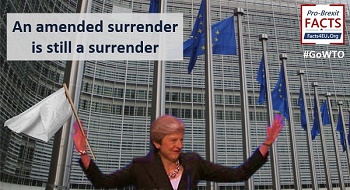 The only change to the abomination that was Mrs May’s Withdrawal Agreement after Boris Johnson became Prime Minister was the change to the N.I. Protocol – all other appalling provisions of that Treaty remained intact. Many of those who supported Boris Johnson and the Conservative Government agreeing this Treaty in November last year and signing it in January this year are now advocating and promoting that the WA and PD be revoked.

Brexit Facts4EU.Org’s repeated repudiations and rejections of both versions of the WA and PD, starting back in September 2018 when they were first published, have now been entirely vindicated by this latest report and its legal conclusions.

Now we need the political will

We are sure that the Prime Minister and his team will be digesting this report and we very much hope that it influences policy. We must extricate ourselves from this awful treaty as soon as possible.

Finally, summaries like the one above take time. Please donate today to our work, so that we can continue to bring you information like this. Quick and secure donation links are below. The vast, vast majority of our published work is original, based on our own research. We do it as part of the fight to achieve a fully-free and independent United Kingdom. Thank you so much if you can help us. We rely 100% on donations from readers like you to keep going.

[ Sources: Centre for Brexit Policy paper 11 July 2020 | Barnabas Reynolds ] Politicians and journalists can contact us for details, as ever.

The EU clearly want to be able to control the UK laws and judiciary and markets. The EU have never negotiated in good faith towards the UK. The EU stated that the UK must be punished for for daring to challenge the EU dictatorship. So the only direction the UK can take is to to go to WTO rules and no EU interference in the UK politics the EU has more to lose than the UK the EU trade surplus is at risk and the divorce payment and the membership fees

if Boris wants to be on a par with Churchill or Thatcher as a giant one Day He must simply walk away now and go to WTO if Liam Fox gets appointed as CEO of the WTO, We will have a fellow ally and a Fellow Briton on board

Industry has had 2 false starts at leaving with no deal.
They will be sceptical about preparing for no deal again.
Boris needs to end these mock negotiations and start real preparations for no deal.

One would hope that the tough UK negotiating this year has been leading up to this. There will be pressure to keep the WA if the EU gives substantial ground. That will sort the men from the boys and show us if Boris is a big stakes poker player.

This must be one of the most momentous documents ever published by Facts4EU. There is an opportunity to cease payments to the EU and repudiate the NI protocol thus bringing to an end the EU's weaponisation (is that a word?) of the NI Agreement as aided and abetted by its useful idiot in the shape of the ROI. The concluding legal statements call for an Act of Parliament but how can we peasants help bring this about? I shall of course write on the subject to my MP but, sadly, will receive in due the course the usual, predictable, bland "your call is very important to us" and "here's how I voted" sort of response. So this comment, folks, is an appeal for ideas. What can I/we do to ensure this issue is brought to the attention of the decision makers?

You simply have to ask, Why did the UK sign the Withdrawl Agreement? There was no compunction in the Lisbon Treaty to do so. Johnson holds full responsibility for foisting the WA on the UK along with all those who supported him.

The website 'standup4brexit.com' (still current) says: ''In June 2019 we started a fresh pledge, which, in addition, asks MPs to commit to leaving the EU on 31st October and abandoning Theresa May’s Withdrawal Agreement as dead''.
This pledge was made by BJ and many other MPs. What part of the word ''pledge'' didn't they undertstand?

Derek @ 18. Ask anyone who can give you a coherent answer. I ask you.