Brexit Facts4EU.Org sheds some Brexit light on the murky world of EU delays

Yesterday the US Ambassador to the Court of St James, Ambassador Woody Johnson, made it perfectly and very publicly clear that the United States is ready to start formal trade talks the moment the UK leaves the EU.

Unfortunately, unlike the US, the EU will not be ready.

Ambassador Johnson stated yesterday that the USA is ready to start agreeing new trade arrangements with the UK in two weeks’ time - on 01 February – the day after the United Kingdom exits the EU (albeit in name only).

How is it possible that the EU is not ready to start trade talks after all this time?

On the other hand, the USA is ready to start

In the 1980s Ms Martinez Alberola attended the College of Europe in Brussels, as well as the Université Libre de Bruxelles. Aged 56, she has only ever worked as a technocrat for the EU.

Is the EU really a credible international organisation?

The EU Commission still has not even drafted its proposed mandate for negotiating a trade agreement with the United Kingdom. According to Monsieur Barnier, speaking in Sweden last week, he hopes they will have completed this by 01 February.

This is the same day that the USA is ready to start agreeing trade terms with the post-Brexit UK. While the United States is pressing ahead, the EU will still be talking amongst themselves.

Once the Commission has produced its “negotiating mandate”, it then has to propose this to the EU27 governments for approval. It is expected that there will be some disagreements. Some governments will insist on prioritising certain issues, such as full access to British waters, whereas others will care far more about the bulk of the trading arrangements between the EU and the UK.

We expect this to be discussed at the General Affairs Council on 25 February although no agenda has yet been produced. Monsier Barnier himself hopes that the final mandate will be agreed by the end of Feb/early March. Only then can the first negotiating meetings with the UK’s team be planned.

"This is no time for timidity. Parallel negotiations will stop us becoming a rule-taking satellite of Brussels," says former Brexit Minister Steve Baker MP, the Chairman of the ERG - the main grouping of Eurosceptic Conservative MPs in Parliament.

In a powerful article in the Daily Telegraph yesterday (FREE link), Steve Baker MP laid out the compelling case for conducting trade negotiations with worldwide partners, without waiting for the EU.

It was this article that the US Ambassador responded to so quickly. 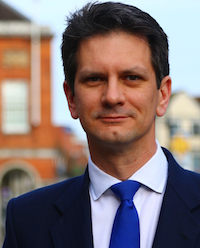 Many readers will be astonished that the EU is still not be ready to negotiate the future trading arrangements between the EU and the UK, nearly four years after the UK’s EU Referendum took place.

Instead, the EU followed a policy of delay and obfuscation, introducing contrived ‘priority areas’ which had to be agreed before they would discuss anything else at all. Unsurprisingly one of these was money, and Theresa May meekly gave into to this demand. Rather more surprisingly the new Johnson Government has not challenged this.

On a more positive note, many countries are queueing up to talk trade with the UK and it is clear that the USA is enthusiastic to start. Others such as Australia and New Zealand have long indicated their keenness.

The irony of all this, of course, is that there is not – and never was – any legal restriction on the UK negotiating trade deals with other countries, provided the actual deals did not start until after the UK had left the EU.

We were the first to say this in 2016, and our position was backed up a month later when Lawyers for Britain published their opinion. We are well aware that some of the mainstream media such as the BBC do not seem to know this, and continue to report incorrectly, but that is the case.

Nevertheless, we are where we are. And countries like the US are champing at the bit, whereas the EU donkey is plodding along at its own pace. This in itself shows how the British people chose the right course back in 2016.

Finally, we hope that readers will back our work with donations to keep us going at this important time for Brexit. Quick and secure donation methods are below. We can't do this without you. Thank you.

[ Sources: EU Commission Article 50 Taskforce | US Ambassador | Steve Baker MP ] Politicians and journalists can contact us for details, as ever.

kzb you are right, the EU played a blinder against our inept and probably complicit 'negotiators' in the WA talks. We should have seen that coming though given the useless 'deal' (described by JRM as 'thin gruel') that David Cameron brought back in his 'renegotiation' in 2015. The problem as I saw it was that the people batting for Britain didn't believe in what they were trying to achieve and were enthusiasts for the European 'project' themselves. Hopefully Boris's people have more backbone and will do what is right for the UK not the EU.

Michael Wood at 9,
It does not make sense, what comes out of it is that a few people will be well paid and make a lot of money, including the current Governor of the Bank of England. He has said and written the right things to be appointed to the new role of United Nations Special Envoy for Climate Action and Finance.
Mr Carney said the UN climate change conference "provides a platform to bring the risks from climate change and the opportunities from the transition to a net-zero economy into the heart of financial decision-making".
"To do so, the disclosures of climate risk must become comprehensive, climate risk management must be transformed, and investing for a net-zero world must go mainstream," he added.
Economic double talk.
Lord Stern is professor of economics and government and chair of the Grantham Research Institute on Climate Change and the Environment at the London School of Economics.

''...‘priority areas’ which had to be agreed before they would discuss anything else at all. Unsurprisingly one of these was money....''
Isn't it illegal to give money to a foreigner in the interests of trade? Isn't this what's known as ''bribery''?
COMMENT 5 - Ms Jell - and it isn't ''BJ's deal'', is it? It's still TM's WA that so many voted against only a short while ago. That ''deal'' which BJ (and others) pledged to ''abandon'' as ''dead'' (still to be seen on standup4brexit.com).
We are being whipped up and encouraged to rejoice unreservedly on 31 January in celebration of Brexit - so that we will be blinded to the fact that it's actually BRINO.

Why isn't it said more often that we don't actually NEED a trade deal with the EU in order to escape its poisonous tentacles? We don't need the EU to open the cage door. We could just fly.
We are being bamboozled. As usual.

L Jones #14
Absolutely correct. Too many people think a country needs a trade deal in order to trade. That is garbage. UK businesses will probably trade will more countries the UK does not have a deal with than those that it does. Yes a form of deal can make it easier for business but it is NOT absolutely necessary.
As for the EU --as I said the other day the EU importers will be just as anxious to keep business going as the UK exporter. The EU businesses are currently making money , they will not want to stop that.

Comment 13 - L Jones - We are all aware that it is May's deal, but it is being presented, slightly tweaked, as Boris's new deal, which is why it is giving such cause for alarm. and signing it would be a disaster. I am under no illusions about the content and implications - see Brexit Factsheet No 7 'Forget Politics, is Boris's new EU Treaty Brexit? No, it's not'. I pray it is not yet another betrayal in the guise of The Emperor's New Clothes and that Boris will not sign this Treaty.