Will the Scottish people really vote for economic EU-reunion?

Not if they are given the facts before any new "IndyRef"

In the final part of our three-part series on Scotland and the EU, Brexit Facts4EU.Org looks at the basic economic consequences of a newly-independent Scotland trying to join the European Union.

We also interviewed a prominent Scottish politician for his views.

Scotland and the EU

Just how valuable to Scotland is the EU, for exports?

Below we show the latest figures available (for 2017) from the Scottish Government, for total exports from Scotland. 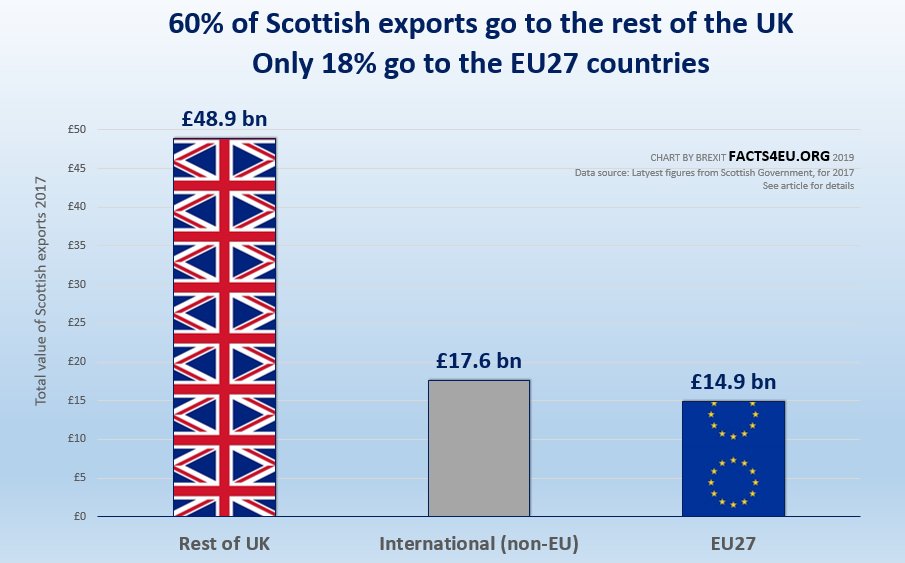 Here is what the EU itself says about countries wishing to join:-

“Member States are expected to co-ordinate their economic policies and are subject to the Stability and Growth Pact on fiscal surveillance. New Member States are also committed to complying with the criteria laid down in the Treaty in order to be able to adopt the euro in due course after accession.

“Until then, they will participate in the Economic and Monetary Union as a Member State with a derogation from the use of the euro and shall treat their exchange rates as a matter of common concern.”

We will look at just one of the essential economic criteria referred to above. Protocol 12 of the TFEU (Treaty on the Functioning of the European Union) stipulates:

For Scotland to meet the EU’s membership criteria it would have to make
savage cuts in the devolved government’s public expenditure.

The SNP is Scotland’s largest political party. It has 62 MSPs (Members of the Scottish Parliament) in Holyrood, Edinburgh, which gives it three short of an overall majority.

In the United Kingdom Parliament at Westminster it has 47 MPs. This makes it the third-largest political party in the UK Parliament, although it must be said that Scotland is significantly over-represented there by population.

The SNP manifesto 2019 on Brexit

“We will work with others across Scotland and the UK to escape from Brexit. In a UK context, we will support a second EU referendum with Remain on the ballot paper. And if it is the only alternative to a ‘no deal’ Brexit, we will support the revocation of Article 50.

“The SNP believes the best future for Scotland is to become an independent member of the EU.”

Brian Monteith MEP is currently Chief Whip of the Brexit Party at the EU Parliament. Prior to that he served eight years as an MSP in the Scottish Parliament, including four as Convenor of the Public Audit Committee.

Here is what he told us about Scotland and the EU:-

“Some of the things Scotland could expect: it would need to resolve the problem of establishing its own currency with its own Central Bank so that it could agree to joining the Euro at some point in the future (both are pre-requisites to joining the Euro).

“How would Scotland establish the reserves necessary for a Central Bank when it is already carrying a huge annual deficit and running up public debt every year?

“It would be expected to join Schengen - automatically creating the need for a physical border to process individuals travelling between England and Scotland; by accepting the single market and customs union it would anyhow require a border for goods. There is no Irish sea between Scotland and England to fudge the issue.

“Scotland would be a net contributor. Scotland's valuable fisheries would be brought back within the Common Fisheries Policy, hitting Scottish fishing communities who were expecting to take back control. And there are many other issues.”

Brexit was never about trade or economics. It was always about freedom, democracy and sovereignty. This is something the Remain campaign never understood.

When it comes to Scottish independence, we understand that for many Scottish people the issues are not economic, just as they weren’t for Brexiteers in the EU Referendum.

That said, there are some fundamental facts which the Scottish people deserve to know. Above we have tried to highlight some of these because they are so overwhelming.

In this three-part series we have tried to demonstrate some of the basic issues which would face Scotland in the event of another independence referendum, only five years after the one which the leader of the SNP called a “once in a lifetime decision”.

The big question for Scotland

The biggest question of all, of course, is why any of the pro-independence Scottish people would ever wish to gain independence from the rest of the UK, only to cede this very same independence to the unelected bureaucrats of Brussels.

This is the SNP’s avowed policy, and we will never understand the rationale for this. We suspect the majority of the Scottish people will not either, but we have learnt from the last four years of the UK’s Brexit machinations that state-backed propaganda is a powerful weapon which must be countered with a professional campaign.

Please donate to us today if you find our research and articles useful. Without members of the public donating, we will have to scale back our efforts dramatically in this very important year. Secure and quick donation methods are below. Thank you.

[ Sources: Scottish Government | EU Commission | Brian Monteith MEP ] Politicians and journalists can contact us for details, as ever.

The EU turned a blind eye to Greece and the dire financial state the country was in when joining the EU.
Would it do the same purely out of spite for the UK?
Frankly l think the bullies in Brussels have already shown that they would, nothing is beneath them.

Agreed William (1), they are fanatics with their utopian dream.

“The SNP believes the best future for Scotland is to become an independent member of the EU.” best oxymoron I've seen this decade..so far.

Scotland must not be allowed to walk away from the UK debt- free. The rest of the UK will be very upset if this is allowed to happen. They take their share of the debt with them. The Westminster parliament will have to vote to enact any Scottish independence referendum result. They must not vote for this without a withdrawal agreement which enforced Scotland's obligations to the UK.

Ahem, Nicola Ferguson Sturgeon, you do know, don't you that in reality there is no such a thing as "an independent member of the EU”?

@4 kzb
Nice try. But Scotland has benefited massively from england over the years.they receive genuine UK financial support.not to mention they are all on holiday tomorrow,maybe collecting a free subscription from the pharmacy. The UK on the other hand has also supported the EU for 45 years.giving lots of money we never see again. Eu dept is their own.

Sturgeon is a zealot and a fantasist, with an inflated sense of her own importance. Totally out of touch with reality.

Day 1,288 of enforced incarceration against the largest democratic mandate of our history, & still awaiting the predicted 10 plagues of Brexit to befall us.
You can almost smell the EU's sticky fingers stirring the demented SNP into a fervour, much as they did with Varadkar. Useful idiots who think that they are important to the projekt. They only have project fear.
Interesting that the figures quoted show that Scotland, approx 8m population, account for over 50%, 54%, of the entire UK's deficit which of course adds to our debt. Someone really needs to block their credit card. As the SNP seem so 'serious' about independence, why not show us and refuse all sums from the 'temporary' Barnett formula to show us all how well they can run their economy. They have considerable leeway as they effectively have devo max now.
A short while ago, I explained to a family member, a Scot for independence, what has been done to the winning 'leave' vote but in terms of the equivalent happening had the Scottish independence referendum resulted in a vote for Scottish independence. They were horrified when it was put in those terms. I then queried the SNP version of 'independence', whilst wanting to be part of the EU. They admitted to not knowing the real impact on their 'independence' when the EU is added to the equation. Again, a look of horror. This was not the independence that she'd envisaged, & resolved to find out a bit more about the EU. I'm sure she's not an isolated case. Family or not, I do wonder if some have the independence of thought to actually vote.

It certainly is a crazy World. Leaders (Corbyn and Sturgeon) appear to have no idea about Democracy or about Basic Economics. As for our joining the Common Market and being led by corrupt politicians into deeper membership of an EU is unbelievable. Why did we ever let this happen? Especially after our parents' generation gave their lives to defend this Nation against the evil of a Nazi Germany. How could we turn away from Patriotism to a form of adulation of a takeover of everything by the unelected? Germany being a main player, yet again. Were we blind, ignorant or just plain dumb? Likewise, how come Eire, wanting independence chucked the British out then just a few decades later they fell over in their eagerness to hand over this new-found freedom and independence to the totally controlling, undemocratic, EU? In exchange for a few well made roads and promises of a utopian life? "There are none so blind as those who will not see. The most deluded people are those who choose to ignore what they already know. (The proverb is traced back in English to 1546 (John Heywood).