Why has everyone forgotten the EU’s £39 billion Divorce Bill demand?

And why are we still going to sign the EU's open-ended invoice? 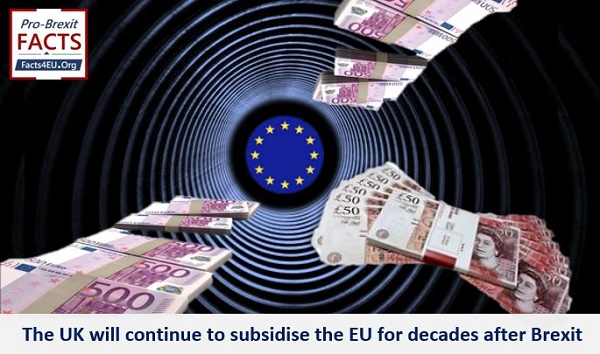 Most readers would say that sums in the order of £40 billion pounds are significant. At Brexit Facts4EU.Org we would tend to agree.

As we have reported many times, the revised Withdrawal Agreement negotiated by the new Johnson Government made absolutely no changes to Mrs May’s Withdrawal Agreement (WA), apart from the Northern Ireland Protocol (removing the ‘Backstop’). This includes the so-called “Financial Settlement” to which Mrs May agreed.

The proof is in the wording of the latest WA itself and has been confirmed in the latest House of Lords report (“Brexit: The Financial Settlement”) as well as by the House of Commons Library report published on Monday of this week.

“The terms of the financial settlement are the same in both the Withdrawal Agreement negotiated by Theresa May’s Government and the latest version.”

As we have stated in previous articles, an essential element of this divorce bill demand from the EU is not only its very dubious basis (for a country which has effectively subsidised the rest of the EU for every decade of its membership) but also the fact that the eventual bill will be decided by the EU.

Here is what the National Audit Office had to say

The NAO also stated that “relatively small changes” to the assumptions used by the Government could mean the estimates of the size of the eventual bill could vary outside the headline figure used by the Government. In particular they highlighted that the long-term EU pension liability is “subject to significant uncertainty”.

MPs are now being told that:

“It is estimated that the settlement may cost the UK around £30 billion by the time the final payment is made, possibly in the 2060s. A definitive figure can’t be produced for the final cost as it depends on future events.”

The difficulty with this new estimate is that it does not cost include the cost of Parliament having delayed Brexit. The most obvious omission is that it does not include the monies sent to the EU for the months and years after the UK was already supposed to have left the EU. These alone would take the figure over £50bn. Neither does it allow for the huge uncertainties mentioned above.

As usual, the headlines will not mention the monies sent to the EU – and which will continue to be sent to the EU under the new Withdrawal Agreement – for the EU’s various “off-the-books” funds. The EU refers to these as “off-budget”, and they have conveniently never been included in any headline government figures for the UK’s net contributions to the EU, ever.

Brexit Facts4EU.Org has repeatedly reported on these EU “off-the-books” funds, which include the “European Development Fund”, EU Trust Funds, and “The Facility for Refugees in Turkey”. These are all multi-billion pound EU funds of which the public remains blissfully unaware.

It is worth noting that the EU has never been able to produce any legal justification whatsoever for any ‘divorce bill’.

On the other hand, legal opinions from the House of Lords European Union Committee and from Lawyers for Britain all found there to be no legal case for the EU to demand anything.

As we have said before, if the EU had had any legal case, they would have been the first to shout about it.

Instead, timid Theresa and her Remainer civil servants happily agreed to the principle of a divorce bill, and the latest Withdrawal Agreement agreed by Mr Johnson’s Government continues to allow the EU to claim vast sums over the coming years and decades, with the EU deciding the amounts payable.

If any agreement for the UK to help the EU out with an ex-gratia payment were to be conditional upon the agreement of a sensible trade deal, we could understand. Sadly that is not the case. The signing of the Withdrawal Treaty on 31 January will make the divorce bill into a legal obligation.

Please help us to keep going with a donation today, if you would like to continue to bring you essential information such as that above. Thank you.

[ Sources: The Withdrawal Agreement | House of Commons Library | House of Lords European Union Committee | National Audit Office | Office for Budget Responsibility ] Politicians and journalists can contact us for details, as ever.

There can only be one reason and that is that the political establishment is frit and the silent majority mostly only are heard at election time, so in the meantime the establishment can do what the heck they like and get away with it and pay themselves handsomely.
I think of nearly 47 years of lies re the EEC and now the EU, the country is led by donkeys and seems to have learnt nothing.
I feel sorry for the taxpayer and all the nasty stuff they have to put up with.
I fear the country is in deep trouble but I definitely will never agree with this foul mouthed individual, on Breitbart today: patrick-stewart.

Thank you so much for this article.
I hope all readers will email it to their MPs and ask questions as to why we don't amend the 'Divorce Bill' before it is too late. (A simple 'nothing is agreed before everything is agreed' clause would, at the very least, ensure that payment becomes subject to productive trade talks).
Giving this money away to the EU, for absolutely no conceivable benefit in return, is utterly shameful. It is £650 for every man, woman and child; it is £60 million for every constituency - hard-earned taxpayer's money just to be thrown away at the whim of the Tory Party - no questions asked.
What does it say about our newly elected MPs if they do nothing to stop this?

It would be cheaper and quicker, possibly painful for a short while, to jump off the so called cliff. We would really be fully out, not in transition to endless talks on maintaining 'a level playing field', another name for abiding by EU rules. There is no sign that the Commission have accepted that we are leaving and that they are no longer the Administrators of the United Kingdom.
With Germany in its current economic downturn trade agreements are essential for them, meaning the EU.
It is going to be a game of Chicken. The withdrawal Act will set a time limit, meaning we are not walking away at the end of this month, but December.
Barnier sticking with the WA rules will not lead to an agreement, a new hand has been dealt.

Ms von der Leyen also said the UK and the EU will not be able to agree as close a relationship without a delay to the transition period. She said both sides should expect to see a "more distant partnership" in the future.
The more distant partnership is what we voted for, we had decided that the close political and economic partnership as a member was not what we wanted to retain. We want our FREEDOM to make our own way in the World as we did before, free of the dead hand of the Brussels Directorate.
Before the EU existed the UK quite happily cooperated with our European neighbours and will willingly do so again (take Concorde for example).
We no longer accept the free movement of people, we believe that the Citizens of the UK through its Government has the right to set the rules on immigration and who enters the Country.
As a non-member state movement of capital, goods and services is subject to the forthcoming negotiations.

Putting it simply for the EU and Ursula von der Leyen leaving the EU is diverging, it is leaving its control. A new relationship must be struck for the good of all.
The British electorate have mandated the Boris Johnson Government to finally carry out the referendum decision.
In von der Leyen promising a “truly ambitious” new partnership with Britain, as part of it, we cannot acceed to retention of our Territorial Waters, nor dancing to the EU's tune under level playing field rules.
Leaving the EU establishes a new freedom for the UK and this should not be impaired in negotiations.
Our Sovereignty is not up for grabs, and Johnson must respect this.

How can we make Boris Johnson acknowledge this monumental financial rip-off? Will the ERG have the courage to torpedo this toxic WA? I hope that all readers will mobilise their MP's to vote against further passage of the WA.

Yes 7 Faye, Sydney has very succinctly laid out the picture this government should be seeing and acting upon. Anything less than a full leave from the EU will be a tradegy which will leave the UK weak and will be seen as such by the world.

Great article. Thank you.
But ''...an ex-gratia payment ... to be conditional upon the agreement of a sensible trade deal, we could understand...'' Well, I couldn't! That's bribery, isn't it? - a payment to foreign officials in the interests of trade. Surely illegal?

Comment 8
Perhaps that's why BJ is talking up 31 January as a ''leaving date'', encouraging everyone to rejoice loudly and publicly at our exit from the EU - so that the World takes him at his word, regardless of the reality.
Then he can do whatever he likes - giving us any kind of Brexit he desires to appease his ''EU friends''.
I hope I'm wrong.