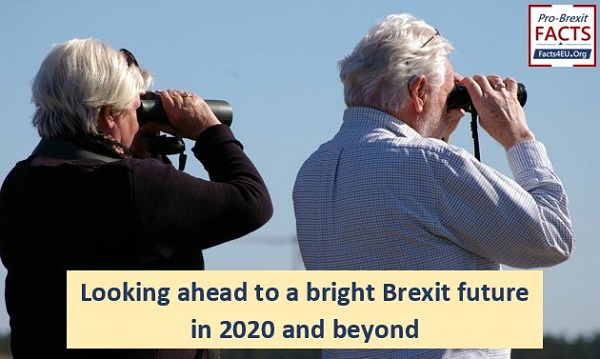 Make no mistake about it, 2020 will be a monumental year for Brexit

On Monday in just four days’ time, Twelfth Night will have passed, Christmas will be over, and Epiphany starts.

If readers follow Anglican tradition, they will be taking down their Christmas decorations by midnight on Sunday. It will then be time to get serious about the year ahead.

This coming year should contain the following defining moments:-

Note: There are many caveats to the above, and a great many aspects which will require absolute vigilance if the UK is truly to become free of the EU, but now is not the time for these.

Finally, after a 30-year battle for many patriotic people starting with the lead-up to the Maastricht Treaty at the beginning of the 1990s, the year 2020 will mark the start of Brexit and the end to the forced integration of the British people into an EU superstate.

It was the Maastricht Treaty which established the European Union and created “European citizenship”. It also established a common foreign and security policy and crucially laid the foundations for the creation of the common currency: the Euro.

The British people were given no direct say over this fundamental change in the status of their own country.

A monumental year for the United Kingdom

It is no exaggeration to describe 2020 as an epiphany in the status of the United Kingdom in the World.

As things stand, the UK will exit the EU formally (but not in practical terms) on Friday, 31 Jan 2020. We will then fully exit again on Thursday 31 Dec 2020, when the Transition Period ends.

Until the Transition Period ends, the United Kingdom will be a colony of the EU, condemned to obeying its laws, to taking its people, and to paying its bills. During this time the UK will have no say over anything the EU decrees, and will have no veto over anything.

Nonetheless, Brexiteers can still look forward to and celebrate two epic moments in 2020.

In this coming year we must be optimistic. Let’s face it, the future looks very bright compared to any of the last 30 years, and in particular to where we all were under the disastrous government of Mrs May only six months ago.

With apologies to the native New Yorker and singer-songwriter Gerard Kenny, and to paraphrase his famous song "New York, New York, (So Good They Named It Twice)", the EU really is so bad that we have to leave it twice.

To put a positive spin on this,
at least we get two great moments to celebrate in this year of 2020

Tomorrow we will announce our decision on our own plans for 2020. In short, and after four years of 7-day per week working, team members can no longer afford to subsidise Brexit Facts4EU.Org to the current extent. We are enormously grateful to all members of the public who have made donations – and especially to the handful who made generous donations.

There is still time to influence our impending decision to cut back to a 3-day per week output. If just 500 more readers subscribed to our Brexit Index, for example, this would make a huge difference. For just £5.95 per month for Standard access or £12.95 per month for the Advanced access, you would be donating whilst at the same time getting access to the largest repository of official Brexit facts in the World.

We would hate to scale back now, just when we are in sight of achieving our goal in 2020, so if readers who have not yet contributed could do so, we could see this thing through. Even a one-off donation using one of the quick and secure payment methods below would make a difference.

Thank you all, and our best wishes for 2020 – a monumental year for Brexit.

[ Sources: EU Commission | Withdrawal Agreement and Political Declaration ] Politicians and journalists can contact us for details, as ever.

I do so hope and pray with your excellent actual factual help the psoitive moments in your "positive spin", above comes to pass. Then Britain can again be free from the madness of the union with Europe, which was the biggest mistake of the last century. It was a disgrace how the political establishment pushed it through and signed ridiculous treaties and then told lies for decades about the real purpose of the EU.
Happy and healthy new year to everyone involved with Facts4eu.
It has taken most of my lifetime, for some brave politicians to put a stop to this ongoing madness.
I look forward to seeing a free UK again and I hope it can repair Commonwealth ties and make amends for their 45 year old stupidity of joining the EEC/EU.

I am very suspicious of this 'transition' period. I am sure that the EU will spend this year trying to tie us up with hundreds of new laws to the point were we may just have to break the treaty and tell them to get stuffed!
They are already going out about extending the transition period and any attempt by the government to do this will see their support plummet immediately

Sadly Michael (2) you and I and every thinking person knows what this year will be like with regard to us leaving the EU. Why on earth we need any 'transition' period beggars belief we have had nearly FOUR years to transition!!!!! They will try just like the Democrats in the USA, to destroy every advantage of leaving as possible.
I hope they fail, for the good of the country and of the wider world. If they win the long slow march of communism will continue unabated and we are all lost. It is as stark a position as that.

I agree with every word of comments 1,2 and 3 - particularly the transition period. I bitterly resent being in the EU for one more SINGLE DAY at a cost of £50 million for every day - it is torture in every sense of the word and a travesty; akin to being imprisoned for a crime we did not commit. Apart from Sir John Redwood, who is just about the only principled politician to admit that we will not be truly leaving the EU on the 31st January, my faith in the Establishment has been completely shattered and I do not trust any one of them.
Make no mistake, we still have a big fight on our hands and we must remain vigilant.
With the invaluable help and information from Facts4EU, we will not be easily fooled or lulled into a false sense of complacency.

The immediate battle seems to be to get the Withdrawal Agreement amended before the 13th January. To this end I have been lobbying for the clause to be added 'Nothing is agreed until everything is agreed'. This reconnects the WA to the Political Declaration, effectively making it one agreement. The money 'incentive' is restored - if the EU do not provide an acceptable FTA by 2020 then we do not pay them £39 billion. This should ensure the EU acts in a timely fashion and makes its best offers for a FTA during negotiations. It also acts as a 'backstop' for us, insuring that the EU doesn't just takes the money and gives nothing back in return.
We will pass this amended WA through parliament (thus fulfilling Johnson's promised part of the process), and then it is up to the EU to pass the AMENDED Withdrawal Agreement in the EU parliament by 31st Jan 2020. If they do not, then we just leave on 1st Feb 2020 under WTO rules [whilst offering the EU FTA negotiations under a GATT 24 transition period]. And the EU's refusal to accept such a reasonable amendment demonstrates their unwillingness to negotiate in good faith, giving Johnson the excuse to get out on WTO rules at the end of this month instead of one year later - and not having given the money away for nothing in return.
So I encourage readers (hopefully I do?) to write today to their MPs and local papers to lobby for the introduction of this amendment.

Some useful information (maybe the Facts4EU team can add to this?):
-
There is no legal requirement for us to sign a Withdrawal Agreement on leaving the EU
https://lawyersforbritain.o...
-
The House of Lords report (4th March 2017) made clear that we do not the EU, or need to pay the EU, any money on leaving
https://www.theguardian.com...
-
Theresa May use to say 'nothing is agreed until everything is agreed'. This was supposedly why she agreed to separating the money payment (put in the WA) from the trade talks (put in the PD). However, this linking clause of 'nothing is agreed until everything is agreed' has quietly been dropped from the EU Treaty to be signed on 31st Jan 2020. Treacherously, she now has agreed to give the EU this vast sum of money voluntarily and unconditionally - and Johnson continues to accept this ridiculous capitulation. Clearly, without this simple amendment, the Tory party still has the malign intent to deliver BRINO, not Brexit.

£39 billion is £650 for every man, woman and child - it is £60 million for every Parliamentary constituency. - it is 6 times the money promised by the Tories for 40 new hospitals.
And £39 billion is only an estimate - the final sum will be determined by the EU, and could well be much higher.
And, unless amended, it will be given to the EU for absolutely no purpose.
-
What a shameful waste of British taxpayers' money.

Project Fear is well under way now I see in the Mail: "Labour pushes for ANOTHER Brexit delay with amendment to Boris Johnson's EU Bill that would extend transition period for TWO YEARS if trade deal is not done by June".........
Communists, marxists, socialists, liberals will destroy Britain.

Handing them a breathing space until the end of 2020 seems to me to be madness. Why give them time to regroup and think of other ways of jamming their foot into our door?
And as for this £39 billion, or whatever it will be - this seems to be a bribe to make them talk about trade. That's bribery, and that's illegal. I'd like to be optimistic, as this article tells us we should be. But I am full of doubt.
We don't need a trade deal to leave this sinister 'organisation'. We know that we could leave tomorrow without one. This is all smoke and mirrors, platitudes and crumbs to keep us quiet. Again.