One week into Brexit “freedom” – a Brexit Facts4EU.Org Saturday editorial 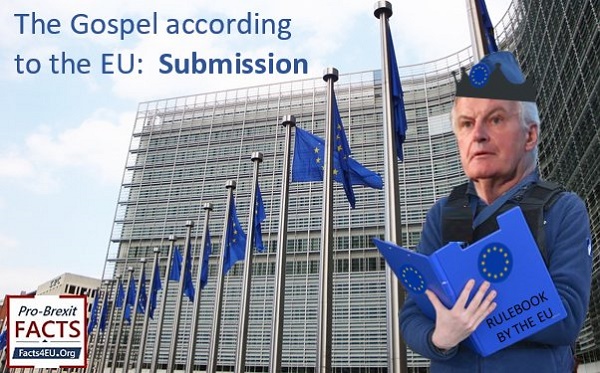 This does not make for comfortable reading, but it's important before we move on

It is one week since we all woke up on Saturday 01 February to a new dawn, living in a United Kingdom that was no longer a member of a European superstructure.

Many readers (and some of the Brexit Facts4EU.Org team) were out celebrating the night before, as the clock turned 11pm on Friday 31 January and the EU Withdrawal Act took effect. Goodness knows, we have all had little to celebrate over the past few years as the anti-democrats of the British Establishment almost took hold of our country completely.

Other readers held very mixed views last Friday night, pleased that a first step had been taken on the road to freedom, but unable to throw heart and soul into celebrations when 11 months of abject servitude to the EU was just starting.

Boris’s surrender treaty – the EU confirms what it means

Perhaps it is possible, one week on from the formal exit of the United Kingdom from membership of the European Union, to look dispassionately at where the UK is now in terms of its international status.

As so often, we will turn to the EU Commission itself for 'guidance' on this. In this way, no Remoaner/Rejoiner can accuse us of bias, fake news, being Russian, or any of the other ludicrous claims they have been making against us on social media for the last few years.

Brexit Facts4EU.Org was the first to use the term “EU colony”

The EU does not use this term, but it may as well do

What happens to the United Kingdom during the transition period?

“ During the Transition Period, the United Kingdom is no longer a Member State of the European Union or of the European Atomic Energy Community. As a third country, it will no longer participate in the EU’s decision-making processes. It will also no longer be represented in the EU institutions (such as the European Parliament and the EU Council of Ministers), EU agencies, offices or other EU bodies.

However, and as agreed with the United Kingdom:

All institutions, bodies, offices and agencies of the European Union continue to hold the powers conferred upon them by EU law in relation to the United Kingdom and to natural and legal persons residing, or established in, the United Kingdom throughout the transition period.

The United Kingdom continues to participate in EU programmes and to contribute to the Union’s budget covering the period 2014-2020.

The Court of Justice of the European Union continues to have jurisdiction over the United Kingdom during the transition period. This also applies to the interpretation and implementation of the Withdrawal Agreement.

The United Kingdom also continues to apply the EU’s Justice and Home Affairs policies, including the European Arrest Warrant.

The United Kingdom is bound to the Common Fisheries Policy of the EU and the terms of relevant international agreements.

The EU Common Foreign and Security Policy applies to the United Kingdom during the transition period and the UK must implement the EU’s sanctions regimes and support EU statements and positions in third countries and international organisations. ”

[Unedited statement from the EU Commission website, with key elements put in bold by Brexit Facts4EU.Org, for emphasis.]

This year the Brexit Facts4EU.Org team intends to focus on the continued researching and resultant publishing of punchy reports on the wonderful opportunities ahead of the United Kingdom when we eventually exit the EU fully.

Nevertheless we believe readers will want to be grounded in reality as the UK progresses along its difficult path towards full independence and freedom.

If the above summary from the EU Commission does not demonstrate the shockingly-degrading, international legal status of the United Kingdom as an EU colony in 2020, we don’t know what will.

This was agreed to by the Johnson Government, albeit somewhat hidebound by the behaviour of Mrs May’s Remainer government and its arch-Remainer civil servants.

The Bill was passed two weeks ago by the British electorate’s representatives in the House of Commons (its Members of Parliament) by an overwhelming majority. Even those MPs who voted against the Bill only did so because they would have preferred far greater servitude of the United Kingdom and its people to the EU.

These are uncomfortable facts but perhaps they are important to face, when deciding whether the ‘elites’ in Westminster really have woken up to the reality of a British people exercising its democratic muscle.

Articles like the one above do not result in us getting new donations. Quite the opposite. We know this, but over the past four years we have never shied away from giving readers our conclusions based on extensive Brexit and EU research on a daily basis.

Over and over again our articles have illuminated important issues and have provided punchy facts which have influenced the course of Brexit – in Parliament and across the country. If you value an important and highly-knowledgeable resource, please donate something today, using one of the quick and secure donation methods below.

We are indepoendent, do not have plush offices, remain non-partisan, and unlike many Brexit organisations we have no major donors. Thank you.

[ Sources: EU Commission | Hansard ] Politicians and journalists can contact us for details, as ever.

"Conservative parliamentarian Daniel Kawczysnki received a “formal warning” from the Conservative Party after a social media campaign to “cancel” him for giving a speech at a conservative conference attended by Viktor Orbán and Matteo Salvini."
Fantastic speech too, he should never apologise, and I am mad at Bojo for this 'formal warning'. Daniel is a credit to the Polish, a great MP and a credit to the conservatives.
Very good article as always. No deal exist the day after the referendum in 2016 would have been my response, however with a 'bubble' full of remoaners I knew that a miracle would have to happen for us to truly leave the EU. This article just adds to that, so on paper we have left, Now we will have best part of a year of end-of-the UK-fearmongering. My answer to that is the government needs to leave without further ado and do not give in on fishing or anything else. If they do, they are finished as a party and good riddance.

11 months of purgatory. 31st December cannot come soon enough. WTO will be better than signing up to EU rules (level playing field) for a trade deal.
Boris Johnson must be firm and be reminded of:
"No, no, no," Prime Minister Margaret Thatcher defiantly declared in the House of Commons amid calls for greater central control in Europe.
She was responding to a call by European Commission president Jacques Delors' for the European Parliament to be the democratic body of the European Community, the commission to be the executive and the Council of Ministers to be the senate.
https://www.margaretthatche... is history but foretold the future in the EU.

I still think this will end in war; haven't changed my mind one bit!
By July this year the conservatives will be poling below Labour.

The establishment at CCHQ Bow Down to BuzzFeed and the Guardian.
Daniel Kawczynski, MP for Shrewsbury and Atcham, is censored for attending a conference in Rome where the speakers included Hungarian Prime Minister Viktor Orban and Italy’s Matteo Salvini.

And still the website 'standup4brexit.com' shows the pledge made by BJ and many others that May's WA would be ''abandoned'' as ''dead''. And it wasn't. To all intents and purposes, BJ's ''deal'' is the same WA that he PLEDGED would be abandoned - else he wouldn't have described it as ''oven ready''.
That he should have signed us into vassalage like this, after PLEDGING that May's WA was ''dead'' tells us a lot about his idea of honour. It's not mine.
To have handed the 'enemy' a year to regroup and find ways of preventing us breaking free of their poisonous tentacles is outrageous.
Meanwhile, our own PM ties us down to taxation without representation - even more outrageous.

I am a terrific fan of the wonderful Daniel Kawczynski - a REAL man; if only there were more men of his calibre and integrity in Parliament this country would be in a far better state. I unreservedly applaud this man and have written a letter of support to him and a letter of rebuke to foolish Boris. And I am heartily sick of hearing the smearing term of 'far right' being applied to groups or anyone who is a patriot, is concerned about our culture, our identity, self-preservation and that of what is left of our country, who believes in freedom of speech and wishes to restore it, freedom of thought, who is seriously and justifiably concerned about the creeping domination of and violence perpetrated by Islam, here and globally, wants more action to prevent Muslim rape gangs continuing to operate, Sharia Law (which is completely incompatible with British Law and British values, mass uncontrolled immigration, illegal immigration, and mass multi-culturism which far from being beneficial overall has had a devastating socio/economic effect on Britain and which was arbitrarily imposed on us - don't remember being given a vote on this do you? Sick also of LGBT 'terrorists', Hope not Hate, Antifa, et al who are the real fascists and a Government which is complicit in empowering these groups to dominate, persecute and demoralize society.
If Boris is unwilling to deal with any of these issues to improve the lives of ordinary citizens, I have little faith in his ability to honour the real result of the Referendum, having subscribed to May's hideous deal Mark II, along with the same treacherous army of Remainers in Parliament, who haven't changed their spots overnight. And he has nominated Phillip Hammond, the biggest traitor of all, for a peerage!?
Our fishing rights are non-negotiable and this will be the first big test of Boris's integrity and commitment and honesty. Holding my breath.

We should also leave the ECHR as well as the UN

Well said Barbara (6) I could not put it better if I tried. Clarke & Hammond for a peerage? That's rewards for failure and obstructionism. No wonder some people now call it house of frauds.
I don't wish to see the HOL scrapped but hereditary Lords used to be a far better HOL than what we have today.

WHY? WHY does this disastrous surrender 'agreement' even exist?
This is plainly a ridiculous and untenable position to be in and should never EVER have been agreed.
Boris has fallen at the first fence, he had better pick himself up and start running for the finishing line or he is going to bottle our Independence...