93% of MEPs impose impossible conditions on UK, in punishment vote 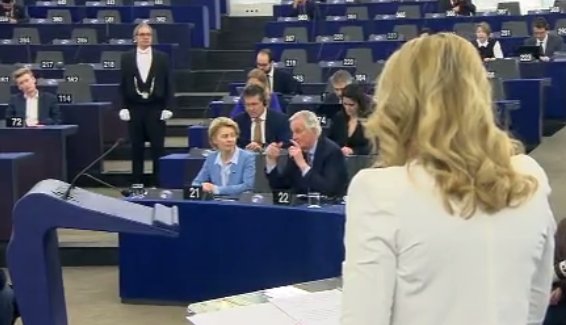 Yesterday in Strasbourg, MEPs voted by 543 to 39 in favour of a motion which would destroy any hope of a reasonable EU-UK trade deal by the end of this year.

The MEPs were debating the draft negotiating guidelines put forward by the EU Commission, as strengthened by their own even stronger demands. The eventual motion passed with ease.

The demands of the “Trade Prevention Officers” of the EU Parliament

The EU Parliament’s full list of demands is here

The EU Commission’s full list of demands is here

What does the EU Parliament’s vote mean?

For the benefit of international readers (and ‘Rejoiner’ readers from the UK ) we must explain that the EU Parliament contains representatives (‘Members of the European Parliament’) who are elected by the voters across the 27 EU member countries. These voters cannot vote for individuals, only for a list of candidates on each party’s ticket.

Despite having some claim to democratic legitimacy, the MEPs of the EU Parliament cannot propose and implement legislation. Votes in the Parliament are mostly advisory, or are rubber stamps on legislation put forward by the unelected bureaucrats of the EU Commission.

This is one of those occasions when we find ourselves having to use what might sound like hyperbole.

There, we said it. This is not, we grant you, moderate or ‘academic’ language. The problem is that when we are faced with something so far removed from day-to-day reality and normality, we really must call it out for what it is. It’s a joke.

The faster the UK trade teams agree some quick and simple sectoral deals with all the other countries of the world, the better.

In the meantime we would issue an invitation to the EU. “Do please give us a call when you’d like to pop over to the UK to talk trade properly. Happy to discuss your £100 billion annual trade surplus with us any time. You might want to do this fairly soon though, because as you know, ‘ze clock eez teecking’.”

Brexit isn't done. The UK is no longer a member of the EU - BUT THIS IS STILL AN EXIT IN NAME ONLY. We are still bound by EU laws until the end of this year, assuming the Government doesn't extend the Transition Period. Please help us to keep going for our fifth year, so we can see things through. We rely 100% on public donations and we badly need your help. Quick and secure donation methods are below. Thank you.

Is this any surprise to anyone? It certainly should not be.

On Tuesday Von der Leyen was reported as saying: "Honestly, I was a little bit surprised to hear the prime minister of the United Kingdom speak about the Australian model. Australia, without any doubt, is a strong and like-minded partner. But the European Union does not have a trade agreement with Australia. We are currently trading on WTO terms. And if this is the British choice, well, we are fine with that, without any question."
She accepts WTO or does she?. What she and the EU Parliament are demanding is the continuance of the terms and conditions as though we were still in Membership. What the EU will be asking of the UK in return for a trade deal will not be acceptable to Australia
The Cash Cow is leaving.
EU faces acrimonious summit over budget dispute. Poor countries are demanding richer states pay more to close Brexit gap
EU efforts to clinch a budget deal this month risk being derailed by widening divisions between rival camps of member states, diplomats are warning.
These budget talks are proving more bloody than most after Brexit blew a €60bn hole in the MFF — the UK was the second-biggest net payer in the EU. Richer EU governments now face demands to stump up more money to close the Brexit gap, fund new priorities such as climate change, and avoid cuts to prized agricultural subsidies and catch-up spending for poorer regions.

Our Media seem to think that by setting out their demands it gives the EU the upper hand. Rubbish!! They live in 'cloud cuckoo land', needing to continue to sell into our Market on most favourable terms
Boris Johnson must be firm and be reminded of:
"No, no, no," Prime Minister Margaret Thatcher defiantly declared in the House of Commons amid calls for greater central control in Europe.
She was responding to a call by European Commission president Jacques Delors' for the European Parliament to be the democratic body of the European Community, the commission to be the executive and the Council of Ministers to be the senate.
https://www.margaretthatche... history but foretold the future in the EU.
They are trying to find an argument to bludgeon the UK into letting them keep our fish to which they have NO legal right.

Fishing: The chances are this alone can scupper Trade talks. How on earth the UK ended up in this situation is unforgiveable.The 'Fishing For Leave' website has a couple of very recent informative articles ( find them under their 'News' section )

get lost EU no trade deal with this attitude

If Boris is true to his word and will not give up our fishing rights we will be leaving with No Deal by the end of June which is what is stated in the above listing of demands. Why wait until then as if they want to play hard ball by making such demands which will effectively tie us to the EU indefinitely with no say then out we must go now. as well as all of that if we are being tied to them then we will be subject to the amendments to the Lisbon treaty comin in shortly and we definitely do not want that. If Boris sticks to his red lines and they stick to theirs then what is the point of pointless trade talks lets get out NOW and save all of the Billions we would have to pay this year.

Eu buffoons are even bigger than the idiotic labour clowns. Bozza tell them cheerio and let’s go WTO now no matter what threat they use from this moment ban their fleet of fishing thieves from our waters and ruin their economies. We are Britain and we will not be bullied by cowardly neighbours

Wish us luck as you wave us goodbye. Here we go on our way bye bye.
WTO will do us fine as we go, out of the corrupt EU say goodbye.