EXCLUSIVE: “Is Brexit about to be done, or will we be ‘done over’?” 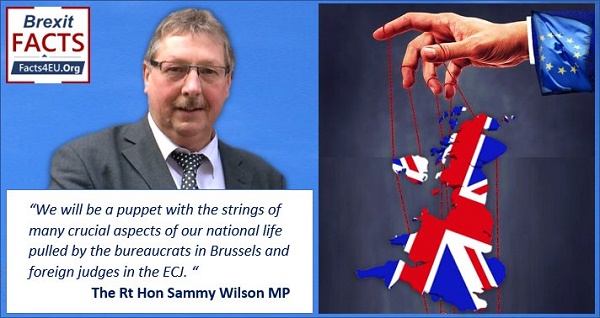 An excellent Brexit summary from an MP, with serious questions for the Government

The Rt Hon Sammy Wilson MP was formerly Lord Mayor of Belfast and has been the Democratic Unionist Party MP for East Antrim since 2005. He is also the Chief Whip for the DUP in the House of Commons.

Below he gives his thoughts on the current state of play in the Brexit negotiations, as well as his wider views on the implications for democracy of the EU’s demands, the state of the Union of the United Kingdom, and the impact on citizens of the whole of the UK unless something is done now.

As we approach the last days of the negotiations over the terms of the UK’s future relationship with the EU, it is reasonable to ask: ‘How should any final agreement be judged?’

The Prime Minister campaigned on a platform of taking back control of our laws, our money, our fish and our trade. He is right that unless we achieve those aims then we cannot claim to be an independent sovereign state. Anything less than that leaves us a vassal state, still under the control of foreign bureaucrats and judges.

The EU’s unreasonable demands must be dealt with

If the PM’s goal is to be achieved then the negotiations must replace the ill-advised surrender to the EU which took place when the Prime Minister and the Conservative party hastily agreed to the Withdrawal Agreement this time last year. The fact that the Government is now looking for ways of circumventing the agreement is an admission that it will undermine our independence. However no superficial tinkering with it is going to undo the fundamental defects it contains.

As a Northern Ireland MP of course I am angry at the NI Protocol section of the Withdrawal Agreement. Basically it keeps Northern Ireland in the EU’s Single Market, subject not just to existing EU laws but any new laws the EU introduces in the future. These will affect all aspects of life in NI including work regulations, food standards, environmental requirements and product specifications. Trade between Northern Ireland and GB - our biggest market - will be subject to expensive and time-consuming bureaucracy. In addition, goods being brought into NI from GB will be subject to EU tariffs and inspections to ensure compliance with EU standards. 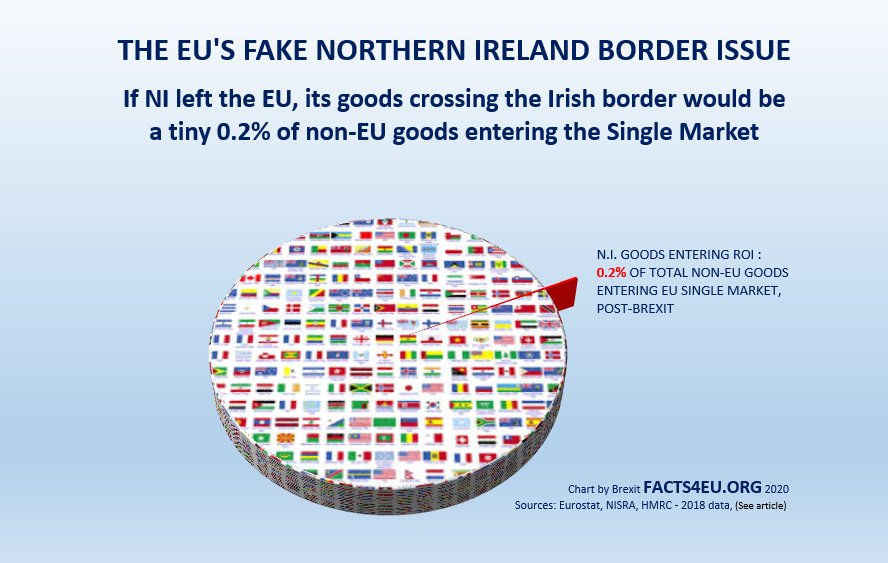 The result is already becoming apparent with many GB companies indicating that trade with NI will either become too costly or too risky, so they will no longer supply that part of the UK.

This tears apart the Good Friday Agreement and the Union

Apart from the fact that these demands break the terms of the Good Friday Agreement by changing the constitutional status of Northern Ireland without the consent of the people on NI, they also tear apart the Act of Union. Article 6 of the Act of Union gives legal assurances that as a result of being a member state of the UK there will be no disruption of trade between the countries through taxation or other barriers.

This does not amount to taking back control

On top of this it removes from the people of Northern Ireland any democratic control of the laws which cover 60% of activities in Northern Ireland because neither NI nor the rest of the UK will any longer have representation in Brussels where the laws are made.

This is an abject abdication of the governance of one of the countries of the United Kingdom to Brussels. The stark reality is that when the Government gave in to EU demands over NI it also relinquished control of a whole raft of national responsibilities to the EU.

Northern Ireland is the backdoor which Brussels can use to gain access to interfere in UK fiscal policy, industrial strategy, regional support and almost any economic policy the Government pursues. The means by which this is achieved is simple. Northern Ireland is part of the EU’s Single Market and is subject to the Single Market rules on support for business. Article 10 of the NI protocol makes it clear that EU state aid rules will apply to the whole of the UK if Government actions affect trade between NI and the EU.

The result is that any action the Government takes to support or encourage UK industry will be subject to EU approval. If the UK Government disputed the Brussels view then the final decision would rest with the ‘European Court of Justice’ (ECJ).

This is not the end of any role for the ECJ - under the Withdrawal Agreement it will be able to:-

This affects all citizens of the United Kingdom

It is not just the citizens of Northern Ireland who should be demanding the dismantling of the Withdrawal Agreement. Everyone who voted to leave the EU should demand that the Government settle for nothing less, otherwise Brexit will not be done. Instead we will be ‘done over’.

We will not be taking back control; we will be a puppet, with the strings of many crucial aspects of our national life pulled by the bureaucrats in Brussels and foreign judges in the ECJ.

Last December the people of the UK gave their support to the Conservative Party in order finally to deliver on the result of the referendum to leave the EU. To fulfil that obligation any future agreement must terminate the one-sided Withdrawal Agreement.

Typically, the Rt Hon Sammy Wilson MP does not pull his punches in his article for Facts4EU.Org readers

He is right not to. We are now in the final weeks of the long drawn-out nonsense that has been the negotiation saga with the EU. Simple and very straightforward things need to be said. These are facts and no amount of fudging will disguise them.

Mr Wilson sets it out in fundamental terms. He emphasizes the loss of the UK’s sovereignty and the unacceptable effect on the United Kingdom if the Withdrawal Agreement is not rescinded and voided. He demonstrates that the EU’s actions will break the Good Friday Agreement. And he shows how the Northern Ireland Protocol is the ‘backdoor’ to the future control by the EU of large swathes of our national life, preventing all UK MPs from legislating in our national interests.

We would like to thank Mr Wilson for this article.

To enable us to continue publishing important articles such as this, we would like to ask all readers to make a donation today, no matter how small. We rely 100% on public donations and unfortunately less than 1% of our readers donate.

If we could treble this percentage it would make an enormous difference to what we can do to achieve a fully free, independent, and sovereign United Kingdom on 01 January 2021. Please don’t leave it to other people. If you could donate something today you will receive a warm and friendly email from a member of our team, and you will have a good feeling after having done something positive for the cause! Thank you so much.

[ Sources: The Right Honourable Sammy Wilson MP ] Politicians and journalists can contact us for details, as ever.

Well said Mr Wilson, we will not accept being a puppet on the EU's strings. Boris needs to listen or he's finished.

We will be dome over, guaranteed.
Frost is part of the scam.

Walk away from toxic May/Merkel/Robbins dreadful plan. Rip it up, do our own thing, do not accept the EU plan. NO SURRENDER.

Boris, in your attempt to emulate churchill, you managed to out do the vichy government. They loved a bit of facism too. Your betrayal is all the more dangerous because the people liked you, therefore it will become personal in their minds. Sometimes i think your advisors are trying to generate your own pitchfork party. Don't worry about it, Cressida will save you

Sammy Wilson’s party backed Brexit without understanding what Brexit meant.
He is lucky, however. Because the people of Northern Ireland will not put up with the Brexit nonsense for long. And they will vote for a United Ireland. So Mr Wilson will get his EU citizenship back. Allowing him to retire to Spain. Something he has denied to my children.
Lucky him.
Enjoy being Irish Mr Wilson.

This will be a unforgivable travesty if Boris does this to Northern Ireland.

Excellent article. Really spells it out. The WA/PD was always a massive betrayal of the British (and NI) people and should never have been signed; as most Brexiteers urged their MP not to sign, this time last year. If we are betrayed, which in my view is most likely, then never forget, and never ever vote Tory again in any election and under any circumstance.

Tear up the W/A it’s the only way to complete the dumping of the Eu and getting the freedom to govern our own country .

With NI costing Britain 11 billion a year the British will be giving it back soon. Sammy the DUP have been driven over reversed back over and driven over again by the Tories but you were too dense to see it