The BBC tucks in whilst everyone else goes hungry 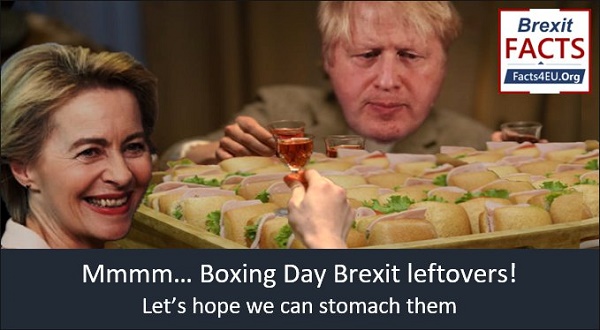 Reflections on a post-Christmas Brexit, from the Facts4EU.Org team

Had enough yet? Feeling stuffed already? We know how you feel. Yet there is one appetite which has not yet been satisfied.

We - and perhaps some MPs - have left room for what might prove to be quite a plateful. We are talking about the 1250-odd pages of the EU-UK Trade and Cooperation Agreement.

How is it possible that the BBC is already tucking in?

Unless you are the ‘Brussels Broadcasting Corporation’, no-one outside the inner circles of government has been served up the main dish of this 2020 state-controlled Brexit Christmas – the text of the ‘trade deal’. Neither you, nor we, nor most MPs. Whilst this course may prove to be somewhat indigestible, unfortunately we need to start getting into the meat of it at the earliest opportunity.

STOP PRESS: UPDATE 26 Dec, 07.45am: We now have the full 1246-page text of the agreement, finally. This has been leaked, but not yet officially published.

We would completely understand if the document were not yet publicly available. It is common for such texts to go through intense scrutiny by the lawyers for both sides, tidying it up in a process known as ‘scrubbing’. What is inexplicable and completely unacceptable is for a Remainer-dominated news organisation to have been passed a copy of the agreement and get a 24-hour head start on how they will spin it.

Are MPs happy with one day’s debate, when the EU Parliament will get two months?

There is a process laid down in statute for the consideration of all treaties which the UK intends to enter into. The relevant law is the Constitutional Reform and Governance Act (CRaG) 2010. Under this Act:

“all treaties … that are subject to ratification, acceptance, approval, the mutual notification of completion of procedures, or to which the UK intends to accede, cannot be ratified unless they have been laid by a minister of the Crown before Parliament for 21 sitting days without either House having resolved that it should not be ratified.”

This Act goes into chapter and verse about the signing of an international treaty such as the EU-UK Trade and Cooperation Agreement: who does what and why, in what order, timescales, responsibilities, etc. It is there for a reason. It ensures that proper consideration takes place of any international commitments being taken on by the United Kingdom - before they are set in stone.

With MPs to be given only one day’s debate on this major new international treaty on Wednesday next week is, in our view, a disgrace. So how is this possible?

Boris Johnson’s ‘Get Out of Jail’ card

The government can avoid this 21-day scrutiny requirement either by:

Readers may wish to reflect on the fact that the disastrous Withdrawal Agreement was passed by bypassing the requirements of the CRaG legislation. This resulted in the effective partition of the United Kingdom by the EU, leaving Northern Ireland under EU law and imposing onerous restrictions on the rest of the UK. It has been confirmed that the Withdrawal Agreement will remain in place after 01 January 2021.

UK to ratify the deal next week, EU will not do that for two months

The EU will only apply the new trade deal provisionally on 01 January. The MEPs of the EU Parliament have been given from now until 28 February 2021 to ratify the deal – a period of more than two months.

Conversely the deal will be ratified by the UK Parliament next week, given that Sir Keir Starmer has already confirmed that Labour MPs will vote in favour, before any of them have had the chance to read it.
Photo left: Sir Keir Starmer kneeling to Black Lives Matter

This will give the Government the majority it needs, almost regardless of how many Conservative ERG members vote against.

At Brexit Facts4EU.Org we are not big on bureaucratic procedures. This is one of the many reasons why we are unimpressed with the EU machine. That said, there are some procedures which are there for a good purpose.

In this case we believe it is essential for MPs to have sufficient time to scrutinise and debate this new ‘trade deal’. At some 1,250 pages, this needs time. For this to be rushed through after more than four-and-a-half years since we voted to leave the European Union is a travesty.

Surely there must be the wit and wherewithal in Whitehall to do what the EU is doing: apply the deal provisionally and then take many weeks to allow for proper scrutiny, before ratifying it?

And as for the BBC…

Will there be a Whitehall enquiry into how the Remainer-dominated BBC has copies of the full text of this agreement, in advance of it being released? We certainly think there should be.

Do you have any Boxing Day leftovers?

We know times are difficult for many people this Christmas. Covid has affected us all, and it has definitely affected the level of donations we receive from members of the public. With no other source of income, we rely on our readers to keep us going.

We are most grateful to readers who have donated in recent days, but we badly need more readers to do the same if we are to continue researching facts, scrutinising, publishing, and lobbying MPs. Quick, secure, and confidential donation links are below this article, or you can use our Donations page here. If you have never donated before, please, please, keep us going with a donation now. Thank you so much.

[ Sources: UK Parliament | EU Commission ] Politicians and journalists can contact us for details, as ever.

Kneel Starmer knows it isn't really leaving the EU and also knows the Tories will probably now lose the next GE so will be planning a major campaign to re-join the corrupt of Brussels at the earliest opportunity at much increased rates and with high hopes of getting a seat on their so much more luxurious gravy train in the future. That's the problem with having two different but similar sets of corrupt self serving parasites in Westminster.

Paul Taylor you're 100% correct, and yes, any true Brexiter will not vote for the Tories!
Which will open the door for the other corrupt party!
So disappointed!

Can anyone explain to me how this is a good deal, because as far as I can see it only really benefits the EU.
The EU has a large surplus in the trade of goods with the UK and there are zero tariffs and quotas in the deal and a degree of mutual recognition of standards.
The UK has a large surplus in the trade of services with the EU but there is absolutely nothing in the deal for services. No passporting rights and no mutual recognition of professional qualifications.
This has been spun as a great success for Britain but I cannot see it as anything else but damaging.

Any MP worth their salt should vote against this until proper scrutiny has happened. The UK should go to WTO until this has been passed in the proper manner. If Parliament is only getting one day debate then that is not taking back control.

Like the EU are doing the MPs should pass this provisionally so there is continuity from 1st January, yet allow the wrinkles to be exposed. The EU are likely to have be unhappy with some parts too. We can then negotiate the final terms as Addendums to make both parties happier, or walk away if necessary. 1st April should be the new deadline.

Starmer is playing the political game, without having seen the details (unlike the BBC) he is saying it is a poor deal, but, will whip his MP's to vote for it. For the good of the Country of course, the hypocrite.
He seams to forget that Corbyn made life hard for Theresa May, dragging out the completion of Article 50, and giving Barnier and the Commission the impression they could demand whatever they wanted.
Question: If the agreement is only provisional on behalf of the EU Parliament, can they demand changes before passing it?
I await the conclusions of the ERG Star Chamber.

Johnson, along with anyone else in parliament who pretends to have read and understood this agreement in the few days that are available for its scrutiny and subsequently votes it through, should be charged with gross negligence in the course of their duties.
In this instance, there will be more than a fundamental failure to exercise the caution demonstrated by the EU 27’s approach to this agreement. The ‘ayes’ in Westminster will be not only cognisant of the risk they are taking, but also, in their slipshod approach to the process, be fully aware of the reckless abandon and indifference they demonstrate in their inapt approval, that full and proper scrutiny over time would avert.

Its a hobbling deal designed to frustrate, leading to a new referendum in 5 years.
And all the while we are still paying for the biggest ponces in Europe to plunder sovereign resources, macron and his mouth. . No return of the heavy industrial complex. No fishing. No Singapore on thames. The people voted for these opportunities to return home. They're staying in Europe. Oh and there will be no diversion from the echr. So plenty more robbers and rapists cant be deported.

I am going to wait and hear what Bill Cash has to say!

Thank you for your excellent journalism in these murky waters, it's much appreciated. Subscribtion set up to help fund your continued efforts in 2021. All the best.