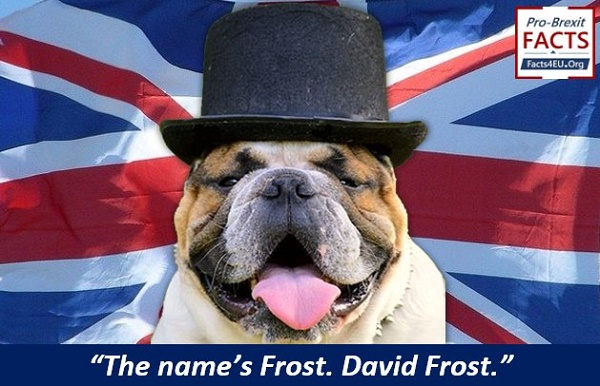 On Friday Monsieur Michel Barnier, Chief Brexit Negotiator for the EU, delivered a statement following the end of the latest round of negotiations on the future EU-UK trade deal.

And so upset was he, that we can only
applaud the UK’s Brexit team for what was clearly an outstanding performance last week.

Possibly one of the most cheering Government statements last week came from David Frost, Boris Johnson’s EU Adviser and Head of Brexit trade negotiations with the EU.

Yes, we know Mr Frost misguidedly voted Remain in the Referendum but unlike his predecessor Ollie Robbins, we believe that Mr Frost is now actively working for Brexit, not against it. 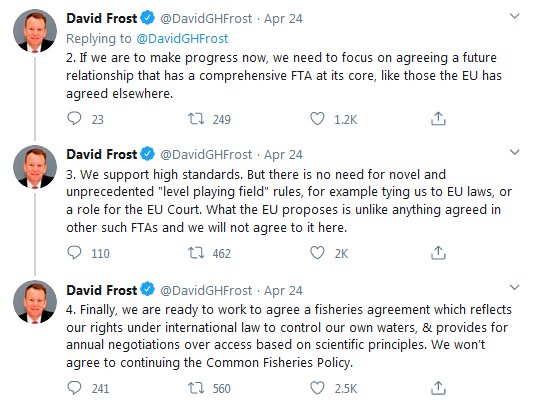 This is wonderful stuff !

For years Brexiteers had to endure the weak, negative, and embarrassingly-defeatist bleatings from Theresa May about how the EU “would not agree” to something. This week we had the ‘new regime’ continuing to make it abundantly clear to Monsieur Barnier that much of what he is talking about isn’t even in the room, let alone on the table.

The official statement out of No.10 on Friday reinforced the tweets from David Frost. Compared to Monsieur Barnier’s version this statement is short, sharp and to the point.

Not only does the statement contain none of the woolly nonsense which came out of No.10 under Theresa May’s tenure, but it puts the British case strongly, uncompromisingly, and in “clean Brexit” terms.

Official statement from No.10 Downing Street
Round Two of UK-EU negotiations

“This was a full and constructive negotiating round, conducted remotely by video conference, and with a full range of discussions across all the issues, on the basis of the extensive legal texts provided by both sides in recent weeks.

“However, limited progress was made in bridging the gaps between us and the EU.

“Our assessment is that there was some promising convergence in the core areas of a Free Trade Agreement, for example on goods and services trade, and related issues such as energy, transport, and civil nuclear cooperation.

“We regret however that the detail of the EU’s offer on goods trade falls well short of recent precedent in FTAs it has agreed with other sovereign countries.

“This considerably reduces the practical value of the zero tariff zero quota aspiration we both share.

“There are also significant differences of principle in other areas. For example we will not make progress on the so called "level playing field" and the governance provisions until the EU drops its insistence on imposing conditions on the UK which are not found in the EU’s other trade agreements and which do not take account of the fact that we have left the EU as an independent state.

“On fisheries, the EU's mandate appears to require us to accept a continuance of the current quotas agreed under the Common Fisheries Policy. We will only be able to make progress here on the basis of the reality that the UK will have the right to control access to its waters at the end of this year.

“We now need to move forward in a constructive fashion. The UK remains committed to a deal with a Free Trade Agreement at its core. We look forward to negotiating constructively in the next Round beginning on 11 May and to finding a balanced overall solution which reflects the political realities on both sides.”

The above statement contains 313 words, compared to Monsieur Barnier’s statement of 2,335 words. We dissect M. Barnier’s and the EU’s statement in the second part of this article tomorrow – do NOT miss it!

“Ding ding!” End of Round Two

Oh joy. A British civil servant and a British Government actually standing up for a free and independent United Kingdom? Hallelujah!

No.10 actually uses the phrase “we have left the EU as an independent state”. And good grief, we even have a Head of British Brexit negotiations who said:

“We support high standards. But there is no need for novel and unprecedented "level playing field" rules, for example tying us to EU laws, or a role for the EU Court. What the EU proposes is unlike anything agreed in other such FTAs and we will not agree to it here.”

This is dynamite. It’s music to our ears. This is our Edward Elgar to their Ludwig von B.

Yes, but is any of this true?

Regular readers know that we have been at this game for a long time. We are hardly naïve, new kids on the block. In fact our reputation is for being cynical when others were not.

For example we lost many readers when we started attacking Mrs ‘Remayner’ May and hammering her Remainer Chancellor Hammond back in 2016. We could see exactly what was coming and we were not wrong.

We will continue to monitor all UK Government and EU announcements like hawks, until our money runs out completely. We trust no-one when it comes to Brexit – democracy has been betrayed far too many times over recent years.

That said, we thoroughly enjoyed the comments from David Frost and the statement from No.10 this week. In these difficult times we hope that this article has cheered up your lockdown Sunday as much as possible!

Please come back tomorrow for Part Two of this article, where we take apart Monsieur Barnier’s and the EU’s statement on the talks last week. We think you will enjoy that…

P.S. We hate to ask, but if you haven’t already donated to keep us going, now would be a great time to do so! If you value free speech and want to see a fully-free United Kingdom, then you’ll find quick and secure donation methods below this article. It’s confidential and you’ll get a nice email from one of our team. Thank you so much!

[ Sources: David Frost Twitter | No.10 Press Office ] Politicians and journalists can contact us for details, as ever.

Refreshing developments for sure. Thank you for reporting on this.

If your intention was to cheer me up on yet another Sunday being stuck indoors, you succeeded!
Thanks guys.

I cannot see a trade agreement being achieved, the EU have set out what they want (unachievable), but have not said what they will accept. To set the terms as though we are still in the RU is ludicrous. How much Macron backs down on Fisheries remains to be seen.
We will end up on WTO and a few packages will be agreed. Cross channel transport (Eire uses it as a land bridge) arrangements will be agreed. In Aviation a new ICAO Air Service Agreement between the UK and the EU will be signed replicating the preexisting one.

With regards to fisheries, it should read, we will control our own waters. Not, we will have the right to control our own waters.
Tiny bits like that still don't fill me with confidence.
Although this statement is the best news we have had for a few years on this and I'll take it.
Can't wait to see what crap barnier spouted tomorrow.
He who Laugh's last.

On fisheries we now have the opportunity to rebuild the national fleet and create a substantial new business selling OUR fish to the EU. It will earn the exchequer a great deal and help our government offset its massive current expenditure. We need total control of our waters and its fish so that we can regulate the breeding and extraction of fish to preserve our stocks and keep them healthy. We can never do that of we allow foreign boats to take whatever fish they want, so let them go south to fish whatever they can find in their own waters. BRITISH WATERS FOR BRITISH FISHERMEN.

Yes, good news indeed to hear of the current approach & a degree of positivity to date on the trade front. The bad news, or one aspect of such, is what the UK's ongoing financial liabilities might look like in both the near and distant future. As is already known, we face the £39bn gift to the EU. We have a share within the European Investment Bank (EIB) & a number of billions unlikely to be returned to us ( covered in past UK press reports ) and also, under what is termed Joint & Several Liability we could be faced with some future hefty bills. There is a short & recent video ( Nigel Farage, Ben Habib & Jake Pugh ) available to view which hammers home some basic info on this on the Brexit Party.org website.

5 Proudfoot Properties, it is precisely the lack of any positive action to even prepare for reinvigorating the fishing fleet & fishing communities that concerns me. We're hearing lots of positive words but seeing no complementary Governmental action/help that reinforces any actual intention of taking back control of our territorial waters.

Hope UK team keep up the pressure and take no flak from Barnier or his cronies. They've had the upper hand long enough when they were dealing with appeaser may! It's a different ball game now under Boris, he will meet them head on. We want a free trade deal with no strings attached and we keep control of our fishing waters. They've been plundered long enough! Nothing less is acceptable. If we can't have that , we walk! Simples!

The Union flag on the top of this article is back-to-front. Shame.

Replying to Nick, comment 9.
Thanks Nick, quite right. The background flag came from a free photos site. We should have picked up their error, but it was 5am on Sunday morning when that tile was created and we didn't spot it.
Apologies, now corrected.