Tusk: “No stable and safe Europe without the integration of all the Balkans in the EU” 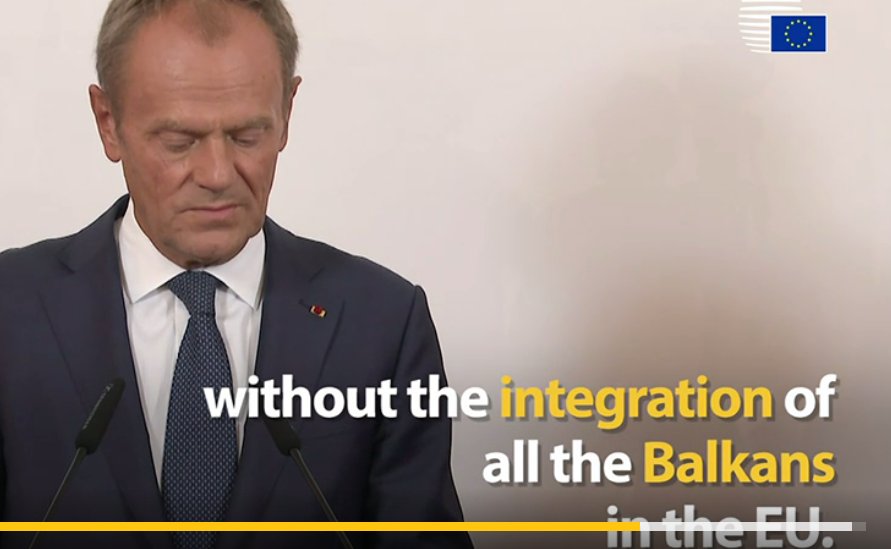 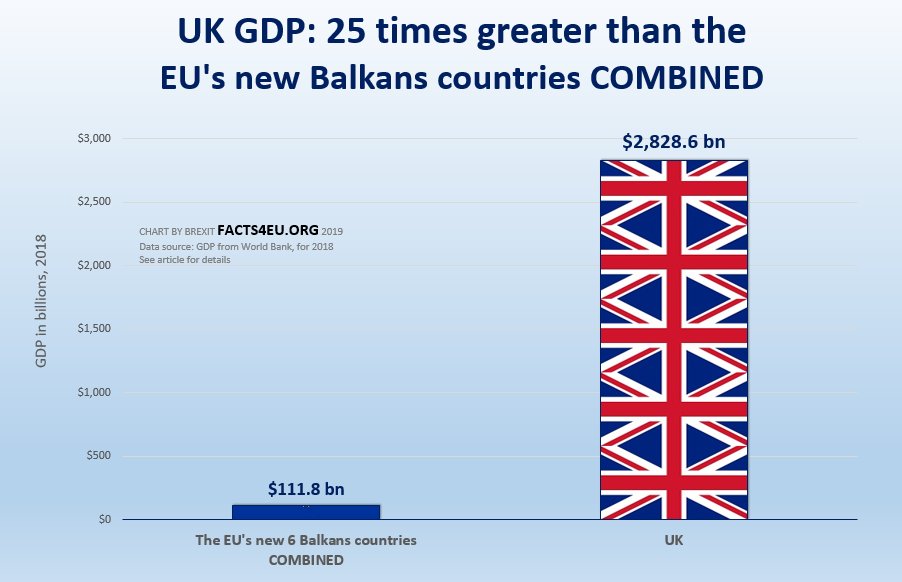 More proof that ‘Remain’ is far from being the ‘status quo’

On Tuesday last week, President Donald Tusk of the EU Council – the EU’s highest decision-making body – visited the capital of Albania and made the following extraordinary announcement :-

“There will be no stable and safe Europe without the integration of all the Balkans in the EU.”

This follows a previous statement by the EU’s de facto Foreign and Defence Secretary:-

“The big loser of the game that currently is being played will be the UK.”

“When we talk about the future of the EU, we have to take into consideration that countries especially in the Western Balkans will eventually become members of the European Union so we will be more than 27.”

When the EU's intentions come to pass,
the EU will lose one country, add six,
and lose $2.72 TRILLION dollars of GDP per year

There are six Balkans countries: 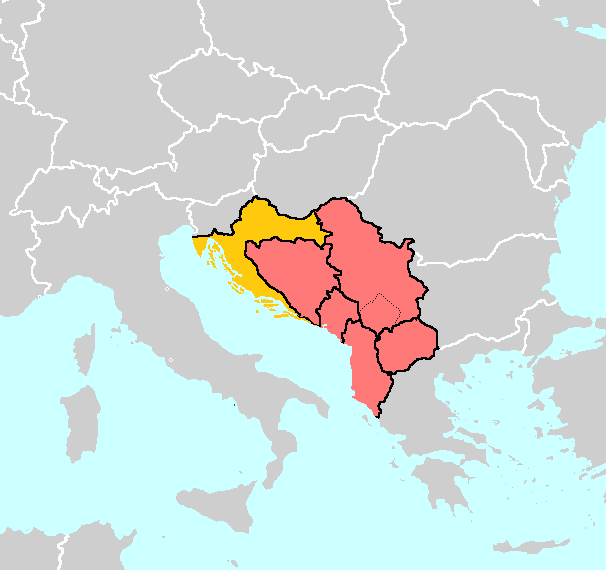 Very broadly speaking, the six Western Balkans countries are situated north of Greece and south of Croatia, Hungary, Romania and Bulgaria. They ‘fill in a gap’ in the map of EU member states.

Brexit Facts4EU.Org thought readers might like to compare the economies of these six Balkans countries against the economy of the departing United Kingdom.

No, Remain MPs, this is not ‘fake news’, it comes from the EU itself

Remain MPs might like to know that the EU has been planning the accession of the six Balkans countries into the EU for over 15 years. The EU already has Stabilisation and Association Agreements (SAAs) in force with them all.

Four of the countries are official candidates for EU membership: Serbia, Montenegro, North Macedonia, and Albania. It was in Tirana, capital of Albania, that EU Council President Donald Tusk was speaking last week. The other two Western Balkans countries have been promised the prospect of joining when they are ready.

Since the UK’s vote to leave the EU, this process has been accelerated

“We’re having some very difficult negotiations in Europe on Brexit, and this really is an opportunity for us to bring the Western Balkan peninsular on board as the UK withdraws from the EU.”

The ex-Communist de facto EU Foreign and Defence Secretary has also been heavily involved. Here is Federica Mogherini at the World Economic Forum in late 2017, explaining how the EU would soon replace the UK with the Balkans:

“The big loser of the game that currently is being played will be the UK.”

“We always think the EU future will be the 27. Actually we are negotiating accession with several countries.”

“When we talk about the future of the EU, we have to take into consideration that countries especially in the Western Balkans will eventually become members of the European Union so we will be more than 27. The power of attraction of the EU is still extremely strong.” 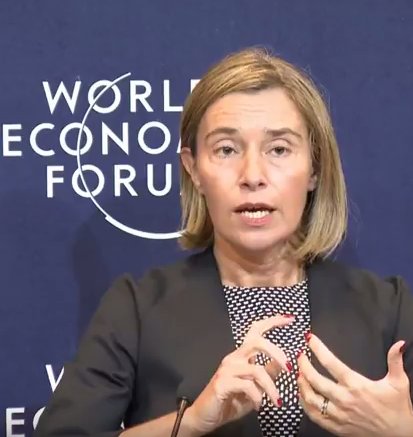 Donald Tusk’s speech in Albania last week went unreported in the UK, as with so many news items which might portray the prospect of remaining in the EU in a bad light.

This is a very difficult region in many ways, torn apart following the break-up of Yugoslavia, and the scene of foreign policy and military disasters for the EU. Given the geographical proximity it is still felt by many that the EU’s actions (and inactions) did not constitute its finest hours.

Readers will no doubt wish the six Western Balkans countries well in their gradual development following some difficult decades. Crime and corruption is still endemic and it is hoped that this will improve eventually. The UK of course has been a significant global player in the region and still is, although we look forward to the day when the British Foreign Office is not hidebound by the foreign policies of the EU and can act with complete independence.

A great deal of UK Aid has of course been sent to the region over the years. Some of this aid has been 'badged' as EU Aid, but this will change once the UK has left the EU. In due course recipients of British donations will realise just how generous the UK is.

In the meantime, we wish the EU well as they try to sell the idea of six poor countries joining the EU to the taxpayers, in order to replace the fifth-largest economy in the World.

[ Sources: World Bank | UN | EU Commission | EU Council ] Politicians and journalists can contact us for details, as ever.

Greece was an economic basket case that defaulted on its EURO debts. It never met the conditions for Euro membership.
Do these six keep their own currency, or will their usage of the Euro be fiddled?
Does the German Taxpayer know the financial commitment their Chancellor is undertaking on their behalf, in the expansion of this 21st Century Empire.
Whatever happened to the Austro - Hungarian Empire and Yugoslavia.

One of the most disgraceful & overt signs that May & her Govt had no intention of leaving their EU masters was HOSTING, in London, in July last year the summit for the accession countries to encourage & extol the benefits of EU membership, all whilst supposedly negotiating our leaving the political organisation. It totally demonstrated that she, & our Govt, were just puppets of Brussels. I'm sure that they enjoyed arranging the humiliating 'event'.
I do hope the net contributors are prepared to stump up for invariably net recipient countries, in addition to plugging the hole that our 'contributions' made, particularly as the EU appears to have increased its budget for the 27.

Their population will be further reduced when their most economically active people leave to seek work in wealthier EU nations. However the question is where is the money coming from to beef up these country's economies. Quite likely we will be paying because it will be classed as one of our "commitments". Also we can expect Balkans migrants because the commitment to substantially reduce immigration just is not there. The "test" to see if they are suitable will go like this: "will you work for buttons?", answer, "yes", Uk official: "right you're in".

The intention is and always has been,to include Russia in the EU. Gorbachev opined
'Our vision of the European space from the Atlantic to the Urals is
not that of a closed system. Since it includes the Soviet Union, which reaches
to the shores of the Pacific, it goes beyond nominal geographical boundaries'.
'I look forward to the day when Russia is a fully-fledged member of the European Community
JOHN MAJOR, the former British 'Conservative' Prime Minister, spouting Russian policy in his 1992 New Year's Day broadcast on BBC Radio 4.
The Balkans are a step towards that, and a threat to NATO.

Will these 6 countries be net contributors to the EU budget? No thought not.All very poor undeveloped countries,where corruption is a way of life, needing infrastructure construction and monies from the richer EU contributing countries.All you need to know is Tony Blair has been a paid advisor to the Albanian government to prepare them for joining the EU.You wonder why he wants the UK to stay in the EU its all the monetary contributions that the UK makes.

they are welcome to Our place in the EU good riddance

All proposed nations are main supporters of Islamic ideological values-Albania in particular is the main front for Trafficking gangs who operate successfully out of that region. The EU will have to deal with such people whether they want to or not. As for this Federica Mogherini, who has been pernicious in her dealings with the UK, is certainly a reason almost above anything else this nation should steer away from the EU. Mogherinin together with Von de Leyen are from what I have gathered in accord with the policy of establishing a European Union joint armed forces, which if the UK were to remain in the EU, would become part of this force, and irrespective of the fact that Britain once with its allies defeated the Nazi’s, could find this joint military force commanded by a German General-unlikely to be a British General. The EU are terrified of Russia, trembling in their shoes as to what policy of alignment Putin might put before them. As it stands Europe I suspect could not stand alone against Russia without the UK/USA.

''The power of attraction of the EU is still extremely strong.”
Yes, of course it is. It's known as ''money''.
And I suppose with all these additional countries, the EU Empire will have a huge supply of young people to call upon as conscripts to their new (non existent, of course) army.

Here is a 'Man of the Balkans' speaking:
-
https://www.youtube.com/wat...
-
The 2016 video taken during the vote count has resurfaced as Ms Swinson announced the Liberal Democrats will revoke Article 50 if they get into power. In the video, Lord Ashton, who died in 2018, said it is the duty of politicians to carry out the referendum vote whatever the outcome as the democratic system cannot run if politicians don’t accept the democratic judgement. It resurfaces as Ms Swinson has faced huge amounts of criticism calling her “undemocratic” for plans to revoke Article 50 despite 17.4million people voting to leave.
-
Speaking to ITV news after polls closed on the Brexit vote, Mr Ashdown had said: “Those who asked for this, and I was the first leader ever to ask for a referendum in 1989/90, have said so because they believe in the act of democracy.
“I will forgive no one who does not accept the sovereign voice of the British people one it has spoken whether it’s by one percent or 20 percent.
“It’s our duty to serve the public and make sure our country does the best it can with the decision people have given us.
“I’ve heard Mr Farage say tonight, ‘we’re coming back even if we lose’. He’s the person who complained about a lack of democracy in Europe.
“If he will not accept the sovereign voice of the British people when they vote, whatever they say, then I think he does not have the national interest at heart, he’s got his own interest at heart.
“For all us, in or out, when the British people have spoken you do what they say, they command it.”
Mr Ashdown continued: “You put the national interest first either you believe in democracy or you don’t.
“When democracy speaks, we obey. All of us do. If you put your nation first then you make the best of it you can from the decision you’ve got.
“If you’re disappointed one way you still apply yourself. You cannot run the democratic system unless you accept the democratic judgement.”

Problem is 🇦🇱 as its NATOs drug depot from its Afghan war. Will undermine Holland and its marijuana status. Plus will have to have extradition with rest of 🇪🇺. Won't be easy to achieve for the Columbia of Europe...