These non-EU and non-EEA countries sold £1.6 TRILLION of goods to the EU in 2017 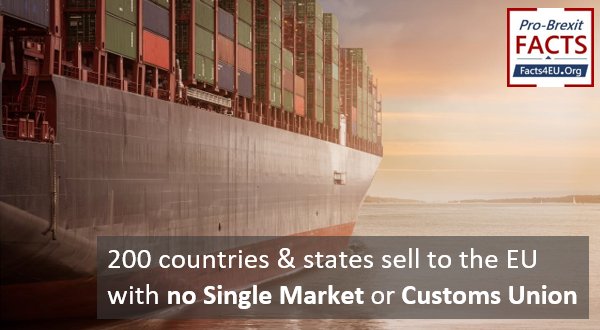 How on earth do all these independent countries and states manage it?

Today Brexit Facts4EU.Org explodes the myths from Remainer MPs and parties about the EU’s Single Market and Customs Union. We present some simple facts which come from the EU Commission itself.

207 non-EU, independent countries and states sold products to the EU
worth €1.58 trillion pounds in 2017 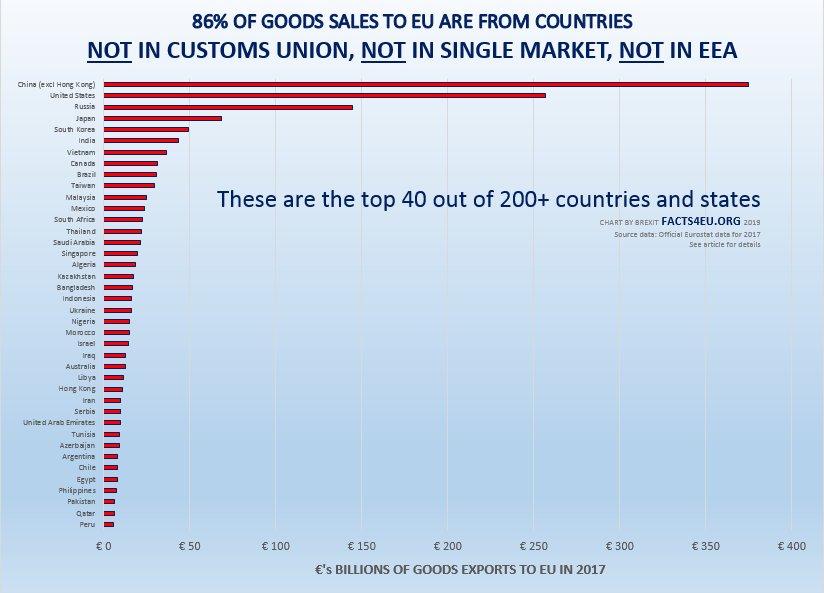 These countries are successfully selling to the EU

Where does our research come from?

Brexit Facts4EU.Org conducted research into the trade figures for 2017 from the official statistics body (Eurostat) serving the EU Commission. Eurostat’s list includes everyone from little islands to the major economies such as China and the USA.

Technically some of the small islands are not on the United Nations’ list of recognised countries, but they’re on the EU’s official list of states so we’ve included them. We always use EU data wherever possible, to give Remainer MPs nowhere to go.

In order to give readers a very clear picture of how possible it is to sell into the EU without being part of its apparatus, we then excluded EEA and EFTA countries (Norway, Iceland, Liechtenstein, Switzerland) and those with some form of close relationship, such as Turkey and others. In other words we looked at all the countries selling into the EU perfectly successfully, without any EU complications.

The UK can be one of these normal, independent countries

If the vast majority of global sales into the EU come from countries which are not members of the EU’s Single Market or Customs Union, why shouldn’t the UK become one of them?

If over 200 countries and states can do it, why can’t the United Kingdom? This is the NORMAL way of selling to the EU.

It is a sad fact that for years MPs have been standing up in the House of Commons on a daily basis, telling the British people that membership of the EU’s Single Market and the EU’s Customs Union is essential.

This Brexit Facts4EU.Org report, based on analysis of official EU data, shows clearly that this is not the case.

The vast majority of sales into the EU are from normal, independent countries over whom the EU does not have the dominance and control – nor the punishment - which it has been attempting to impose on the United Kingdom since it voted to leave.

Trading with the EU like the rest of the World is normal.
Coming under its thumb is not.

It's early Saturday morning. The article above has taken a lot of work overnight. You don't get this kind of information anywhere else. If you would like us to keep researching and publishing we really need your help. Quick and secure donation links are below. Thank you.

[ Sources: Official EU data - Eurostat ] Politicians and journalists can contact us for details, as ever.

One wonders, in the past, how much of China's sales to the EU were steel (dumping). The EU did diddly squat about this, to defend steel businesses in EU member states, such as British Steel. Tata Steel has cosied up to the EU. Wrong call. Sir Ian Wood, Scottish oil tycoon (£billion or so), has now said - just yesterday -he would vote leave, citing the direction the EU is taking. Haven't Facts4EU and the rest of us been pointing this out for years? what have they been reading? All they had to read was Facts4EU and EU literature itself.

With regards to:
These countries are :
Not paying billions of pounds per year for access
Not having EU laws imposed on their parliament and their people
Not having EU regulations imposed on all their businesses, whether they sell to the EU or not
Not accepting 3.8m EU citizens into their country
Not allowing the EU to try to take part of their territory
Not allowing the EU to take most of the fish in their territorial water
It is perhaps worth reminding readers of BrexitFacts4EU factsheet 7: Boris's new 'UK Colonisation Treaty''. https://facts4eu.org/brexit...
-
Under Johnson's Withdrawal Agreement not only will we continue to pay billions of £s to the EU, continue to have laws imposed on our parliament, people and businesses, have our defence and foreign policy compromised, our tax policy and ability to make trade deals compromised, and our fishing rights sold off; but too, Johnson has made it clear that he is prepared to sell out Northern Ireland, and has little intention to effectively curb immigration. The Conservative Party is a Remain party at heart - it has no intention of delivering the 2016 Referendum result to Leave in anything but 'in name only'. Why else do you think 3 and a half years later Brexit has not been delivered?
-
If you want Brexit then in all circumstances, where you have the option, vote for The Brexit Party. That is the only chance we have to Leave the EU properly (and then, hopefully, we will never sign up to Johnson's treacherous Withdrawal Agreement [aka Surrender Treaty] in the first place - if Farage get's enough seats, he will kill this WA off from Day 1 of the new parliament).

It is perhaps worth reminding readers of this independent polling company again (with Brexit Party gaining 24 seats):
https://www.polls.uk/politi...

Thank you James Bertram (3) - an interesting website indeed. I do so hope and pray that the Brexit party get even more than 24 seats,

Interesting projections on those polls James. Much better for the Conservatives than other poll results I have read about.
Of course, I am hoping TBP get more and from the perspective of Brexit it would be better if they get more from the Conservatives, so TBP have much more leverage in the Government.

I too hope that the BP manage a few seats. I admire their message of the need to 'Change Politics for Good' In terms of future trade & looking east, I thought this article may be of interest from the Bruges Group website dated 29 November 'The Future is East, Time for Electoral Realism'(www.brugesgroup.com)

Seems EU now "looking" at the Chinese proposal re British Steel purchase.... State Aid concerns etc., For info another article re Trade to be found on Briefings for Brexit site - 30 Nov: Titled " Don't be fooled: a 'bare bones' free trade deal is exactly what the UK wants" Also, I & many others out there no doubt always looking for info on Defence aspects after Brexit as we hear nothing about these things from our politicians, so, also worth a read on the same site dated 30 Nov: "News from the Front: The Big Push is On" All these ridiculous TV station so called Election Debates going on and we hear nothing on so many subjects, just the same old rhetoric.