EXCLUSIVE: Why is a “trading bloc” spending £110 BILLION of taxpayer money outside its borders?

Brexit Facts4EU.Org busts the myth that the EU is about trade and the economy

“No deal”, “crashing out”, “cliff edge”, “destroying our jobs and economy”…. Does this sound all too familiar? Remain MPs can’t seem to stop talking doom and gloom about the UK’s exit from the EU on a clean, managed WTO-terms basis.

These MPs’ threats – unsupported by any facts - relate to British people’s jobs and the economy. But what do the Remain MPs really know about the EU and what it does? Here we provide just one example of how the EU is about the pursuit of power, not looking after the financial wellbeing of British and other EU citizens.

The EU spending the UK’s money outside the EU

The unelected EU Commission drew up its budgetary plans one year ago, for the post-2020 period. Whilst these are still going through the review and approvals process, it is unlikely that they will change much from what we are showing below.

These are monies coming from taxes of EU citizens of the few countries who are net contributors to the EU, including the UK if Remain MPs get their way, and they will all be spent outside the borders of the EU.

Important note: There are many more funds which will be spent outside the EU’s borders, so consider this to be a very conservative summary. We are only reporting on one substantial budget item coming under the control of the ‘European External Action Service’, led by unelected former Communist and EU Vice-President Federica Mogherini.

Where is the EU planning to spend all these billions?

To keep things simple we will only cite the two biggest elements of this ‘External Action’ budget, which together make up 84% of the total.

Where is the EU spending your money? 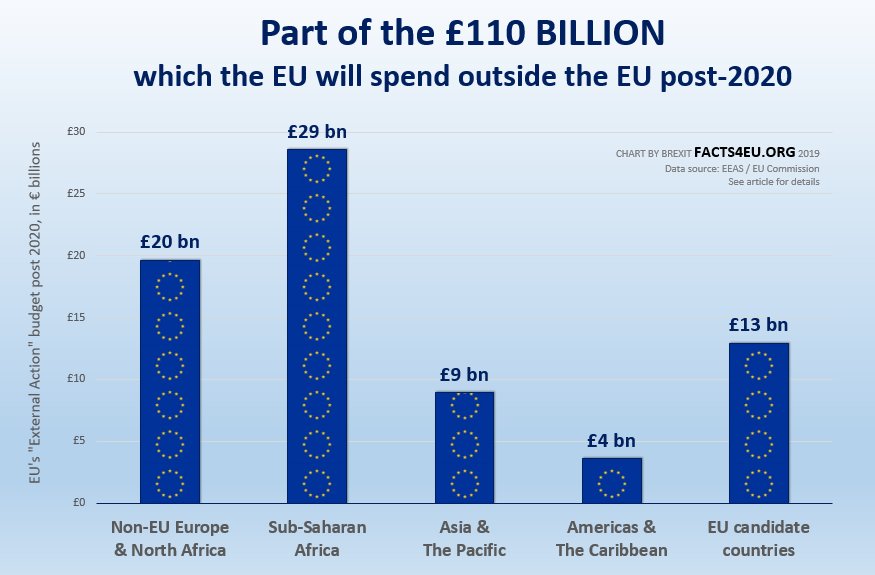 Note: These figures above vary slightly, according to which EU document you are looking at.

Who controls this vast budget?

The operational control of this budget currently falls under the EU’s ‘European External Action Service’, an organisation headed by a woman with many job titles.

Italian Federica Mogherini was appointed by Jean-Claude Juncker. She is an EU Commissioner and one of the two Vice-Presidents of the EU Commission. She is also ‘High Representative of the European Union for Foreign Affairs and Security Policy’. In effect Ms Mogherini is the de facto EU Defence Secretary, EU Foreign Secretary, and EU International Development Secretary all rolled into one.

Federica Mogherini is the most powerful woman in the whole of the EU’s massive bureaucracy. She was appointed to her EU roles, never elected.

Yesterday we published an article on the way in which the UK taxpayer is forced to subsidise poorer countries in the EU. Today we have revealed how the EU also takes UK taxpayer money to satisfy its agenda for global power outside its own borders..

This is about unelected Brussels bureaucrats and their pursuit of personal, global power

The EU has something called the ‘European Union Global Strategy’. Remain MPs may not have heard of it. They certainly haven’t been given the opportunity to debate it in the House of Commons.

Readers might think that this is something of... how shall we put this politely... an omission? They might quite reasonably think that if the EU is to have global ambitions, then our MPs would have been consulted and would have been able to contribute to the formulation of this strategy.

But isn’t the UK one of the three biggest donors of international aid anyway?

Yes it is. In fact for decades the UK has been the second most-generous country in the world after the USA, according to the official figures from the OECD who monitor these things.

It was only last year that Germany pipped second-place from the UK, but only by virtue of including some of the costs of integrating its influx of c.2 million migrants into Germany. We do not consider this to be international aid. We consider it to be the cost of Angela Merkel’s disastrous 2015 policy of opening its borders.

Whither sovereignty and democracy?

The British people voted in 2016 to take back control. A key aspect of the Brexit vote – the largest in British political history - was about sovereignty and democracy.

If and when the Government finally delivers Brexit, it will mean that decisions about where the British people should devote some of their wealth will be made by their elected representatives in Parliament, not by some unelected bureaucrats in Brussels whom most ordinary people have never heard of.

Researching, writing, and condensing the facts into a readable article for ordinary people and for MPs takes many hours and often days. We don't have big corporate donors like George Soros. We rely on ordinary people like you. If you can help us with a donation today we can keep going. Please don't leave it to other people. You ARE 'other people'. Quick and secure donation methods are below. Thank you.

[ Sources: EEAS | EU Commission | OECD ] Politicians and journalists can contact us for details, as ever.

No such thing as an ex-communist!

'NO DEAL'
The good news reported by the Guardian 13th June. A senior Tory MP has said parliament has now run out of options for preventing the UK from crashing out of the EU.
Oliver Letwin, was among the signatories to a Labour-led attempt to tie the next prime minister’s hands by ruling out no deal, it was defeated by 11 votes.
Letwin said, “We have run out of all the possibilities that any of us can think of.”
BBC Radio 4’s Today programme interviewer Nick Robinson pointed out that MPs could not block a no-deal exit happening by default if no legislation was put before parliament.
Current extension ends on 31st October.

Its called Empire building, the EU like the Chinese wants to colonise Africa.The EU are colonising African countries using the taxes from western developed European countries. The countries of Africa will provide the cheap labour, to enable multinational companies to strip these nations of their wealth.The African leaders of course will be invited to join the unelected EU elite to share in that prosperity.

Concerned for Europe, you are so correct! There are plenty of these so-called ‘ex’ communists in the Labour Party with Jack Straw being a famous example. No wonder he didn’t ever bother to control our borders and said, “the English are not worth saving”. John Reid was another.
As for the Tories, whilst few ex communists have joined them they have a lot of allegedly ex Liberal Democrat Party, Liberals and Social Democratic Party types within them like the now supposedly Tory MP for the true blue town of Royal Tumbridge Wells. Is it therefore really all that much of a surprise then that the Conservatives are embracing social liberalism and globalism to ever more absurd lengths and are now just the rich man’s Liberal Democrat Party?