Without a quick & clean Brexit, UK is on the hook for up to £394bn of EU’s debts 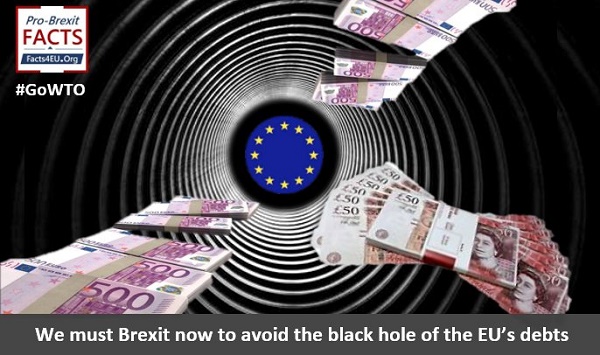 The failing Eurozone could plunge the UK into 10+ years of austerity, unless it leaves now

A Brexit Facts4EU.Org explainer – the hidden menace of failing to leave on 31 October 2019

Mention money markets and global finance and most people’s eyes glaze over. We ask readers to stay with us for a couple of minutes while we summarise in layman's language the very real risk of a long period of austerity, caused by the EU’s out-of-control financial system.

A new 40-page study published by Global Britain makes the EU’s claim for a £39bn divorce payout from the UK seem like small change. It could be 10 times that amount.

What’s the problem and why haven’t you heard about it?

Firstly, readers will know that the UK is not in the Eurozone, despite all the ‘experts’ telling us we had to join in 1999 or become an economic basket case.

Unfortunately, thanks to successive UK Government decisions, being out of the Euro has not meant that the UK is exempt from financial liabilities for the EU’s attempt to create one currency for the whole of the European Union.

Please scroll down to download the full report. Note: We have converted figures to pounds at £1=€1.12. 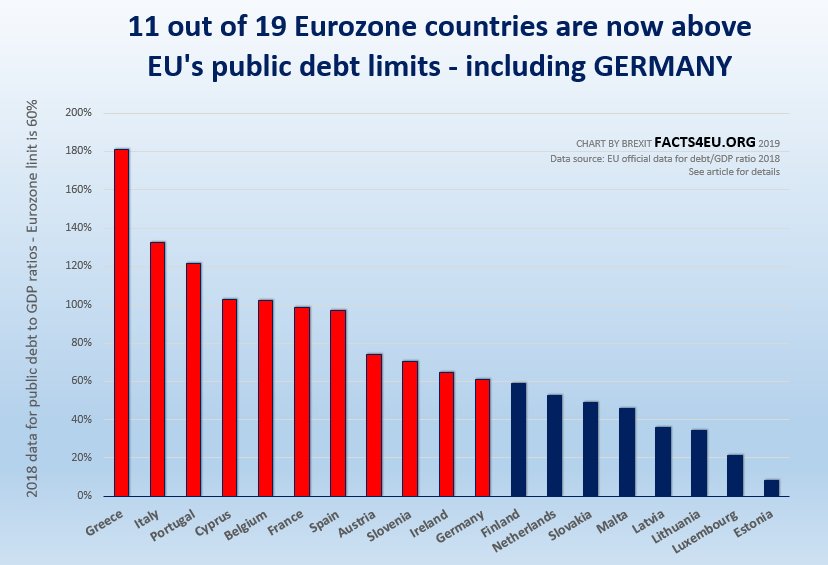 The full report contains a great deal of detailed information and does not pack its punches. Below we give you some highlights from the report and from extra information with which we were provided.

Some highlights from the Global Britain study

Yesterday evening the Daily Telegraph published a piece about this, adding that Conservative Party constituency chairmen and senior Tory officials will be receiving a letter urging members to support a new Prime Minister who is “committed unequivocally” to backing a clean WTO-based Brexit.

This clean Brexit would avoid having to pay the massive contingent liabilities to the EU, as described above.

The letter comes from the Brexit Coalition, a loose grouping of 29 pro-Brexit organisations of which Brexit Facts4EU.Org is a leading member.

Our President, Daniel Hodson, former head of the London International Financial Futures and Options Exchange (LIFFE) and current Chairman of The City for Britain, explains that:

“The Brexit Coalition is uniquely broad, deep and non-partisan as well as being united. Every day now seems to bring a good reason for our leaving the EU.

“Our defence and our fishing are both iconic and under threat.

“And why should we bail out the Euro project, which seems increasingly doomed?”

For the economic heavyweights amongst our readership, you can download the full, 40-page report here. It is an impressive piece of work.

The study’s author is Bob Lyddon who has written extensively on the Eurozone financial system and the UK’s risks under it.

He has acted as an expert witness in international payments-related cases, and has been retained by trade associations and industry bodies to advise on access to banking facilities and payment systems. From 2003 to 2016 he was general secretary of the IBOS international banking alliance. With PwC he managed several programmes at the time of the initial introduction of the Euro, and has consulted for Bank Boston, Chemical Bank/Manufacturers Hanover and for Lloyds Bank International.

For most readers, leaving the European Union is about issues of sovereignty and democracy. That said, the economic arguments are powerful and should be aired.

The study by Bob Lyddon of Global Britain makes for disturbing reading. We have done our best to crystalise his detailed study into a quickly-accessible format for ordinary voters. We hope we have represented the information contained in the report accurately, given the need to summarise in everyday language. Where any misinterpretations might have occured, these are solely ours.

One thing is abundantly clear. Simply removing the Northern Ireland ‘backstop’ from Theresa May’s surrender treaty is not nearly enough. The entire draft treaty needs to be rejected forthwith, as we have argued all along.

A new start is required under a new PM who will genuinely take us out of the EU on 31 October. The report by Global Britain is just another nail in the coffin of the Withdrawal Agreement, but an important one.

No-one – whether a Leaver or Remainer – wants the return of austerity for the next 10-20 years.

Incidentally, it takes a lot of time for team members to distill lengthy academic reports into punchy articles for the general public and get them out to many thousands across social media and using other methods. We think it's worth it. If you agree, would you possibly consider making a donation? Quick and secure methods are below. We reply 100% on public donations and right now we're not close to covering costs. Thank you.

[ Sources: Global Britain | Bob Lyddon Consulting ] Politicians and journalists can contact us for details, as ever.

Has the EURO become 'MONOPOLY MONEY'

I understood Mr Juncker to say that Mrs May has already signed the WA, committing us to all this liability, and as she was signing on behalf of the UK a change of PM makes no difference. I liked and trusted Mrs May when she first became Prime Minister but her actions have been underhand and treacherous all along. What a disgraceful mess: I despair. (Although I remain happy to read reassuring comments from people who know a lot more than I!)

Dear Boris,
Please take the UK 's cash cow out of the EU's pasture before it's too late.

if this BOMBSHELL article and revelations do not focus the minds of even the most irresponsible, deranged Remainers on the necessity to leave the imploding European Union URGENTLY, then nothing will and I can only suggest that they should be sectioned or charged with treason.
Copies of this being sent to as many arrogant hypocrites and traitors as possible, with Theresa May at the top of the list and to include Phillip Hammond, Ken Clarke, the 'squalid' (his term for Leavers) John Major and all those who have been complicit in lying, deceiving and trying to destroy our country. To Boris, for information and ammunition, to Labour and the LibDem loonies.
Perhaps the misguided, delusional and misinformed Stephen Burbages and the Martin O's who venture onto this site will also wake up and embrace the terrifying reality of being aboard a political Titanic which is about to go down and take everyone with it.
PS - In a Hardtalk interview yesterday with an unusually fawning Stephen Sackur, Major said he would 'would put country first' and try to prevent Brexit:- this is the man who put the EU BEFORE HIS COUNTRY, (iillegally) sacrificing our sovereignty by signing the Maastricht Treaty!
I cannot resist this tweet from Simon Richards of the Freedom Association, from February 2018 - QUOTE "John Major cheated on his wife, ruined millions through the E.R.M., led his party to the worst defeat in 150 years and now he's trying to cheat the British people over Brexit. He should stop being a back-seat driver as he once accused Lady Thatcher of being. What a hypocrite he is!"

Comment 4, very well said. Sadly Major is not the only Conservative hypocrite.

Dear elected Members of the UK Parliament who voted to remain in the EU.
Whilst your vote was your own personal choice, you had the exact same choice as the entire UK electorate, whatever your reasons.
There are some remain voting MPs who actually respect the Leave majority, and value UK democracy.
I can respect the way remain MPs voted so long as they fully respect the MAJORITY who voted to Leave the EU?
TO AVOID ALL DOUBTS, I KNEW EXACTLY WHY I VOTED TO LEAVE EU STRUCTURES.
However, It has become increasingly clear you wholly refuse to accept the UK-wide MAJORITY instruction you were given by the electorate, which was, you will agree, both democratic and legal.
Parliament itself handed the decision to the electorate after much Parliamentary debate, and to my knowledge MPs knew exactly what they were doing, yet you continue to treat your voters with absolute contempt after the fact, whichever way they voted - just because you object to the outcome.
UK DEMOCRACY IS NOW IN SERIOUS JEOPARDY, and only MPs attempting to subvert a legal democratic decision will be held fully accountable (unlike unaccountable EU elites we cannot remove from power).
I hope Leave voting MPs will confront remain voting MPs, IN PARLIAMENT with this, and many other articles.
MAKE REMAIN VOTING MPs ANSWER?

The chart up there conveniently leaves out the United Kingdom. The UK's debt is quite a bit higher than Germany's with 85% on par with the EU average and just behind Spain, having less debt.
However, Germany's debt has been declining for many months, while the UK's is rising (for months).

To Chris from London (Comment 8) - The UK isn't in that chart because it's not in the Eurozone.
Countries using the Euro have to get their debt down as part of the EU Fiscal Stability Treaty, or the Euro will shortly come under massive pressure. The point of the article is that the UK will be on the line for the huge bailouts involved. The UK's debt levels are not part of the argument that Global Britain and we made.