Labour, and even the PM, talk about preserving EU rights – which ones?

One of the very many myths about the EU is that it has been responsible for the minimum statutory workers' rights enjoyed in the UK today. This is often repeated, particularly by Labour and LibDem pro-Remain politicians.

Last week Labour leader Jeremy Corbyn mentioned the subject of workers' rights again, in his letter to the Prime Minister, demanding “dynamic alignment on rights and protections so that UK standards keep pace with evolving standards across Europe as a minimum”.

Theresa May is still trying to persuade Labour MPs to back her non-Brexit Brexit deal. She has said that the Government is proposing to introduce a draft bill guaranteeing that UK workers’ rights will keep pace with those in the EU.

4. Finally, workers’ rights are only relevant if you have work

In the area of workers' and women's rights we've shown above, the UK's statutory arrangements are better than those which would be applicable under EU law.

In Parliament in recent months, swathes of Remainer MPs have stood up many times and trotted out the mantra that the British people had been lied to during the Referendum campaign.

Indeed the British public has been lied to on a systematic and epic scale, but the vast majority of the lies came – and still come - from Remainers. Their continuing claims about workers' and women's rights which we have debunked above are just one small example of this. 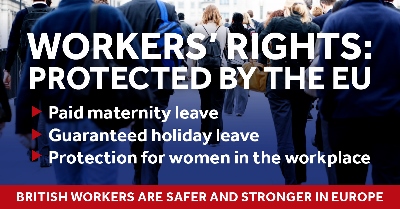 The EU is insisting on a "level playing field" as part of the ‘Future Partnership’. In other words it is trying to prevent the UK from operating as an independent country with its own taxation policies and other frameworks which would make the UK a more competitive country than those in the EU.

What could be a more obvious lack of a level playing field than that of UK businesses competing with businesses in the Single Market and Customs Union having a minimum wage 1/5th that of the UK? Or trying to compete with businesses which don’t face costs of higher holiday entitlements, or substantially longer maternity pay?

With a true, clean Brexit the British people and its Government will want to keep exisiting rights, but at least when the UK leaves it will be able to adopt sensible policies in other areas, to help British businesses compete.

Do Remainers want to go backwards?

The UK has chosen, through its elected representatives, to have workers’ rights which go well beyond those applicable under EU law.

It surprises us that Remainer MPs seem to want these workers’ rights rolled back to match the lower standards applicable in the EU....

MPs seem to have forgotten what they exist for. Some have wholeheartedly embraced the Napoleonic 'top down' EU totalitarianism in their quest for power and self-enrichment, particularly as it means that they have outsourced their responsibilities. They are enabling our Parliament to become as much of a 'pretend' Parliament as the EU Parliament - a potemkin of democracy to fool the people. Representation of the people is just lip service now to preserve their position, and 'party power'. We're also seeing this switch, from bottom up to top down authority, from British Habeas Corpus to the European Corpus Juris filtering through our legal system & with the politicalisation of our police force (sorry, service now). They seem to be moving, inexorably, to rule without the consent of the people.
Your piece neatly demonstrates that many want the outsourcing of MPs responsibilities to continue, so do not deserve to be in the jobs they hold. Ask yourself why do they want a foreign power to dictate 'rights' here without question or scrutiny? Are they saying that they cannot see, & right, evident injustices in our country's laws themselves? Are they incapable of seeing & then implementing 'best practice' from elsewhere unless they are told to by a foreign power? Or is there a more deep insidious and treasonous reason?
Alongside your proven examples, there is an associated 'right' that we take for granted in this country, Bank Holidays. If the date falls at a weekend, workers get the nearest workday(s) off. Whilst I can only comment on The Netherlands, so don't know if it's similar in other EU countries, this is not the case everywhere. If a holiday occurs at the weekend, that is it. No 'day of in lieu'. So if, as happened one year, Christmas Day & Boxing Day fell on Sat & Sun, you finished work on Friday (Christmas Eve) & were back at work on Monday (unless you were working on UK t&cs).

I remember at the time of the referendum Alan Johnson spouting that the EU protected UK workers, which is totally untrue.
The Trade Union movement has a place to fulfill in Labour relations. It falls down in that it is non factual in many disputes. You have to lie if necessary to make people think they are being exploited.
The Labour Party leadership in making these demands is saying thank you to their Paymasters and they have their best interests at heart.

Excellent analysis Not4EU - we are always promised LESS State by politicians but successive Governments always impose MORE State, more control over the people. Even worse, as highlighted, our not-fit-for-purpose politicians are happy to abrogate their responsibilities and hand over and sacrifice control of our hard won freedoms and rights to an unelected dictatorship and foreign powers, most notably, Germany, a country against which we won World Wars! A bloodless coup? Certainly handing victory to the losers, which is precisely what Theresa May is attempting to do with Brexit, but even more outrageous, ripping out our vocal chords in the process.
And yes, without sounding melodramatic, I am now aware that there was from the outset, and still is, a sinister plan, effected under the cancer of Globalisation, and the creation of the EU to 'build a world government' and a federal superstate. Not just the odious Ted Heath, but he and the EQUALLY traitorous Harold MacmIllan, in collusion with *Jean Monnet, conspired to deceive us on an industrial scale regarding entry into the EEC. On entry in 1973, our real annual national growth rate was a record 7.4% - 'the present Chancellor would DIE for such figures'. It made no geopolitical sense to to align ourselves with our then dysfunctional masters and kick our Commonwealth allies in the teeth and the realist De Gualle tried hard to dissuade us, to no avail. The juggernaut was put in motion against strong advice from the then Lord Chancellor, Lord Kilmuir, who pointed out that it would mean THE END of British Parliamentary sovereignty! We now know that this is just the TIP of the iceberg.
So making a surgically clean break from this deceitful, monstrous project is a matter of life and death for our democracy, freedom, sovereignty and independence and our opportunity to thrive, free from the constraints of an imploding nightmare.
.

Thanks Brexit Facts4EU - another good article that sets the record straight. Have emailed it to my MP, Anne Milton, Minister of State for Women, and for Skills and Apprenticeships. She voted to Remain. I suspect from past emails from her that she covertly supports a 2nd referendum; as a Minister she always votes for treacherous Theresa's surrender document - so can I take it that now, also, she wants women to lose 38 weeks’ paid maternity leave?