If Scotland doesn’t want the UK, does the EU want Scotland? 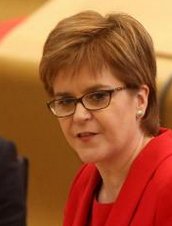 Brexit Facts4EU.Org turns the spotlight on Scotland, one day early

In her New Year message today, New Year’s Eve 2019, Nicola Sturgeon says Scotland will be at the "centre of international attention" in 2020. In our final report of 2019, Brexit Facts4EU.Org looks at Scotland and the United Kingdom, in relation to the European Union.

1. The EU Referendum and Scotland

In the 2016 EU Referendum, Scotland voted by 62.0% to 38.0% to remain in the European Union. This was the highest percentage of any of the 12 regions designated by the Electoral Commission in its official results. It was even higher than the London region, which polled 59.9% for Remain, and with the total number of votes cast in London alone being 41% higher than those cast in Scotland.

Some basic facts about the EU Referendum and Scotland

An integral part of the SNP’s campaign for an independent Scotland is that Scotland will rejoin the EU.

3. Could an independent Scotland join the EU, and by when?

4. What does the EU require before Scotland could even be considered as a potential member state?

At this point, the EU will able to add Scotland to the list of countries which are already in the queue for membership: Turkey, Albania, North Macedonia, Montenegro, and Serbia. These are the officially-recognised countries. In addition, Kosovo and Bosnia & Herzegovina are recognised by the EU as potential candidates for membership.

Strategically and politically, the Balkan countries are important to the EU in its enlargement plans.

Before an independent Scotland could engage in any substantive talks with the EU, all 27 existing member states would have to approve. This is one of the areas of EU policy where each member state still has an absolute veto.

If just one of the member states objects to the idea, the EU Council (of the leaders of all member states) would instruct the EU Commission (responsible for EU enlargement) either not to proceed, or only to hold informal talks.

Currently the EU Council is holding up discussions with some of the countries which are already on the official list.

One of the big issues for Scotland is the problems that some EU member countries already have with their own secessionist movements.

The most obvious example is Spain and its Catalonian separatist movement. Generally unreported in the British media, this is still a burning issue in the Iberian peninsula. There are numerous other secessionist movements across the EU, and none of the governments of the member states involved wish to give hope to the proponents of these causes.

7. Finally, what are the other hurdles for Scotland?

Aside from political considerations, and if an independent Scotland were somehow to navigate these, there are some basic conditions for EU membership. As things stand, Scotland is not even close to fulfilling some of these criteria.

To do so would mean substantial cuts in the Scottish Parliament’s economic plans, affecting the majority of the Scottish people. We will report on this tomorrow.

Coming tomorrow: "Will the Scottish people vote for economic EU-reunion?"

Plus, exclusive comments to us from an MEP and former Scottish parliamentarian.

Firstly, we wish a happy new year to all our readers.

We can only now ask if you wish us to keep going in 2020. If so, how do you feel about us cutting back to publishing on only Tuesdays, Thursdays, and Saturdays?

Clearly we would only be producing less than half of the output we have produced daily in the last four years but if the appetite isn't there to fund this, then we now have to make cutbacks. Four years is a long time for the Brexit Facts4EU.Org team to have been subsidising this effort, and sadly only a small fraction of our readership have been able to support us with donations.

We are interested in your thoughts. Even reducing to three publishing days per week assumes the current level of donations will continue. And naturally if any readers could make donations today, we would be delighted! Quick and secure donation methods are below, as ever. Thank you.

[ Sources: EU Commission | SNP ] Politicians and journalists can contact us for details, as ever.

Excellent article. I never understood why the Westminster parliament has nearly 50 Scottish MP's, and most if not all are beligerent. They have their own parliament, so why are these almost 50 not sitting up there? No one has explained this to me, everybody I ask shrugs their shoulders in a way reminiscent of the 'Gallic shrug'.......
Would these 50 not be more usefully employed in their own parliament bettering the life of their fellow Scots?

Do the SNP Scottish people have any idea about the countries of the 'enter-the-EU-club' they are planning to join (Turkey, Albania, North Macedonia, Montenegro, Serbia, Kosovo and Bosnia & Herzegovina)? If the answer is 'not much' then I suggest they book their next holiday in at least one of these countries. Who knows, they might even change their mind about who they want to be associated with - the Balkan countries or the UK? Tough question, I'm sure...

A border with a non member State (England) and the requirement to join the Euro must be two major problems.
Unlike the NI/Eire border there are not too many crossings to cover with Border Posts.
I think the Scots would still want freedom of travel to England without any restrictions as enjoyed by the Irish under the CTA.

Of course to be fair to the Scots, maybe they are as peeved off as the Northern/Midlands/Welsh? All areas other than London have suffered from the last few governments.
The UK has to become less London-centric, less Liberal, less socialist, less Green, less marxist for the country to survive.
There are acorns of hope coming up everywhere regarding most of these issues, except the climate change scam. On that one issue the UK is travelling on the road to disaster. China, India, Australia and others are bringing on many new coal mines and producing energy this way. Yet we and the Europeans are in the midst of a climate emergency............... which even the conservatives are under the spell of. All about control.

"Scotland must be an independent country before the EU can even start talks about possible membership
If it did otherwise it would be interfering directly in the politics of another country (the United Kingdom)
Nonetheless, the EU has done just that, holding meetings with SNP politicians"
If the EU had interfered with any other sovereign nation think what might have happened.
Oh forgot IT DID, causing bloodshed in the Ukraine.
The EU says , deceitfully, that it was the sole entity for peace in Europe, whilst instigating conflict in the east.
The sooner we are completely free the better.
This will not end well.

What would happen if we ( the UK ) were attacked ?
Would Sturgeon want a vote on Scotland’s position ? All the while of course London is burning.
With regard to the 50 Scottish MPs , so they get a say in what the rest of the UK do , but we get no say in what they do ?
What happens to all the great Scots living in the rest of the UK ? Do they get Scottish Pasport’s ?
Can someone , anyone , tell me what Sturgeon and her cabal have done for Scotland ? At What cost ?
This lady is seeking glory and really should be hauled before the courts for working against her own country by sharing information with the EU political machine .... in days gone by that might be viewed as treason .
See how this lady would feel if we decided to have a referendum in England on “ do we want Scotland as part of the UK “
She encouraged insults thrown at the US president , apart from good or bad diplomacy , his mother was Scottish.... something I think many Scots would be very proud of , not to mention his SCOTISH relatives.

If Scotland is to be the centre of attention in 2020, then Ms Sturgeon needs to do something to make sure that it is the centre of positive attention. Just now, look at the headlines in Scotland, and elsewhere, the news is unflattering. Children dying in a new hospital because it wasn't built properly. Education standards plummeting. All the while, Ms Sturgeon devotes her time and attention to IndyRef2 and support activities (many below the radar).

Number 4 is hilarious. A waste of space.Unconcelrned

The EU will have to agree to support an independent Scotland with substantial funding if Westminster withdraws from it's obligations. And the EU is currently worried about the UK contribution stopping or reducing after Brexit.
Money will be an important issue.