If you think the BBC’s journalists are opinionated and anti-Brexit, try this from Germany 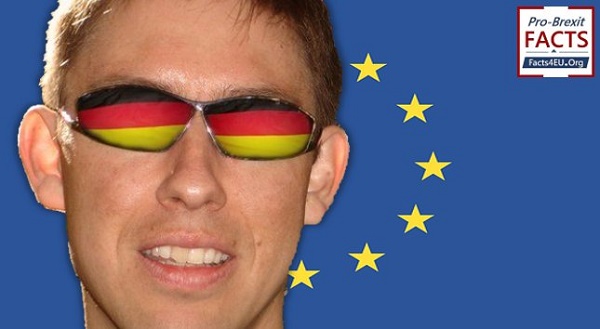 ‘Brexiteers lied all the time, Boris is brainwashing the people, the UK is now the enemy’

This article constitutes an epic rant against Brexiteers, Brexit, and the British Government.

>From the outset we must make it clear that this appeared in the opinion section. Nevertheless it is written (in English) by the senior Brussels correspondent of this international media organisation, which is funded by the German federal government.

As such it gives a rare insight into some of the thinking of the continental media regarding Brexit, and about the UK’s new Government.

The full article is available in English here

“It was almost shocking to see how little impact arguments against Brexit, and for a close relationship with the EU, have had.”

“Johnson's talk of "Canada-plus" and striking a great deal with the EU is just empty rhetoric. In reality, this is simply the manifestation of the well-known right-wing Conservative project to further deregulate the UK and transform it into some kind of international buccaneer.”

“Parliament no longer has a say… An ironic turn of events, given that Brexiteers had always argued leaving the EU was about returning power to their very own ‘mother of all parliaments.’ This was, simply put, a lie — just like almost all other arguments put forward for Brexit.”

“Likewise, the bill no longer pledges to align British workers' rights along EU standards, and has watered down the rights of refugee children to be reunited with their families.”

“This marks a victory for those who want a hard Brexit, who want to sever all ties with the EU. They are ecstatic. And Johnson, it is now clear for all to see, is not the moderate Tory he masqueraded as during the election campaign.

“Now that the path to a hard Brexit has been paved, Johnson is trying to effectively brainwash the people… Johnson wants to bring [the country] together again — by telling Brits to stop discussing the matter.”

“Johnson's behavior so far is inspired by the right-wing populist playbook: He has peddled countless lies, deliberately misrepresented reality, persistently employed hyperbole and clouded peoples' minds through propaganda. This is behavior we have seen by many other populist regimes across the world. And, in this populist vein, Johnson now wants to axe the funding for public broadcaster BBC. Its journalists, who could have done more to scrutinize and question Brexit, are in Johnson's view too independent and lack loyalty towards the government.”

“Nobody, in short, should be lulled into thinking they can trust Johnson when he talks about "neighbours and friends" on the continent. This is merely part of his carefully cultivated facade, just like his unruly haircut.”

“It is a painful but simple fact that from now, one will have to be extremely careful in dealing with the British government and prepare for all kinds of trickery. Johnson cannot be trusted, and neither can his Brexit negotiator, Michael Gove. Both will do what ever they can to take advantage of the EU. The bloc will have to treat Britain like an adversary when it negotiates its future relationship with the country, a trade deal and other things — a tragic nadir after decades of good neighborly relations.”

“Deutsche Welle is Germany’s international broadcaster. We convey a comprehensive image of Germany, report events and developments, incorporate German and other perspectives in a journalistically independent manner. By doing so we promote understanding between cultures and peoples.”

DW has “a legal mandate through television, radio and internet” and says it reaches 197 million people each week in 30 languages. DW is financed by German federal taxes.

In our view, ‘opinion’ pieces should be reserved for outside commentators, politicians, and experts in their field. When an opinion piece is written by a staffer of a media organisation – and published by that same organisation – then it inherits the authenticity and reputation of its publisher, whether intentionally or not. And when the funder of the publisher is the German state, this is not a good look.

Call us old-fashioned but we believe that state-funded reporters should report. Their personal views should be just that, and these should not interfere in the reporting of facts.

Deutsche Welle does in fact produce good journalism. It does a good job in reporting on a wide range of stories from Germany and around the world.

Please just report facts and let your readers’ and viewers’ minds do the rest.

Finally, we suggest that DW journalists stop reading the Financial Times, the Guardian, and the Economist, (and stop watching the BBC), if they want to understand Brexit the and British people. We know that these are the primary sources for information amongst Brussels correspondents from EU27 countries. Instead perhaps they might wish to review the results of the general election to get a better idea of what is really going on in the United Kingdom.

It's almost Christmas and we're still publishing unique content each day. If you would like to keep reading us each day, please make a donation today. Unlike DW and the BBC, we receive no state funding. Thank you.

[ Sources: Deutsche Welle ] Politicians and journalists can contact us for details, as ever.

They are right about Gove.
So far I have managed to avoid buying anything German this Christmas, except for receiving a present delivered by DPD.

We could all do with far less OPINION pieces by state-controlled medias.
Just imagine if BBC/DW etc stuck to reporting facts, as they used to without adding opinions/slants. Just imagine how much more respected these publishers would be.

If ever an endorsement was needed for the decision by brave, informed and patriotic Britons to leave the poisonous clutches of this Federalist EU nightmare, this spurious, propagandist filth being peddled by the German MSM confirms how right we were to vote to leave, not just in the interests of the survival of our nation, but to yet again refuse to allow Germany to subjugate and dominate us.
I agree, however, that Gove is not to be trusted, but not in the sense that the Germans are implying, simply because had it not been for his treachery, Remainer Theresa May would not have slithered into power and Boris would have been well on the way to Brexiting Britain when there was almost universal voter assent. He and May are responsible for fomenting 'war 'in their own country and subjecting us to more than 3 long, agonising yeas of being damaged by and shackled to the hideous EU and paying £50 million A DAY for the privilege of our nation being destroyed by 'death by a thousand cuts' by a malign foreign dictatorship.

Journalistic hyperbole rant that could have been written by the Guardians reporters and their ilk. An opinion with no facts.
The word populist pops up.
Populist meaning in English: a person, especially a politician, who strives to appeal to ordinary people who feel that their concerns are disregarded by established elite groups. Populists typically present "the elite" as comprising the political, economic, cultural, establishment - the European Union.
Our general election gave the Public the opportunity to return to Westminster the POPULISTS they want to represent them.
You cannot be a populist and be in the EU, which is run by a NON elected POLITICAL ELITE..

Off topic: It would seem that we, the public, have up to January 13th to influence any change in the Withdrawal Agreement Bill (aka Surrender Treaty)?
https://www.express.co.uk/n...

And this crackerjack:" Rapper and BBC Christmas Message Star Stormzy: Britain ‘100 Per Cent’ Racist" from Breitbart - where do they drag these guttersnipes from?
What a lot of absolute rubbish. If Britain was so, it would not have experienced the madness of diversity for the sake of diversity.

The Brexit misnomer - trying to define leaving the EU as HARD or SOFT.
It can mean only one thing, the United Kingdom is independent of the EU and the Brussels Parliament, the current Treaties are revoked. The United Kingdom has yet to sign a withdrawal Agreement with the European Union to withdraw on 31st January 2020.

Very interesting that the DW article explicitly says the EU will have to treat us as an adversary during the negotiations.

Yes as 4 Barbara says 'if ever there was an endorsement was needed for the decision by brave, informed and patriotic Britons to leave the poisonous clutches of this Federalist EU nightmare,'-Well well, Ladies and Gentlemen I would hazard a guess that they (EU) are running scarred and really still cannot or are unable to come to terms with the fact that the UK is leaving. The EU as it now stands is very shakey, as can be seen from its incompehensible financial present to Morocco. They seek friends amongst the Devil's cellar.